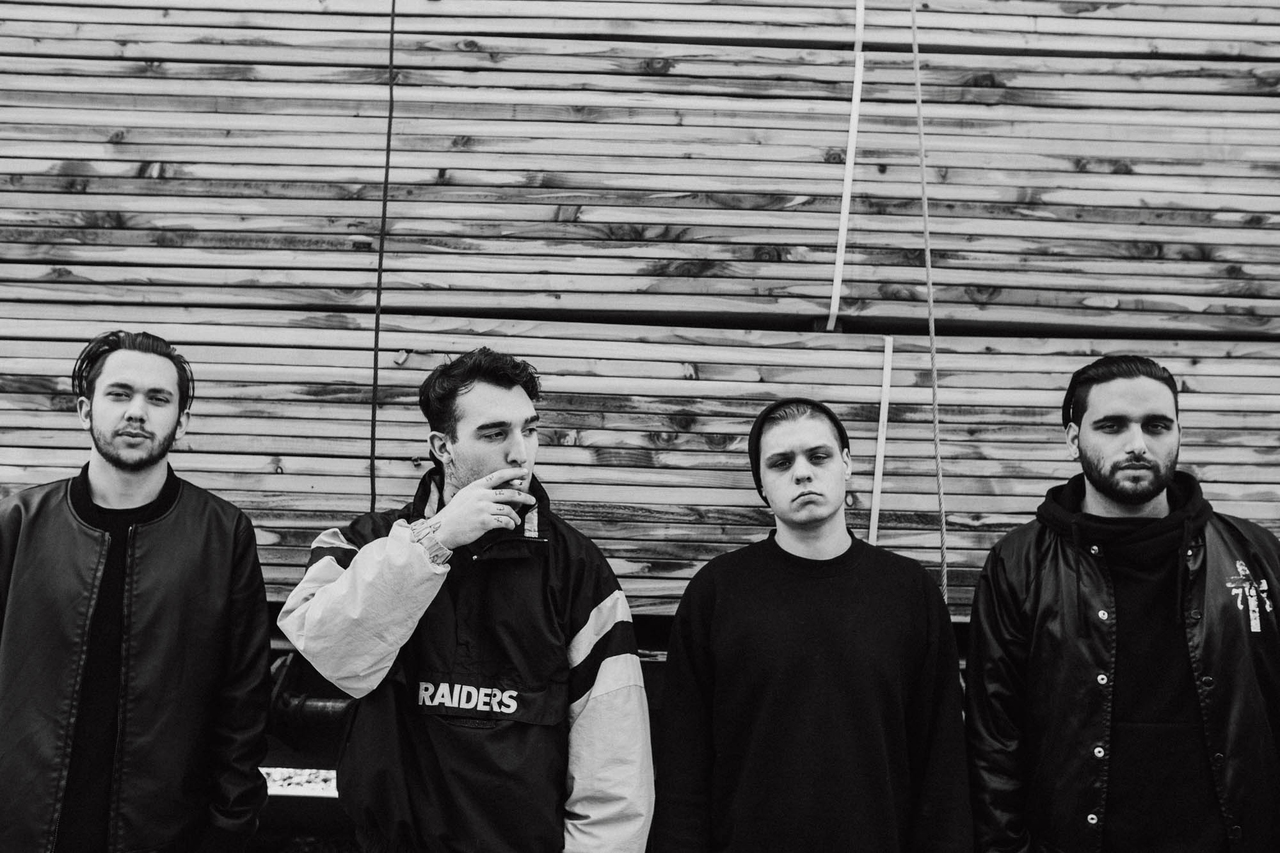 Only releasing their debut record Smile a few days ago, Cane Hill are a band wrapped around in controversy with their mixed nu-metal sound from heavy bands such as Korn, Pantera and Slipknot. Lying across the spectrum of bands mentioned, they’re an oddball outfit, creating material one you’ll either despise or absolutely love. It’s safe to say that the four-piece from New Orleans have shown their true colours in this release; being heavy, aggressive and really showcasing their weird antics coming through with their music. Joining the craze of Pokémon Go, frontman Elijah Witt was excitedly naming all the Pokémon he had caught for the day, having some time off before another run of dates for Warped Tour. However, he was more concerned with what fans he was gonna catch with the debut record.

“It’s pretty fucking stressful,” He admits while talking about his feelings towards the debut’s release. “I think most of the time, I try to purposely block out the fact that it’s coming out soon because there were some thoughts/doubts surrounding it and the expectations for what it should sound like in people’s heads. I really think they’re either going to fucking despise it or they’re gonna be willing to move along and develop with it. The way I see it is, you can’t sell out on your first album. So we wrote rock songs that we wanted to push for the radio; we wrote heavy songs that we liked and then we wrote some weird bullshit that sounded kinda strange so I’m stoked but I am also very much prepared for people to give us shit.”

Despite Witt’s nerves surrounding Smile‘s release, he lit up as he spoke about the producer responsible in making the recording process happen: Drew Fulk.

“Drew was easily the extra member – the hidden member of our band,” He says.”He’s not even hidden, like we write music and it’s fine but Drew has this weird fucking mind. He’s a weird dude and without him, I don’t think we would have what we have. He understands music in this really weird, philosophical way. It’s kind of like James [Barnett] our guitarist – like they’re weird musicians so it definitely helped us a lot to make sure everything was right.”

“I’m fucking over it – that’s why its so important for me to have that message but I also want to make sure I’m not doing it in a way where it’s in your face.”

With Fulk’s support in the sound direction Cane Hill were going towards, he saw something in the band no other producer could see. With all the craziness happening from the debut record, he too shared great enthusiasm for the creative minds of the metal four-piece, encouraging them to bring out the best version of themselves as musicians.

“I feel like there’s different types of producers. There’s producers that specialise in mixing or they specialise in writing. Drew definitely specialises in writing. He’s a fucking good writer and he knows how to make things catchy and that’s why I really like working with him because we can send the shit off we mixed, we can send the shit off to get mastered or whatever the fuck you want to have done,” Witt continues.

“Having somebody there that knows what you want to do and knows how to help you write it especially if you’re struggling to get the words out or struggling to get a riff going or you’re second-guessing yourself, he’ll just take the guitar and go “Why don’t we do this?” or he’ll hop onto the computer while we’re writing lyrics and he’ll be like “How about this?” He keeps the creative juices flowing and he plays fucking mind games, knowing how to get into your head while making you do things that you might be afraid to do but he knows it’ll be beneficial.”

Some may have found Cane Hill a little strange but one thing that really uncovers their brilliance is their message of leaving the status quo and being who you want to be as a strong message that comes through with Smile. As Witt speaks, you can tell how much thought it took to actually write the honest lyrics and the boldness it took to get to that point. Over the past two weeks, the world has seen terrible events happening; from the shootings in Dallas and the truck running over several people during the Bastille Day celebrations in Nice. Smile executes this idea on how people are so divided with their beliefs, which in return result in war, crime and violence.

“I mean, look at how much Homophobia, Racism, Islamophobia and Misogyny there is – there’s so much fucking going on,” He says. “There’s just so much hate for people being who they are. It’s like 2016 and you’d think people would know by now that you can’t fix someone who’s gay because there’s nothing to fix. I’m fucking over it – that’s why its so important for me to have that message but I also want to make sure I’m not doing it in a way where it’s in your face.”

Passionate in what he stands for, Witt hopes that people will listen to Smile with an open-mind; to take the time and understand their music while appreciating their honest yet zany work of art. With music that is far from conventional, having a curious mind on what Cane Hill are all about really pays off in the end because it takes courage to release something out of the ordinary, and they indeed have proven to be warriors of that kind.

“I’m hoping people figure it out,” He says. “I want people to read interviews, I want people to listen to the music and read the lyrics because I’m not going to blatantly explain and write down what every song is about. I want you to take what you can get from the record; have people figure out that this is clearly about the problems with sexuality or the problems with Race and how the world needs to be fixed right now.”

We feel you, Elijah. We really do.

Cane Hill will also be supporting Bullet For My Valentine on their Australian Tour. Check them out on the dates below!

Tickets can be purchased HERE