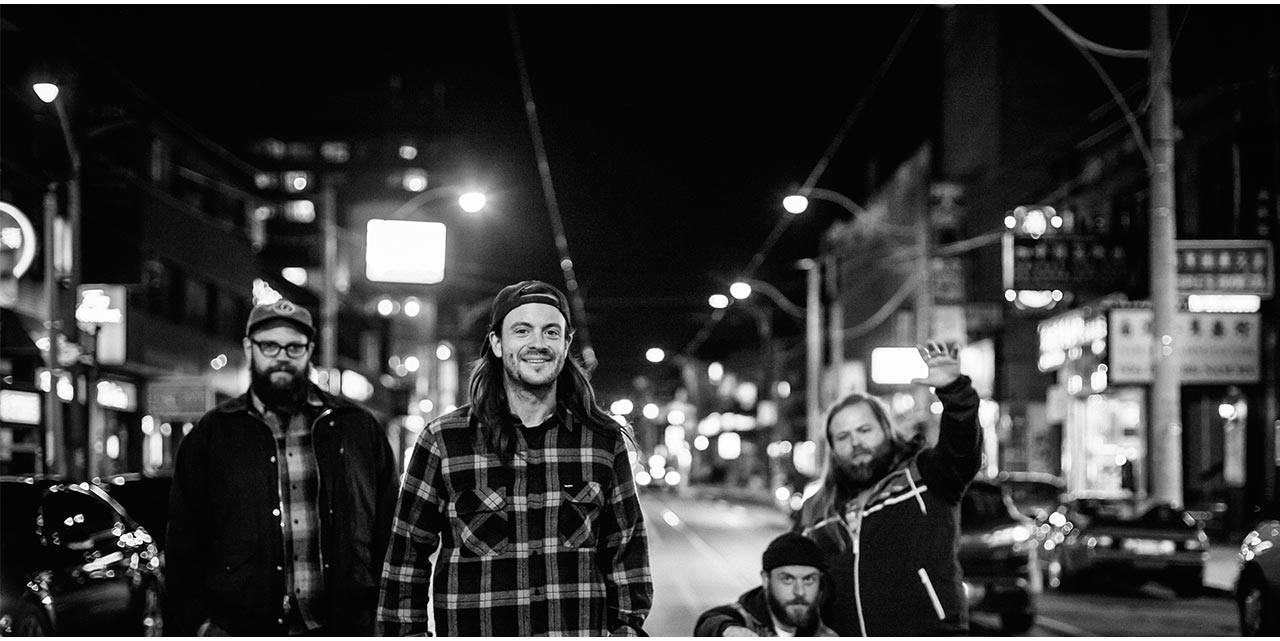 After a long hiatus for a headline tour, Cancer Bats are coming back to party with us down under in just a few weeks for a string of city and regional shows!

Thanks to our friend Janine from Cooking Vinyl, we got the chance to have an awesome chat with one of the coolest guys on the planet, Cancer Bats lead singer Liam Cormier!

SR: You haven’t been here for a few years, how excited are you to unleash your shows upon Australia again?

We are way too excited to be playing this tour. Basically this has been like a tour in the making for forever. When we first came over in 2007, we only played three shows and we were just like “ Ahh, these shows are rad! We need to actually like tour Australia with an Australian band and actually do the big five!” So now that we’re actually going to do a full one with like regional dates. Especially getting to do it with a band like High Tension- like a rad, Australian band I’m like way too excited about too!

SR: Your newest album Searching for Zero has gotten a lot of great reception, even getting a 4.5/5 rating on our site. How has the reception for the new songs been at shows?

At shows it’s been going down huge! That’s like, the testing ground. Reviews are awesome but, if kids aren’t partying then you’ve failed [laughs]. So you know, when we bring out like Satellites, Arsenic- kids have been singing along to Devils Blood now, which is so sick! We’ve been playing Beelzebub- which has been going down huge, True Zero. We’ve just done All Hail at the GWAR-B-Q and people were singing along and ah, it was the best thing ever. I can’t even begin to say how happy I am with the response from kids!

SR: What is the set list looking like and are there any songs you’re really excited to play?

That’s the thing, we’re so pumped on this record and playing it live and how all these songs are going down live, we want to play a lot of the new album. That being said, I know we haven’t done like a proper headline in like a super long time, so we’re definitely going to be playing a lot of old songs off of all the records just to have that party vibe and to have the whole discography represented.

But we’ll throw in some twists too, definitely doing some covers. I know people want to party so we’ll just try and play as long as they’ll let us.

SR: It’s been said that you’re a pretty amazing, almost perfect band live. What do you think you do to achieve this status?

Ooh, I don’t know about that, we make a lot of mistakes [laughs]. I would say it’s like slightly good, above average, I would never say perfect. The reason being is that we definitely have a really good time. We’re way more into like head-banging and giving the mic to the crowd and partying as heard as I can. That means that sometimes you might like, fall over instead of singing a part. You know if Jay is like, throwing a microphone instead of singing into it- I’m way more into that vibe.

I feel like we just try and smash it and hopefully people will just pick up on that vibe and party along with us. Even if they don’t, it’s still tonnes of fun. SR: As you’ve just said, you’ve just come off GWAR-B-Q playing alongside bands such as Goatwhore, obviously Gwar and Ghoul. How do you feel coming off such a huge line-up to playing smaller, intimate shows over here?

We love headlining, that’s our main kind of jam. This time around with this record that’s all we want to do, we just want to play small, party shows that are packed with kids that are there who want to have a good time. Obviously playing huge stuff with GWAR, and to tour with Danzig and Pennywise– those are opportunities we’re not going to pass up, but when it comes to the main touring we want to do for every record is to play headlines and have a good time.

SR: Speaking of playing with Danzig, are there any other bands you’d really love to play a show with?

There is a bunch as bands are putting out records or bands doing like reunions. Like when Quicksand was doing their reunion shows I was like “I wish we could play those shows!” you know like I’ve gotten to know Walter over the years and he’s such an amazing dude, and I would love even moreso now that I know him to like, see those songs and get to watch one of my favourite bands.

Oh, we definitely want to tour with Clutch. Like they played some of their new songs at GWAR-B-Q and I was like “Aw, this is going to be amazing! This new album sounds incredible. All I want to do is go on tour with Clutch now!” [laughs]

One band that we’ve been trying to go on tour with- we’ve offered them a lot of tours and it obviously is really tough. But we’re all super into Violent Soho and we really want to tour with those guys. We know them all and were super awesome the last time we met, and hopefully we’ll get to hang out when we’re in Australia this time, but yeah, we really want to bring those guys on tour sometime maybe in the future.

SR: You’ve started up your own clothing line called Treadwell, can you tell us little but about it and will you be selling any at your shows here?

Yeah! It’s like a clothing line that I just started and basically I’m pretty into motorcycles and my girlfriend owns a motorcycle store called Town Moto – which everyone should also check out. So I started a clothing line to sell in her store, maybe try to sell it in other stores, but I was thinking about bringing some stuff to Australia and just selling it from the merch stand- if people would be into that. I feel like kids in Australia would like tie-dyed shirts and hats and long sleeves, so maybe I’ll pack a bag and bring some stuff and spread the word!

SR: Do you have any memorable fan stories you could share with us?

I feel like anytime we meet kids who have like Cancer Bats tattoos, I feel like that’s always such a trip. You know what I mean, because we have band tattoos and I know how much that means to me as like a fan, I don’t have a tonne of band tattoos- just bands that a really important to me. So when I meet kids that have Cancer Bats tattoos or want ME to write something. There’s these kids in Alberta who are the best, they’re like the raddest kids, love hanging out with them and I wrote “DSOL” and I wrote “Road Sick” on the other guy’s knuckles- and they definitely had them tattooed like, the next day! When I saw them a month later they had like MY handwriting tattooed on their knuckles forever! And I was like “that is crazy!” to me it’s such an amazing thing to have happen.

SR: So what band tattoos do you have?

I have a big thigh Murder City Devils tattoo. I have a Black Sabbath- Electric Funeral ­one that Mikey, Jay and I all got while we were touring Bat Sabbath, doing the co-headliner tour and we got that on like one of the last days. Oh and there’s a band from Canada called The Swarm and I have lyrics from that band tattooed on me. I just have three, I guess that’s it? Then I guess I’ve got tonnes of Cancer Bats ones [laughs]