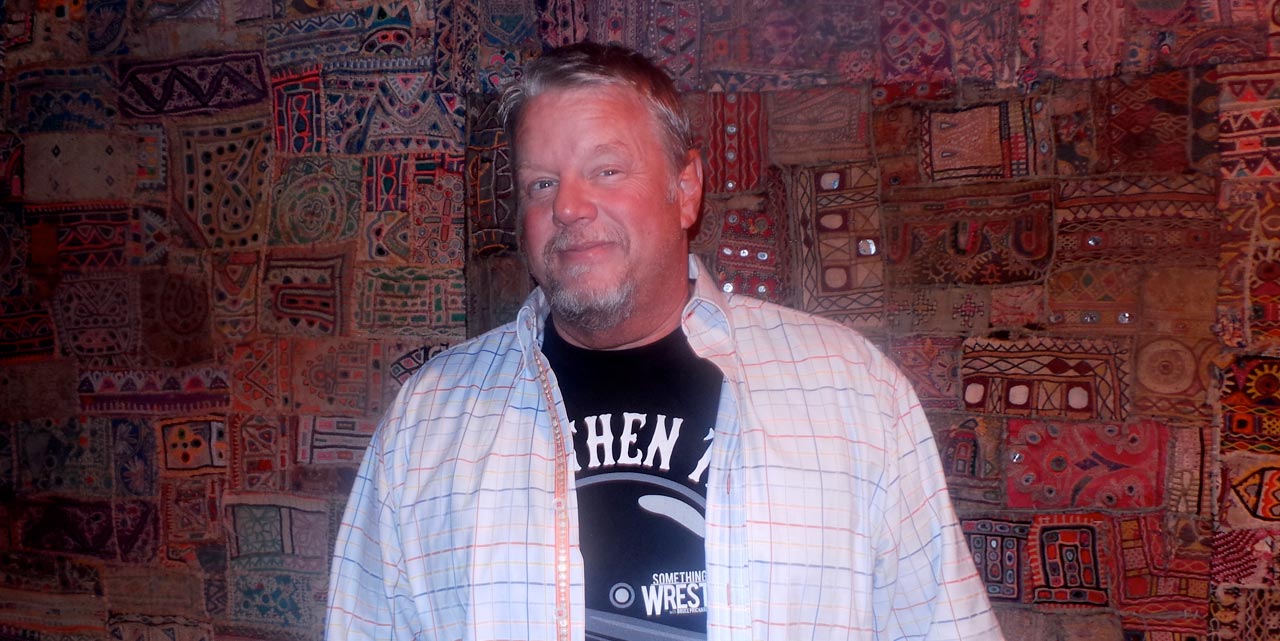 If you grew up watching wrestling like me, you’ll have heard of the WWF (now the WWE) going about Monday Night War for many years with WCW. Not only getting to work as a wrestler/manager during those years of war, Bruce Prichard also had the privilege of working as a writer that had you loving/hating stars with every fibre of your body!

Prichard is taking the long flight from the US to Australia to talk this weekend about his experiences and there was no way this long-time wrestling fan would pass up the opportunity to some well treasured one on one time. First topic of conversation was about why now was the time to come to Australia and Prichard let out a small chuckle, quipped “because they asked me to!” before happily stating “I tell you, Australia is a dream destination; it’s on my bucket list, as it’s one of the few places in the world I haven’t gone! I’ve always wanted to go, so the fact that I can do it as part of a tour, tell stories and have some fun makes it even better. Unfortunately, I think I only have a day and a half before the first show and about a half day after the last show, so it’s going to be a quick whirlwind tour…but it’s still better than nothing!”

Opening the can of worms that is Prichard’s contribution to wrestling, it was time to talk about his time in front of the audience as either a wrestler or manager. Touching on some of the best and worst things he ever experienced in the ring, Prichard started off by talking about the better times; he was quick to reply “from Brother Love’s perspective, it’s hard to look past some of the opportunities that were forwarded to me. I mean, it doesn’t get much bigger than working with Hulk Hogan at the time he was not only the hottest wrestler in the world, but one of the hottest celebrities in general. So being able to go out and work with him in front of a live audience, it doesn’t get much better than that; that was an awful lot of fun and an experience I’ll never forget because the electricity was beyond belief. From a manager’s perspective, getting to perform later on with The Undertaker was a big kick as well.”

Deviating from the question at hand to talk further about The Undertaker, Prichard had nothing but praise when quipping “I don’t think you could ask for a better human being in general, as far as the person behind the character; so that made it worthwhile as well. The journey was lot of fun to work with him and it was rewarding; plus, it wasn’t a struggle, as you didn’t have battle him along the way…but when you did, it was still enjoyable as he wasn’t a jerk about anything!” Prichard then explained how “I’ve never gone to work in my life…actually I take that back! I went to work for three weeks one time selling cars; well not selling cars…But when it came to wrestling, I enjoyed every minute; even when it was difficult, frustrating and not as much fun, I still enjoyed it. I was doing something that I was passionate about and not everyone gets to do that! When you realise that, you realise that the grass isn’t always greener on the other side; you just tend to find whatever enjoyment you can out of the hand you’re dealt.” before delivering a story that had this interviewer in stitches:

“I do remember one funny story where we were in the UK; when you go overseas, not everything especially technically is what you’re used to. Whilst we over there, we were in the middle of a live shot backstage and I could hear chatter on a headset; it turned out to be commentator chatter, but I didn’t know it at the time. So not knowing where it was coming from, I started unplugging things during the live shot…I ended up unplugging ALL of the audio for EVERYTHING backstage. So, we lost everything backstage, whilst live on the air! As everyone was going nuts and trying to figure out what the hell was going on, I sheepishly walked into the truck and said “sorry, that was me…I screwed up.” I mean I heard something, and I didn’t know how to fix it, so I just started unplugging until it stopped; eventually it did, just for everybody, everywhere!”

Returning full circle to the best/worst things he has experienced, it was time to tackle this from the time that Prichard spent writing and behind the scenes; Prichard was quick to explain “anytime that something starts out as a vision in your head and ends up coming to fruition in a big way is just phenomenal! A very big example I can use is Eddie Guerrero and his path to the WWE championship; it was an incredible story; an incredible path and I was very proud to be part of that. It was real, it was deserved and most of the audience really connected with it, as they could relate to Eddie’s journey. It’s rewarding to have a silly idea in your head, spit it and out and be able to create something from it; something like the Undertaker and Kane being brothers and telling that whole story along the way. In regard to the worst, you try to forget your failures (laughs) but you try to learn from them too, so you don’t make the same mistakes over and over! Nobody bats 1.000, but we had a good track record getting out there telling stories and creating characters; I’d say we were batting between .650 & .700 and I think that’s pretty good…shit, I’d take .500. I mean we had some bad years where nothing resonated with the audience, but as you go on, you get over that and can either wallow in it and stay there or get out of it creatively and move on.”

The topic of conversation moved towards the WCW and Prichard was VERY quick to make it known “I don’t have any distain for WCW at all! It was just a different company, a different product and there were a lot of people in the south who’s only exposure was WCW; then you go to the north east and a lot of the audience members were only being exposed to WWF/WWE. So, to them, the other guy was the enemy as they had grown up on one particular brand; so, it depended on what you were exposed to. But for me, I was an NWA guy growing up in Texas! But getting to work in the WWE and participating in that creative, it made me a fan and I always enjoyed it.”

The hottest topic in the wrestling world throughout the 90s and early 00s were the Monday Night Wars between WWF/WCW; if you weren’t lucky enough to be able to watch both, battle lines were drawn and warpaint was applied! Taking time to reflect on this major part of his life, Prichard let out a small chuckle before going into great detail:

“It’s funny in a lot of ways because everyone goes on about how “WCW kicked their ass for 83 weeks”; okay, for 83 weeks they did. They didn’t kick our ass, but they gave us a very good throbbing in the very beginning. Not only were we able to come back and defeat them, but they weren’t able to sustain it and went out of business because of a lot of decisions made. So, I point to that and say “83 weeks? Come on, that’s like a year and a half”; try doing it for five years, ten years, twenty and so forth like we were able to do. You have to look at things as if it’s business and I took it very personal at the time; I mean, that business affected my livelihood, how I ate and how I paid my bills. At the end of the day, you can choose to view the opposition as an enemy, or you can look at them and think “whatever they’re doing is working…what can I do to learn from them?” Then you adjust your plan to try and learn from your competitor, instead of just saying “they’re bad and they’re the competitor…so screw them”; you have to find the positive in it. You need the competitive company to help you keep your edge. If you don’t have someone nipping at your heels, you’re doing something wrong; if you get complacent, you’re definitely doing something wrong!”

Whilst Prichard spent most of his wrestling career working with the WWF/WWE, he found himself working for TNA between 2010-2013; taking time to reflect on this part of his life, Prichard was quick to point out “it was a completely different attitude for number one! It was almost a bit of a vanity project in some ways, as it was a company that didn’t necessarily have its business defined. I still have the notepad from the first meeting with them and there was three different people; I asked, “what business are you in?” and nobody could answer that question! If you can’t tell me we’re in the TV business, the live event business, the promotion business or a mixture of all the above, there’s nothing to focus on. They were confused by the question and their response was “well we’re TNA…we’re a wrestling company.”; but what does that wrestling company do. I mean your product is wrestling, but what’s your business model…is it to produce television, is it to produce live events, is it to do special events? Whilst I wanted to focus and refine it, they were more interested in how they did 300 people and our procap on merchandise was $50 per person. The best example I can give about difference between WWE and TNA is when I was working for TNA, I got a call from Dixie at 3:30pm on a Friday afternoon and her first words were an apology for calling me on the weekend. The flip side to that is the WWE who is 24/7; you could get a call at 2am and it didn’t matter, as you were expected to be thinking! Whilst it was a different experience, I had a lot of fun there and enjoyed my time creatively.”

Drawing the interview to a close, Prichard was enthusiastic when he concluded with “I’m just really looking forward to coming to Australia and I hope everyone can come out to the live show! The beauty of the live show is I can tell stories I can’t necessarily tell on the podcast for numerous reasons…whether they may be too risqué, too much of an insight or a little too personal. Plus, I prefer to share those stories with a live intimate audience, instead of broadcasting it everywhere; so, if you want to hear some stories I can’t tell on the podcast, this is the place! There’s also going to be a lot of audience interaction, maybe singing a couple of songs and possibly doing a jog or two.”