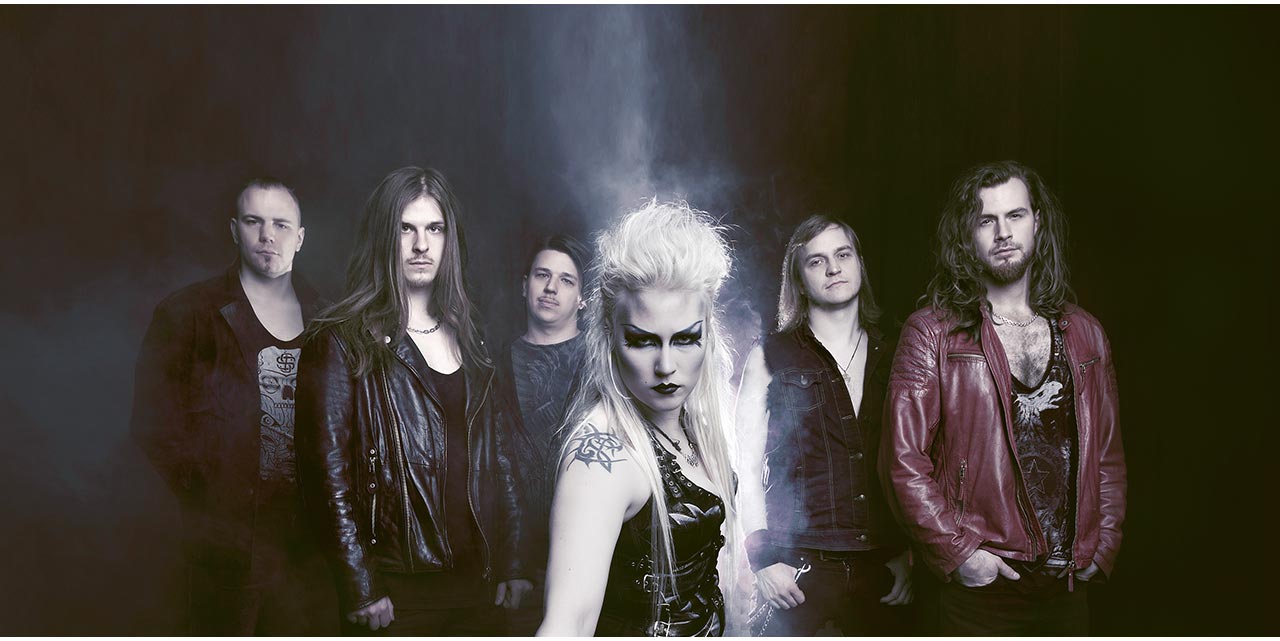 Finland’s Battle Beast have returned to the spotlight with their fourth studio album, ‘The Bringer of Pain’, their first release following the departure of long-time songwriter Anton Kabanen from the band.

Thanks to our good friend John Howarth of Nuclear Blast, we had the chance to have a chat with the bands’ amazing singer Noora Louhimo, in order to find out more about her personal journey as a musician, working without Anton on the new album, and much more.

SR. You studied classical singing at a very early stage, and not you are fronting a very well-known Metal Band. What can you tell us about your personal musical journey?

NL. Since I was a little kid I always liked to perform in front to people. With my brother we used to dance, sing in front of our parents and friends, competing against each other to see which one of us will get more attention (laughs).

My first memory of how I wanted to get into performing was when I was 4 years old, because I saw these children singing competition on TV and I said to my parents “I wanna be there”, which was hard to accomplish because we were a poor working family, and that would have meant to move to the big city, and taking vocal coaching classes.

SR. Growing up who where your musical idols?

NL. My first idol was of course Michael Jackson. But the one that really inspired me into performing was Whitney Houston, when I heard her singing “I will always love you”, I was like “Oh My God!, I need to learn how to sing like her”, at that time I was in fifth grade, and started practicing how to sing like Whitney Houston, and that’s how I found out that I can sing with a big soulful voice.

Also I’d like to open up a little bit more about how much Janis Joplin means to me, because she has always been like a guardian angel to me, because when I first started singing her songs I found that “rasp” in my voice, and also thanks to that I actually was found by the guys on Youtube and joined this band, so I’ll be always grateful to her. SR. How “Bringer Of Pain” stands out from previous releases? What makes this album different and so powerful?

NL. It’s the first album made by the whole band. Anton who sadly left the band used to write most of the songs before. Now, Janne our keyboard player acts more like a producer, but allowing us all to be part of the song writing. Obviously, there are decisions that are not made by all of us, as you need boundaries. I strongly believe this is the right direction

SR. This is also the first time you guys are working with guitarist Joona Björkroth

NL. Yes, that’s correct. It has been great, but weird because it feels like if he has been on the band forever, because Joona is the little brother of Janne, so technically he has been always with us somehow, so when I asked him to join us he was kind of surprised, because he couldn’t believe that we were parting ways with Anton.

He has been really inspiring, he gets super excited when he has an idea and shares it with us with such a level of passion that inspires us all, also he support my ideas as well, so the chemistry between us is fantastic.

SR. What would you say is your favourite song of the new album?

NL. It changes, depends on the mood. However, lately it has been “Beyond Burning Skies” because is softer, a bit trash, full of hope, and it’s not with not our typical rusty sound. It made me happy that I can sound good without being rough.

SR. I love “Familiar Hell”, and the clip is fantastic. What can you tell me about the making of it.

NL. “Familiar Hell” is about being afraid of change. It’s when you are stuck in place, and you get brainwashed. It’s a way to criticize the media because you can be manipulated by the media about the way you think every day.

Mostly, it’s about being afraid of change, it’s like if you are in a bad relationship and you remain there, that’s a type of familiar hell.

SR. Any updates on your side project NOEX

NL. Not yet, as the calendar of the tour for this year is getting full because of the new album. But I’ve it there waiting on my share room, so I can come back to it whatever I’ve the chance. It still gonna be active and I hope at some point I’ll be able dedicate time to it.

SR. Can your share with us any funny tour story? This happened maybe 3 years ago I think, and was the last day of the tour. I don’t drink at all while on tour to save my voice. But the last evening of that tour after the show I decided to have some drinks and it got out of my hands.

Then, I remember bits and pieces of this, but the guys said later on that I almost got arrested, because, I don’t know about you guys, but for women is hard to pee anywhere. So I had to go, and I was so drunk, and really had to go and we were in the middle of the city, so apparently it was not many people around, so I went there and I didn’t see a police car near me, cos they just stop on the red light and they saw me peeing almost next to them.

We were in Germany, so they were yelling in German and we could not understand a single word. They came out of the car to arrest me, but my dear band members saved me, talking our way out of the situation. They told me I was only saying “I’m sorry I didn’t know I was not allowed to pee in the middle of the city” (Laughs).

Anyway, I just want to be clear that despite that story, I’m normally very well-behaved and don’t really drink much. That was like a one off.

SR. Just to start wrapping up. What would you say has been your favourite gig ever?

NL. I needs to be Japan’s Loud Park a couple of years ago, because our show was 10.30 morning, and we never expected many people to show up. However, it was almost full that early for us.
It was curious, because everyone was so polite and quite, so we couldn’t hear a thing before the show, so we didn’t know what to expect, but when the intro started, they started yelling and go crazy.

SR. Just to finish. When are you guys coming to Australia?

NL. We are dying to go there, but sadly we don’t have any dates yet. We definitely wanna go there, and we hope our booking agent arrange something soon.
I can’t say it will happen this year, but next year I hope to be there.