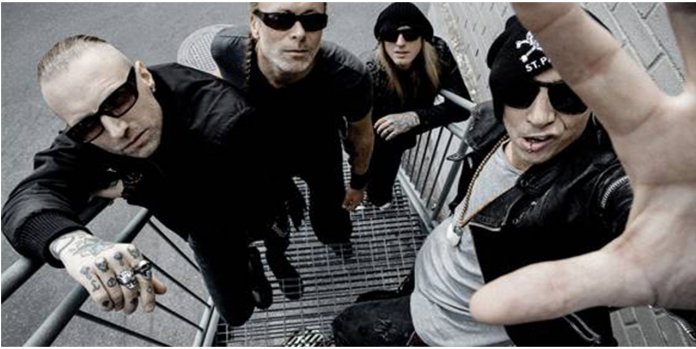 All four original members of Backyard Babies have stuck together creating rock music, touring the world and raising hell for the last 30 years Their latest release Silver and Gold makes the mark that this band will not be going anywhere, anytime soon.

For the first time in over a decade Backyard Babies will be returning to Australia to celebrate their 30th anniversary and thanks to John Howarth from Silverback Touring, we got the chance to chat to singer and rhythm guitarist Nicke Borg ahead of the tour!

SR: Backyard Babies have been together for 30 years now, what’s changed the most for you guys?

It’s interesting because it is basically just two ways of looking at it like a lot of things have changed, in the band and on a personal level even more. But then again, nothing has changed.

So it’s like… this might sound weird. It’s so hard to explain that I don’t even know myself what i’m talking about sometimes. I think about what is the magic behind this. Why were these four guys are still together? We’re obviously not doing it for the money because you know [laughs]

What has not changed is that we have driving force to want to you know, reach out to more people, we want to be successful, we want to write these songs.

On the other hand, a lot of other things on a personal level have changed. We started as teenagers and now, well I wouldn’t say grown up men. [laughs] And we have families and other businesses and careers going on in our lives.

SR:Talking about how without the band like you wouldn’t be who you are at the moment and I think about that a lot. Like if I never discovered like Nirvana I wouldn’t be the person that I am today. Did you have a band like that growing up?

Yeah, definitely. I mean,I will say Guns n Roses in many ways but I would say that kind of music in general I have a few people that I look up to that are much deeper level. Let’s say like Nikki Sixx from Motley Crue. Motley was one of the band’s first bands to me that made me like, wow!

It was everything that I want to rebel against my parents, school, society – fuck off! . Nikki Sixx was like the most bad ass guy. But then something really cool happened, he became clean and sober and started his other journey and started being entrepreneur of radio, other businesses and things like that. And it’s that what super inspired me as you know, I was going on the same journey. I was way, way way way too far in with drugs and drinking and doing all that stuff and I needed to quit all that. So it’s kind of interesting.Those bands and people that have inspired me to become clean and get my fucking shit together and continue to do music.

So bands like Motley Crue, and Guns n Roses but also a very important person would be Mike Ness from the band Social Distortion because he also did the same thing and he actually did it healthily on the personal level to become clean and that’s pretty cool too.

It’s awesome that bands can inspire or save your life or your personality.

SR: Your latest album Silver and Gold was released earlier this year . You’re bringing the tour to Australia and it’s the first time that you’ve been here in over a decade. How excited are you guys to be coming back?

I’m excited but it doesn’t feel like it’s happening! I don’t think that i think i’m going there until I’m on the plane!  Because we are doing Japan the first couple of days and then we are flying from Japan to Australia. I mean, we were there… God, I don’t even know how long it’s been but it was a really long time ago. But it was amazing being there and I don’t know why we haven’t got back there… we haven’t really got a good offer and it’s not exactly around the corner, many various reasons. And now we just had this promoter give us a really good opportunity. We were like “F**ck Yeah! Wow!” We also had the Japan dates there so it was good timing. I think it’s also one of the last things that we will do on this record for a while. We will probably take a break for the rest of the year and also for 2020 for a while so we will see what happens.

All in all we are super excited and we have never been to Brisbane! So we are doing like Sydney, Melbourne, and Brisbane, so one city we haven’t been to before and that’s awesome.

SR: Is there anything that you’d like to do while you’re here?

I am bringing my fiance and i would like to do as much tourist stuff as we possibly can. But then you never really have the time to do that. She’s also coming with me to Japan and we have a jam packed schedule to do everything we can do. But we want to see everything we can in Sydney and Melbourne.

Also it’s been so long, the last time I was there I was on a lot of drugs and drinking a lot, so my memories were a bit blurred from last time so it will be nice to see the classic stuff properly. [laughs]

SR: How have you found the response from Silver and Gold? Are you happy with the reviews?

Yeah we are happy with reviews but I don’t want to sound negative or anything but in general, the music industry today is really hard for bands… you have all the arena bands like Metallica. I love that stuff, all the arena shows are better and cooler than they ever have been, but for the bands that are on a smaller level- the clubs are closing down, it’s working against arts and culture. It’s really hard to put music out on all these streaming services that are just focusing on these giants bands and giant artist you know? Then special media is just one f**king blur and it’s just frustrating just to be seen. Record companies need to work better with the band and how to reach more people. I have fans who message me asking me serious questions like “hey, are you guys still around? Have you released something new lately?” and i’m like…Yeah? And they don’t even know!

The thing is there is just so much stuff going on, it was easier before when you’d go to a record store. I’m happy with the ones who have reviewed the album and who come to our shows but I’d just like more people to know about it.

SR: You were saying just before as well that like Guns N Roses are a big influence to you and you guys have toured with them a long with many other major bands. Is there anyone that you would really love to tour with that you haven’t yet?

No I don’t think so, because the thing with touring with all those big bands like Guns N Roses and like that- you get this amazing opportunity to play in front of a lot of people and also you get to be close and share the stage with your favourite bands and that’s like amazing in itself. But the best is to go on tour with bands that are more on your level something more like a co-headline tour.

SR: If there was any song in the world you wish you’d written, what would it be?

There are so many, I love so much classic rock and I love the 90’s. I wish that I wrote Estranged by Guns N Roses.

SR:You guys have done you know all your hard yards and everything like that within your career. What’s the best advice that you could give me as an aspiring musician?

Get an education! [laughs] it’s always good to have an education behind you. I dropped out of school I take the chance because I thought it was cool but you look back now [laughs].

It all comes down to the songs. I mean, a good song is a good song. So keep on writing songs, keep on writing more songs that you would ever think you will need and let people hear them. And other people play them. Just write songs and sing them from your heart. It’s really important and a lot of artists are forgetting that these days.

Catch Backyard Babies on tour this October! On Sale Now!

Tickets avaliable from : From: https://silverbacktouring.com.au/