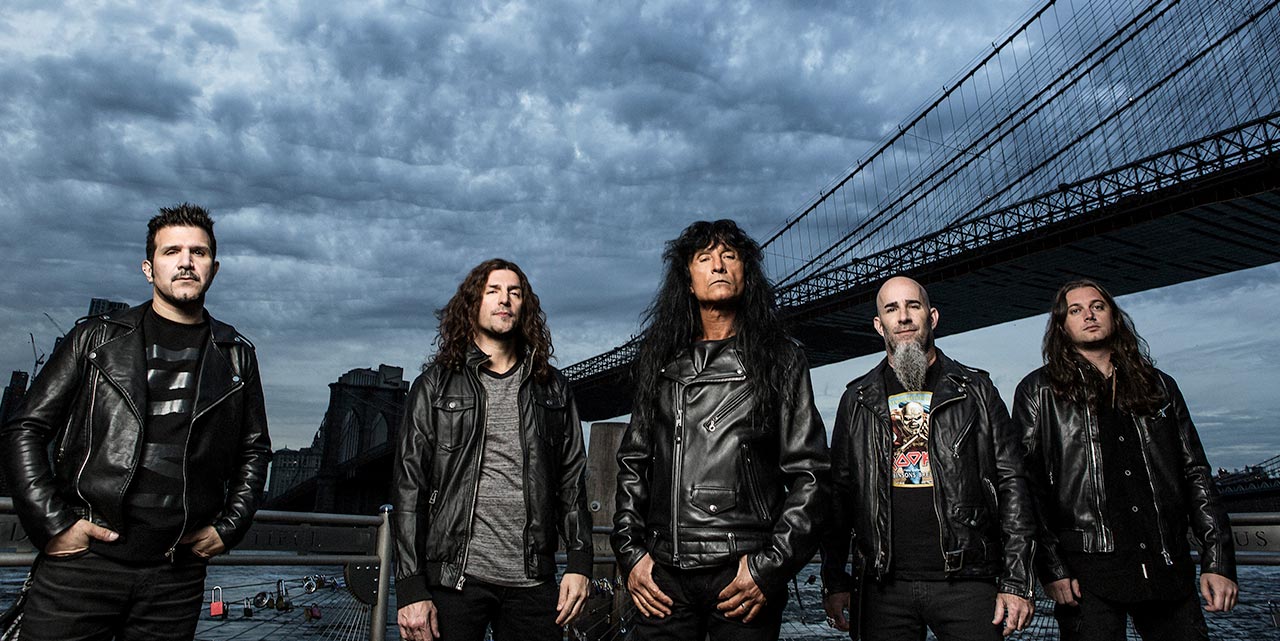 We had the chance to catch up with Frank Bello, Bass guitarist of American Heavy Metal band Anthrax. We chatted about their upcoming trip to Australia for Download Festival, their songwriting inspiration, and their plans for a new record.

SR. Anthrax are gonna be playing at Download Festival in Australia this summer, how are you feeling about that?

I just got the news myself recently, that we’re finally coming down to Australia, and we couldn’t be more excited! We’re about to have a long, cold winter over this side of the world coming up, so I’m looking forward to getting over there in the summer and having an awesome time. We’ve been touring so much, it’s great, the record came out three years ago, and it’s still the same tour that we did for the record, so we’re very excited for what’s coming up for Anthrax. We really couldn’t be more excited to come to Australia, we’re in a great place right now, and we want to come over finally and show you what we’ve got.

SR. All that touring must be exhausting!

Yeah man, these tours we’ve been on have been incredible though. There’s a whole new generation that came out and became anthrax fans, along with our original fan base, which we love. There’s been a turnaround because people have been able to see us touring heaps, we’ve had such good momentum. We were going to be writing a new album this year, but then the Slayer tour came up, and we couldn’t say no. They’re good mates of ours, and the tour has gone so well. Metal is alive and well, and we’re heading to Europe very soon, and from what I hear, metal is alive and well over there too. These are really well planned shows that we’re playing, we’re very psyched right now. SR. When do you think you’ll start doing your new record?

We finish the Slayer tour in mid-December. We started touring nearly three years ago, and it’s been constant since then. When we finish this Slayer tour, we’ve got some dates that we’re going to meet up in January and start thinking about this next record. Well get together and start bouncing around some ideas, and get things in motion for the next record.

SR. You play bass in the band, have you got many riffs up your sleeve for a new record?

Yeah, it’s been a while, so I’m sure all of us have a bunch of ideas floating around for new material. I play more guitar at home than bass, when I write, I write on guitar. Everybody records everything we have, so by January, we’re gonna have a fair few songs and riffs in the works.

SR. I know you’ve used a lot of ESP guitars in the past, are you still using them?

Absolutely. Now that I’m hearing about Download Festival, I was going to ask ESP, who I’m endorsed by, if I could do a bass clinic while I’m there. It would be a lot of fun, and I don’t think I’ve ever done one in Australia.

SR. That would be awesome. I think a lot of people would be interested in that. Do you exclusively use ESP guitars?

Yeah, I actually have three signature model guitars with them. I have an eight string bass signature with them as well. A lot of people like them, I really recommend it, and it’s a great bass. I wouldn’t put my name on anything that I don’t believe in, I could never sell something to a musician that wouldn’t work for them. We took a long time to fine tune it, and It payed off, so many people love it, along with a lot of producers, which I’m really happy about.

SR. You started out as a roadie for the band initially, did you ever think you’d end up being in the band?

Well, even when I was a roadie I was playing with the band, but my main job was changing guitar strings to be honest. Even before the first record I was a guitar tech, I joined the band when the first record came out. I had been helping them out for a while, but I always wanted to be a part of the band. I was going to start auditioning for other bands, but then they started auditioning for Anthrax, so it all worked out nicely.

SR. You guys are a pretty full on metal band, but you did a bit of a rap/rock fusion with Public Enemy, will you ever be doing anything like that again?

Everybody has pretty busy schedules, but we played LA a while back, we closed the house of blues in LA, and Chuck D came out and play ‘Bring The Noise’ with us. It was incredible, the vibes never left. We’ll be friends forever, I’d love to work with them again.

SR. How did that collaboration with Public Enemy initially happen?

It all happened after Scott from public enemy shared the stage with us one time, and then Chuck suggested we do a song. It all worked out really well, we sent a song to them and they loved it, so we made it happen.

SR. If you could collaborate with any artist on your new record, who would it be?

People want to see us collaborate with other metal artists, I would prefer something obscure. I’m a die-hard Beatles fan, so if Paul McCartney wanted to do something with us, I would Love it. I think it would be amazing. I would also like to work with Dave Grohl, I think he’s a fantastic songwriter and producer.

You can catch Anthrax, alongside acts like Slayer and Ozzy Osbourne, at Download Festival this summer. This is going to a ripper of a festival, so grab your tickets now, before they sell out! Also catch Anthrax with Slayer and Behemoth at sideshows in Brisbane and Adelaide!