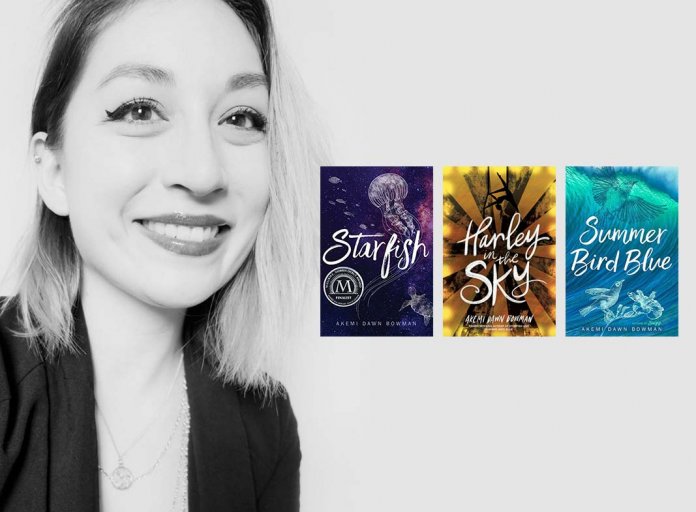 Akemi Dawn Bowman is the author of award-winning Young Adult fiction books Starfish and Summer Bird Blue, both of which deal with teenage life, loss, mental health struggles and the experience of a biracial upbringing. Her latest release, Harley in the Sky, released 10th March 2020, deals with similar issues set against a glittery, circus-filled backdrop. Her beautiful writing, the poignant themes and the relatable characters have all combined to make Akemi one of the best voices for teenagers today. American-born, she currently lives in Scotland with her husband and two children.

Spotlight Report sat down with Akemi to talk about her latest release and upcoming projects. Check out the interview below!

SR: Your latest book Harley in the Sky is officially out now! Congratulations! What’s the response been like so far?

ADB: Thank you so much! Everyone has been so kind and generous with sharing their thoughts about Harley and her circus friends, especially during such a difficult, strange time in the world. It hasn’t exactly been an ideal time to have a book release, with countries going into lockdown, bookstores and libraries closing down, and so many people getting sick. If I’m being honest, it’s been so hard to process all of this that I’ve sort of cut myself off from even worrying about the book, because there are so many more important things going on right now. That being said, hearing from readers and finding out in whatever small way that Harley is still reaching people feels huge. It’s brought my heart a lot of much needed joy, and I’m very grateful for the positive response!

SR: For anyone who is yet to read Harley, what do they most need to know about the book?

ADB: It’s about a girl who dreams of being a trapeze artist against her parents’ wishes, and decides to run away with a rival circus. My wonderful publishing team has been calling it THE GREATEST SHOWMAN meets THIS IS US, which feels really perfect because it combines the magic of the circus with real, messy people who are just trying their best.

SR: Your books are so beautifully written! You capture life so perfectly! One of the things you deal with in your books is mental health struggles. Is this something that you feel compelled to write about? 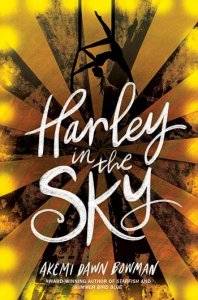 ADB: Ahh thank you! That means the world. To be honest, I never set out “intending” to write about mental health—it just comes very naturally to me as I flesh out characters, probably because I’ve had mental health struggles all my life. It’s my normal. So many of my characters have little pieces of me in them, and I suppose I hope writing about their struggles in an honest way will allow other people to see that they’re not alone—that someone else out in the world gets what they’re feeling, and what they’re going through. A book isn’t going to cure someone of mental illness, but it can definitely help them feel seen. And for me, that’s always been a really helpful way to cope.

SR: One of the things I love about your portrayal of mental illness in Harley in the Sky is that you never name what Harley is struggling with, although it is very much hinted at. I really love that she isn’t officially diagnosed and is dealing with it her own way. It really shows that there is a spectrum and that some people can live mostly normal lives despite having a mental illness. Was this something you wanted to convey right from the start of writing Harley’s story?  And what prompted your decision to not label her?

ADB: It was definitely a conscious decision not to use labels. Similar to Harley, I feel like it’s much more important to prioritize what someone is FEELING, rather than what label they’ve been given. Because the fact is, so many people in the world are undiagnosed but still finding ways to cope and manage their mental health. Therapy is a privilege not everyone can afford, or have access to. And although it can be wonderful and life-saving for some, it’s not necessarily right for everyone. I think too often people use therapy and medication as a way to validate an illness, when really the whole purpose of labels is for an individual’s doctor to help them come up with a treatment plan, and for the individual to understand what they’re going through. It’s not for someone on the outside to force you into a box, or tell you that you’re somehow “failing” if you didn’t go to therapy. Because many of us have been coping in our own ways for a long time, and what works for one person may not work for everyone. I wanted this story to validate the people who perhaps feel pushed out of conversations about mental health due to being undiagnosed.

SR: The way you choose to write about mental health struggles really normalises them for your readers. Was this a conscious decision or is it just the natural progression of your stories?

ADB: I’m really glad to hear that. I think I’m always so harsh and critical of myself, that I try to create characters who exist in spaces that allow them to just be themselves. I want them to feel normal, and to have compassion for themselves, and to find kindness even when they make mistakes. Because I think people who are trying their best deserve that. And I think the more stories I write, the more perspectives I get to show. Maybe that lets people see that there isn’t a single right way to exist—that we’re all different, and that’s okay.

SR: How did the idea for Harley come to you? And when did you decide to set it in the circus? Was this something you had in mind early on? 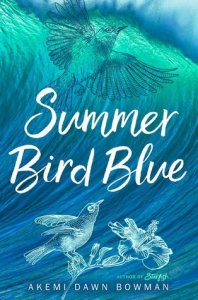 ADB: After STARFISH and SUMMER BIRD BLUE, which dealt heavily with abuse and grief, I wanted to write something a little lighter. HARLEY IN THE SKY is a combination of romance and magic but grounded in the real world, and I think it’s something my heart really needed at the time. And I’ve loved the circus since I was a kid, so it was the perfect match for me!

SR: And when did you first want to be a writer? What was it that sparked your interest in writing?

ADB: From the moment I realized I could make up stories, to be honest. Writing for me has always been a form of escape, but also a form of therapy. It illuminates my heart in all the best ways.

SR: And what books/authors have inspired your writing over the years?

ADB: I’ve always loved Philip Pullman’s HIS DARK MATERIALS, as it was one of the first books that made me realize the power of a story to pull you into another world and keep you there. But more recently, I’ve loved THE PRIORY OF THE ORANGE TREE by Samantha Shannon, UPROOTED by Naomi Novik, and AN ECHANTMENT OF RAVENS by Margaret Rogerson. I’m definitely drawn to fantasy and lyrical world-building! Also, PRIDE AND PREJUDICE by Jane Austen and ANNE OF GREEN GABLES by L.M. Montgomery have probably forever impacted the core of almost every love story I will ever write.

SR: Did you ever imagine that your books would be distributed around the world? Can you believe that they’re all the way over here in Australia!? 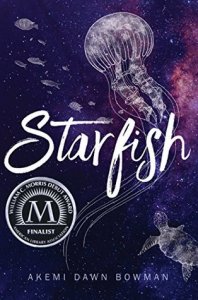 ADB: I mean, I definitely dreamed about it, but I never in a million years thought it would actually happen. It still feels wonderfully surreal, and I’m literally grateful for every single reader who picks up one of my books. Every time someone shares a kind word or a photo, it feels like I’m seeing my book out in the world for the first time. It’s one of the coolest feelings ever!

SR: And finally, can you give us any hints about what your next project will look like?

ADB: I’d love to! I just finished up edits on my sci-fi debut, THE INFINITY COURTS. It’s a big change from my contemporaries, but I’ve loved SFF for as long as I can remember, and it’s what made me start writing in the first place. So, for me, it feels like getting back to my roots. It’s about a teen who tragically dies and finds herself in an afterlife called Infinity. She quickly discovers it’s been taken over by an artificial intelligence posing as a queen, and has to join forces with the surviving humans to try and stop her. I’ve been calling it the sci-fi/fantasy mash-up of my heart, but it was mostly inspired by my love of both superpowers and period dramas, and wanting to combine the two. I’m VERY excited for readers to meet Nami, and to learn about this strange new world! (Also, I’ve seen the cover already and it is GORGEOUS.)

Connect with Akemi on social media: