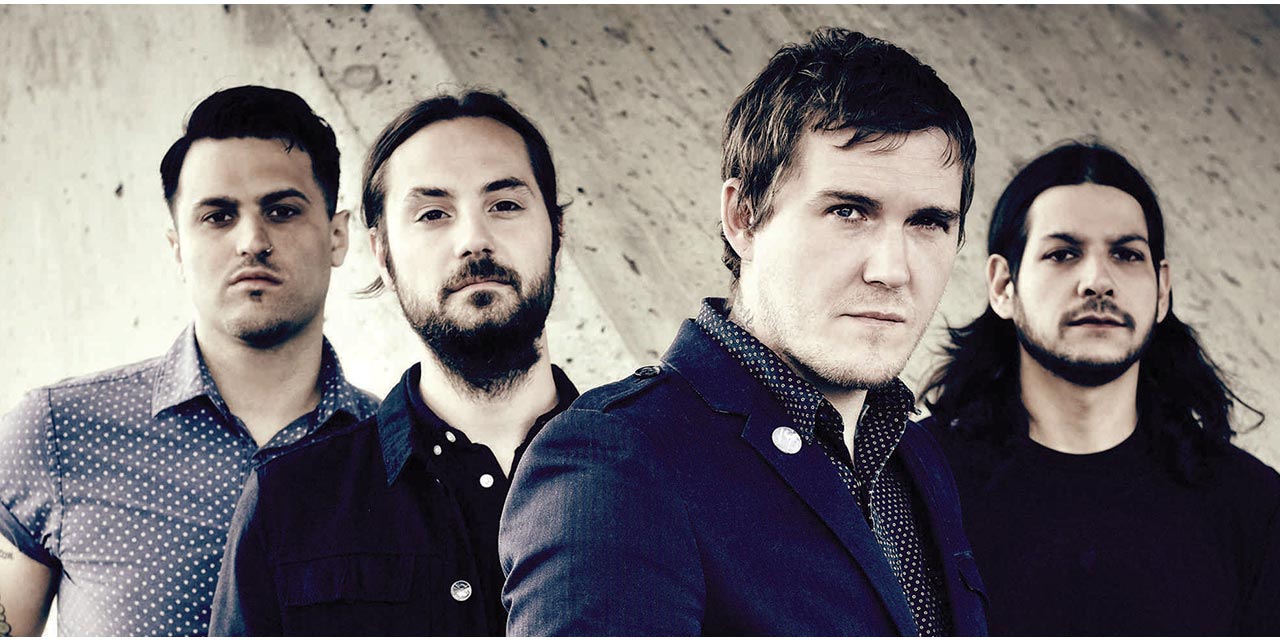 With 2014’s release of Get Hurt, The Gaslight Anthem have had a busy year touring this release and are now continuing their adventure with it on Australian soil. What makes this band so unique is the fact that they have kept the legacy of rock n’ roll alive and have connected with thousands of people around the world with their music. Garnering influences from Bruce Springsteen and The Clash, Alex Levine, the bass player of the band, gives the latest scope on what the band have been up to and gives an insight to what its like to see them live.

So last year the band released, Get Hurt. The record received a lot of mixed responses by critics and fans. In all honesty, how does this make you feel? You know, I don’t really look into that kind of stuff as much. You take the good with the bad and you gotta keep moving on with it. At the end of the day, people are talking about it. It’s a good thing, I think.

I know Brian was going through a lot at the time of its release. Do you often feel it’s a challenge for musicians to let themselves creatively make music, especially when it comes to an aspect of their personal life wearing them down?

Yeah, I mean I think that sometimes it helps with the creative process. I think it depends on the situation but the beauty of music is that it could be your outlet for a lot of things, you know.

Otherwise, it’s great to see the band have such a strong fanbase. What can you appreciate the most about the fans?

We have the opportunity to play music and you know, that’s something you should never take lightly. A lot of people would kill to be in this position that we’re in. We take our job seriously and we take our music very seriously. You gotta do that, you know.

Yeah, cause I attended your 2013 show, around 2 years ago and it’s amazing to see so many dedicated fans. I feel like a lot of fans follow your albums religiously.

Yeah, I mean it’s amazing. Some of the fans are just unbelievable. It’s really a great thing that we have.

I don’t know if you’ve noticed this but in the show, I noticed that there were more males than females. Do you get that a lot in shows or do you get a mixture of both genders?

I don’t know. I think it definitely depends on where we are and kind of what’s going on. It’s usually a mix all the time so it’s hard to kind of gauge.

Fair enough, haha. So it’s kind of interesting that the band’s music was mainly influenced by Bruce Springsteen. Does the band often strive to continue on the rock n’ roll legacy?

So what other musical influences have shaped the sound of the band?

A lot. For me, the influences are The Cure and The Clash and just a lot of punk rock as well as a lot of older classic rock. I think it changes from album to album but you know, we try to keep our influences on our sleeve.

Ah great. So even though the band does come across as loud and ambitious, would you say you guys are a poetic band in terms of the visionary lyrics you create with your songs?

Ah, sure. I think there’s definitely a poetic side to our lyrics and to our band in general.

So how do you guys approach songwriting? It’s obviously a collaborative effort, right?

Yeah. Every song is a little different but you know, we change it up from time to time. It’s a different process for each track.

Do you mainly write from personal experiences or does it depend on the mood?

I think it changes from time to time or from song to song, you know. Every song is its own animal and song entity and you take it as you go.

So the last time the band was in Australia was 2013. When it comes to the intimate shows, what do you enjoy the most: the crowd or the atmosphere of the venue?

The crowd, of course. If it weren’t for the crowd, you wouldn’t have the show.

When it comes to the crowd, what feeling do you get when you see them from the stage?

We feed off their energy. If they’re into it, we’re into it, you know. When they’re not into it, it’s harder for us to not be into it.

So how would you describe the band’s energy onstage then? Would you say that you guys are more mellow or more rock n’ roll?

I just consider it as a rock n’ roll band. I think we’re pretty energetic and that’s kinda the way we see ourselves in our shows.

Excellent. So would you say rock n’ roll is your favourite era in terms of music genres?

Oh yeah, without a doubt.

Nice. So your upcoming Australian tour starts really soon and I think it’s incredibly generous that the band have offered fans the chance to pick the setlist. How did this decision come about?

We just kind of wanted to change and keep things fresh. I think that was kinda the idea that we came up with.

With the setlist, how do you choose the songs when it comes to the live shows?

It changes from day to day. We really don’t have a set setlist. We really just kind of go for it.

Do you guys have a particular album that you like playing live?

Well, right now, Get Hurt because it’s the newest one but I really like American Slang as well.

What does American Slang mean to you guys?

I can’t really speak for the other guys but for me, every record means a lot. It’s a great thing to continue to make records and every record that you make, you shouldn’t take lightly, so with every record, we make it special.

So in a few years some of the band’s records are going to turn 10. I know some bands are doing anniversary tours. Will this be in the cards for The Gaslight Anthem?

Maybe. We’ve talked about it. We just have to see, we might do some 10 year event. If it works into our plans then yeah, if not, then it doesn’t.