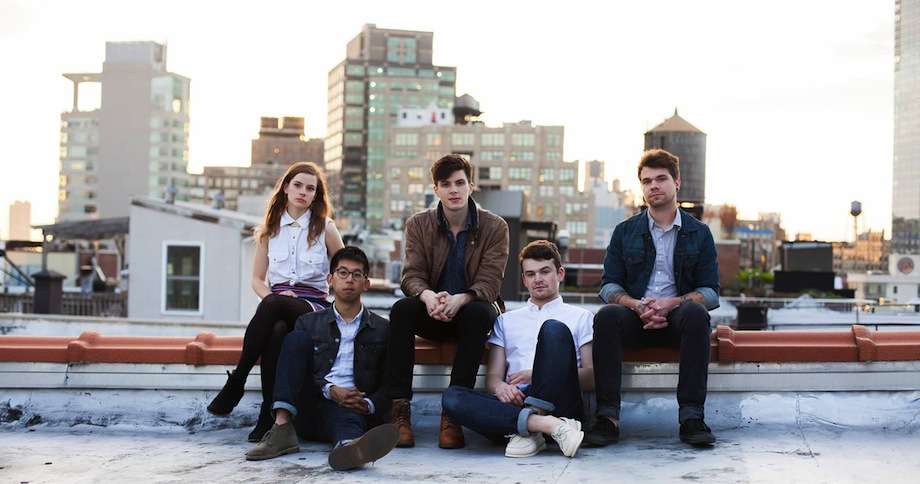 New England-based Magic Man was started by childhood friends Alex Caplow (vocals) and Sam Vanderhoop Lee (guitars and keyboards) while they traveled abroad trading labour for room and board on a series of French organic farms, creating the music for what would become Magic Man during their travels.

We spoke to Alex about what it was like to make their new record ‘Before The Waves‘, which as it turns out is actually only new in Australia. We also discussed his love for different cities and finding inspiration in the unexpected.

I just wanted to say I have been listening to the record and I love it so much, so congrats on its release here!

Thanks so much I am glad you like it.

It must be pretty weird though because it came out in the US in May 2014, what’s with the delay?

Well, I have no idea. I was really hoping you’d know. (laughs)

I have no idea, it is a great mystery but I guess when you are in the world with major record labels, there is a lot of logistics there and politics or something that ends up taking a long time to release records internationally. It is very strange for such delays but hopefully the music still stands up a year later.

Yeah right, well luckily it does. But I mean in hindsight now that the album has sunk in with you guys, if you could; would you change anything about it? You know it’s hard to say. I’m very proud of it and I think it’s pretty much doing exactly what we had set out to do and it was recorded so long ago at this point that I have learnt so much as a singer. My experience from touring and playing shows every night and just learning vocal techniques makes me feel like I am a much stronger singer now than I was recording the album. So personally, sometimes I listen to the songs on the album and I’m like ‘Oh, I could do such a better performance if I could record it now’. We have adapted a lot of the songs for our live performance which is basically just the five of us and a lot of different layers on the record that sometimes I hear live recordings and I think ‘Oh, well there is something pretty special and raw on the stripped down simplified version of the song’. So there are a lot of different ideas going through my head of things I want to try for this next record.

So when it comes to the songwriting process of this album – do you have a formula or is it just a random ideas?

Well Sam and I do all the songwriting and it’s always a total collaboration between the two of us and sometimes I come up with the first idea and sometimes he does. It sometimes be just a melody in my head or a chord progression, or a drum beat. They start up pretty basic but end up going back and forth, back and forth between the two of us and we edit each other and introduce different ideas and build them up until we are both very excited about them. So it’s a long road and process. We start off with dozens and hundreds of ideas and than we have to cut them down to the best stuff, which is always tough. Particularly those final cuts that have gotten pretty far along and we still have to cut them off the album but it is always worth it.

Speaking of tracklists a lot of tracklists have a tonne of cities on it – Paris, South Dokata, Texas, Chicagoland – what’s the idea behind that?

Well we found that we love to travel and we are lucky that traveling has become part of our everyday lives and we becoming very inspired by visiting new cities and having very distinct memories in certain cities. The songs are basically what those places mean to us. In the same way that it is easy to project emotion onto a person or a relationship and be inspired by that for a song. We try writing songs about cities. Also I listened to a record that I loved in high school that wrote about the 50 states and I thought it was a real cool idea to write songs about places so we tried to write some ourselves.

It’s interesting that you mention finding inspirations through records, because didn’t Sam discover the sample at the beginning of ‘Texas’ while digging through record. Do you guys often find inspiring things in unexpected places/times?

Oh definitely, I mean we are all little collectors and we try to listen to as much different music as possible and collecting influences and literal things like I love collecting little knick knacks and antiques and going to thrift stores and searching through a sea of undesirable things and finding those little gems that are hidden in there. I love the hunt as a search (laughs). So that record that we had discovered in the thrift store was like a self-help dedication record from the 50s or something. We felt the voice was so interesting and it started off that way and we thought ‘How cool would it be if we started the first song on the record with a sample from this old thing that we just found’ and it ended up working out for us.

Yeah, it is a really cool thing to have on your album.

Yeah and when I was in Paris I started a project where I recorded a minute of sound everyday in different places and posted it to a tumblr so I have always enjoyed trying to capture little samples and try to later incorporate them into music.

So iTunes has labeled your music as alternative, indie rock, rock and pop – and I mean your album is genre blending in the best way possible. How would you best describe your sound?

Labelling is always difficult for us artist because you always kind of want to think that you are somewhere between different genre. I remember when we first had to come up with a name for what genre our music was, we decided to call it triumphant synth rock because we thought it wanted to play rock music that was triumphant but other people are like that is straight up pop music and other people hear it and say well that is indie music. So everyone has their own interpretation. So we are happy and honored to be listed next to any of the those genres whether it be pop, rock or indie bands on iTunes. You can call us whatever you want.

Well it’s interesting because even when you go on tour, you have gone on tour with a whole bunch of different artists like Panic at the Disco. What did you learn from them that you could carry on to your own live shows? You know we learn so much every night watching them on stage, everything from their showmanship to their dance moves and to the tightness of their band. As well as little tips like what to put on your rider and how to survive the grueling tour lifestyle. So we have picked up so many good tips from these artists like the Walk The Moon guys and we hope to be able to pass them down as we continue to tour and have support acts ourselves.

That’s awesome! So we took a couple of fan questions for you! The first was – if you wrote a song called ‘Sydney’ what do you reckon it would sound like?

That’s a very interesting question. I’d probably try to go to Sydney first and than write the song based on my experience but without going there I think it would be an upbeat song. When I think of Sydney I get very positive vibe and I see sunshine in my brain and I don’t know if it’s sunny there all the time but in my head it is. So I think it would be a summery feel good jam with a bit of edge to it.

These next two questions are from a fan named Helen. What is their favourite song to play on tour?

I love all of them, they are all sort of our babies and they are all very special to us and I try to perform every song as though it is my favourite song in the world. I try to get very into it while we are playing but I have to say ‘It All Starts Here’ which is the last song on the album and its sort of this slow long building song and it gets me very worked up and emotional and has very big cathartic release to it.

When are you guys coming to Australia and will they be playing any shows while they’re here?

Well as soon as we possible can. We just toured with this great Australian band named Tigertown and we also played with The Griswolds, who we are big fans of. So hopefully we could do a tour with one of those bands or as soon as possible make our way over there.