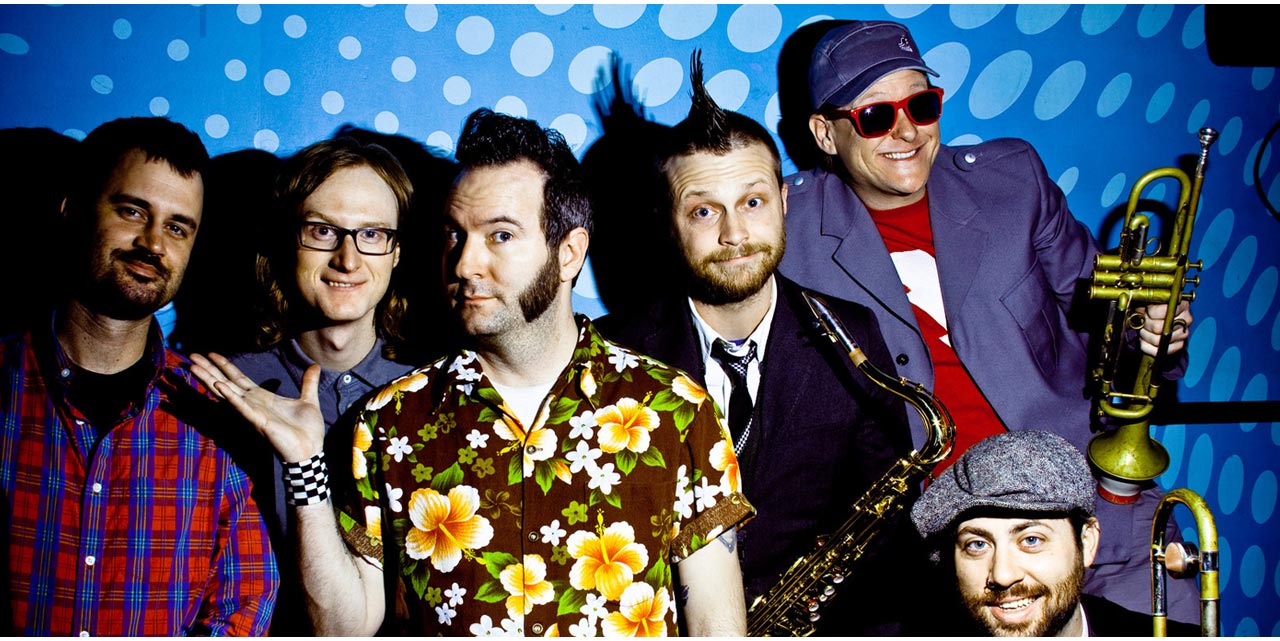 The beloved Reel Big Fish will be hitting our shores in October to play a series of dates that are sure to see punters turning out in their droves for a whole lot of high-energy ska punk goodness. First hitting the spotlight during the ‘third wave’ of ska with their albums, Everything Sucks and Turn the Radio Off, the band has had a string of hits since, including Sell Out, Beer, Cheer Up, She’s Famous Now, and their cover of A-Ha’s Take on Me. Their last full-length album was 2012’s catchy Candy Coated Fury and last year, the guys released a holiday-themed EP entitled Happy Skalidays. Today we spoke to the band’s affable singer and lead guitarist, Aaron Barrett, about his lyrics, the band’s personnel changes, touring, his fondness for Hawaiian shirts, and his favourite guitar!

SR: Hi Aaron, thanks for talking with us today.

AB: No problem. My pleasure.

SR: Congratulations on a great career with nine studio albums since your first hit, Everything Sucks. Have you got another album in the works?

AB: Oh no, there are songs forming in my head right now, but nothing in the works to actually start recording yet. Maybe next year we’ll start working on something.

SR: Oh, that would be great. What inspires your lyric writing? You seem to have a lot of fun with mixing humour and a bit of banter with some tongue-in-cheek into your songs.

AB: Yeah, I guess I’m just good at being sarcastic.

AB: I’m good at joking around about the more negative side of life. I write songs about heartbreak and being angry in a funny way that kind of makes people laugh about their problems. It helps me laugh about my problems. (Laughs)

AB: Well, it sure does, along with the very energetic sort of music. If people don’t listen well enough, they probably think it’s a happy song (laughs)

A lot of people think that, you know… Well, there are a lot of funny songs, or cheerful songs that we do, there are happy songs.

AB: We sneak in some dark subject matter, every now and then.

SR: Oh, you have to, for the real deep thinkers.

SR: Yeah, that’s for sure. What keeps you going, after all these years? I heard that a few years ago, you felt like walking away, which I know inspired We’re Not Happy Till You’re Not Happy. AB: Oh, yeah. At that time, there were a lot of people in the band that were very unhappy with their own lives and kind of making everybody else’s life unhappy, too. It was a rough period. The record label that we were on really wasn’t working out so well, and there were just a lot of problems at the time. Making the album kind of helped get the bad feelings out and get through it, instead of quitting, ‘cause we can’t quit making music. We had to kind of work through it. But I think what really keeps us going is the fans keep coming back to see the shows, you know? We’re always on tour. We love to play music and then people keep coming to see us, so the cycle continues.

SR: That’s great. How do you like your latest line-up? Do you hate them already?

AB: No, I think everybody in the band now is in the band for the right reasons and I think they all appreciate what a special thing it is – what we have going. To be in a band that’s well known and has a lot of fans and has the potential to help people feel better and make their lives better and touching people. So yeah, I think everybody in the band gets along really well now. It took a lot of members, but everybody’s getting along good. A few guys left the band just recently because they had kids. That’s been the reason the last two or three guys have left the band. Not because of hard feelings, like Scott and Dan… Baby number two came along and the wife said, ‘No more touring. You can help me raise the kids.’

AB: You know, it is really hard and being on tour all the time is really hard on people’s relationships. I understand that. But the playing is easy. We sit around, we see the world, drink a bunch of beer, and play music. It’s the best job in the world.

SR: It would be the best job in the world. What would you want to do if you were offered another life?

AB: I don’t know. This is my dream come true. This is what I wanted my life to be so I can’t imagine doing anything else.

SR: Well, it’s great if that’s the way you wanted it and it’s turned out. I was just asking because of the time when you have been unhappy with life, in general, and if you thought, at that time, ‘If I could do this, I wish I did.’

AB: (Laughs) Well, at that time, also, I kind of started a side project called The Forces of Evil. So, even if I wanted to start a new life, it would be doing the same thing.

SR: Well, that’s good. You’re in the right job then.

SR: You’ve done a few appearances with the Aquabats. Who else have you worked with that has been that entertaining?

AB: As entertaining as the Aquabats? Not many bands. Less Than Jake is a very entertaining band, too. They’re fun.

“…we’ve had some stalkers over the years – crazy people…”

SR: Yeah, they said they have a lot of fun with you guys.

AB: Another band that we do a lot of tours with in the U.S and in Europe is called The Bourbon Legend. We’ve been touring with them a lot, they’re really fun. They do kind of ironic boy band dances. They have choreography and stuff.

SR: Well, this is your second major tour with Less Than Jake. Both bands are very boisterous. Do you ever mess around or prank each other?

AB: Uh, we don’t really prank each other so much. We say shout outs to each other. We make little cracks and little jokes about each other onstage, but that’s about it. I hope not. I hope they’re not planning to prank us this time. Maybe they are.

AB: Goldfinger, when we toured with them, they used to prank us a lot. One time they came up on stage and smeared cat food all over us – like wet cat food.

AB: We smelled so bad. And then they sprayed us with fire extinguishers after that. So, they were into that whole Jackass kind of thing.

SR: At least they washed the cat food off. I’d rather the fire extinguisher.

AB: Well, it was like the foam fire extinguisher. It wasn’t even washing us off. It was pretty gross.

SR: Well, what’s your favourite guitar that you currently own?

AB: My favourite guitar. Let me see. I have a really nice Gordon and Smith. It’s a small company from England. I used it on one of our DVDs, and then it got broken and I got a new one. But I think that’s my favourite guitar of all time. It just sounds awesome and feels really good.

SR: Oh, that’s a great plug for them.

AB: Yeah, it’s got a Les Paul kind of body and then the neck is like a really thin, shreddy metal guitar.

SR: Oh great. Who does your album artwork?

AB: Well, it’s been different people every time that have done it.

SR: What about on the last album?

AB: Last one was this guy named Thom Foolery. He has done a lot of work on different cartoons and things on the Cartoon Network.

AB: We met him on a show. He does all these little cute animals holding knives and doing terrible things, so I thought that would be perfect for Candy Coated Fury.

SR: Oh, excellent. Are you still recording and producing other ska bands?

AB: Not so much anymore. I just don’t like telling other people what to do so much. It’s hard, working with bands, because I know how it is working with producers and I don’t like it that much, either. Nobody wants to be told how to change their song or how their song should go. People get so attached to them. I’m not good at forcing people to do that.

SR: Unless it’s your own band?

SR: Do you have any funny fan stories you can share with us?

AB: Oh, wow. I don’t know. (Laughs) We had this one fan this one time that just kept showing up in the weirdest places. Like, somehow she knew people at airlines and she’d have herself sitting between us on the plane. And we’d be in hotels and she’d like pop out of a room. It was a real sort of stalker situation.

SR: I was going to say, that doesn’t sound like a fan. That sounds like a stalker.

AB: Yeah, we’ve had some stalkers over the years – crazy people – ‘cause we’re still nice to everyone.

SR: And you’re a very colourful person. You seem to like to dress well and sometimes your stage costumes are amazing. Do you put the outfits together yourself?

AB: Yes, definitely. (Laughs) I don’t think anybody would actually dress us like that, or let us dress like that. Any kind of wardrobe person would think it was terrible to see us in those clothes.

SR: Do you design them, or do you go op shopping or shopping online? How do you acquire your costumes?

AB: I like the vintage old Hawaiian shirts and the Tiki shirts from the fifties and sixties. Sometimes online…sometimes I go to lots of vintage stores. But I have a huge collection of kind of tacky, brightly coloured Hawaiian shirts. It’s awesome. I’ve probably got a thousand by now.

SR: (Laughs) Well, just quickly – a message for your Australian fans before you hit our shores with Less Than Jake in October?

SR: Well I’ll be there, so I’ll be having a dance with you.

AB: I have a very serious message, of course: Get ready to party.

SR: You’ve got to keep partying. It keeps you young.

SR: Thanks so much for talking with us today, Aaron, It was really good chatting.

*Images for illustration purposes only. No commercial gains. Band photo by Rob Interieden via. Soundwave Touring.