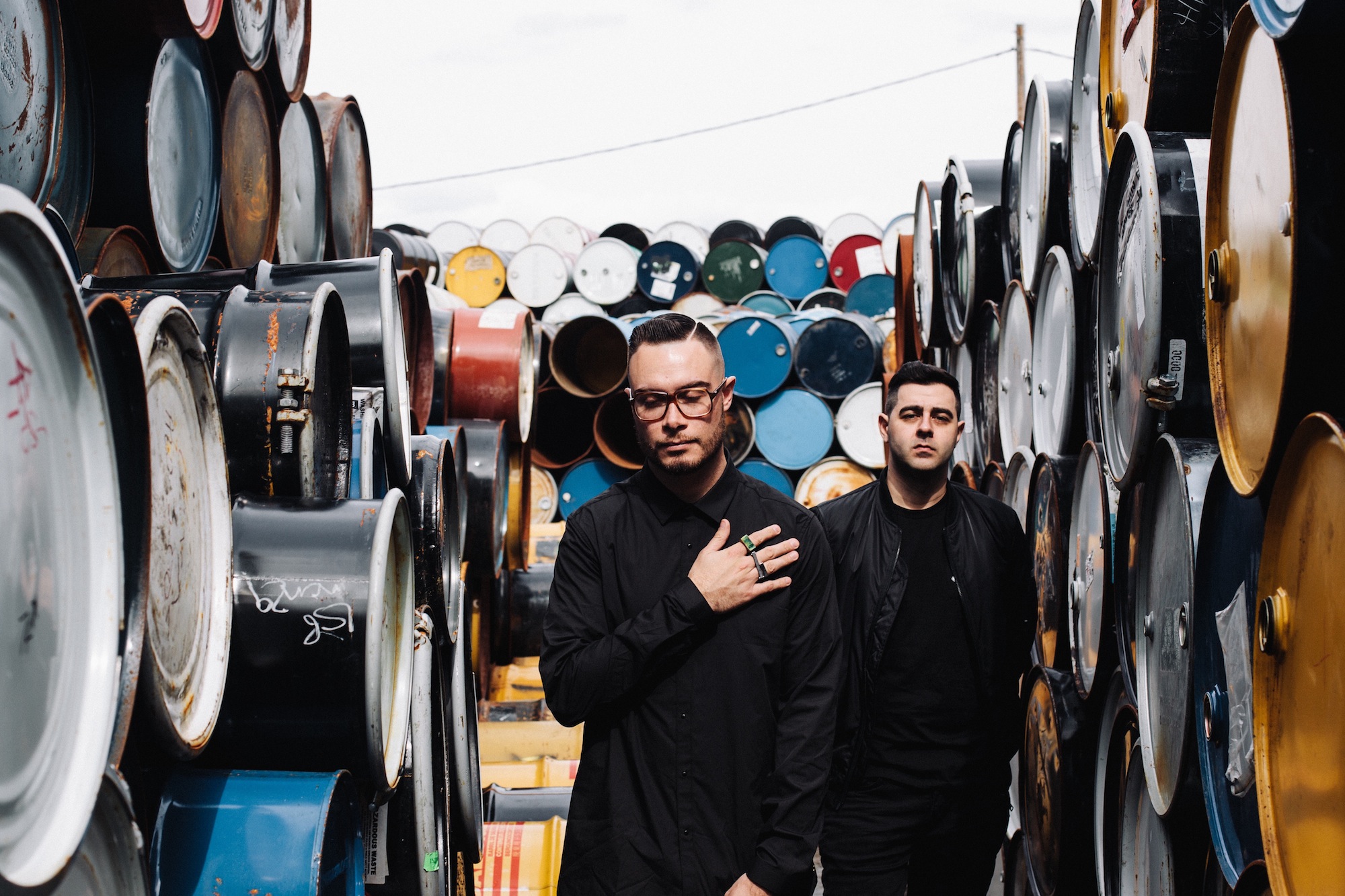 If you don’t know who Koncept & J57, you really should. The New York based singer and producer, respectively, created this musical powerhouse after they met working at a record store in the city. This become a launchpad for a lot of underground rap artist, Koncept & J57 included. The pair have recently released their debut ‘The Fuel‘ EP and they have kindly talked Spotlight Report through each track off the EP, how it came about and what inspired the sound on it.

You can stream the full EP below.

Koncept: Life is fragile. You need to care about what & who you love.  Relationships can be fragile. Your career can be fragile. You need to work hard for what you want, for what you believe in, and put effort into building it and keeping it strong. I had just left my apartment in Brooklyn and was about to move to the west coast. I was staying with my family for the week before flying out when we decided to add this song to the EP. I set up my studio in my parents basement, recorded my vocals, sent J the Pro-tools file and then broke down the studio to pack it up and ship it out the next morning.

J57: Shortly after I recorded Hollis’ vocals for this track, me, her and my assistant, all ate at the amazing chinese food restaurant down the block from my home in Brooklyn.  After Hollis left, I then wrote and recorded my bridge for this track.

Koncept: It’s everything that drives you. The Fuel is what makes you wake up in the morning and gives you the energy to get what/where you want. It’s the passion you carry with you everyday. It’s in your heart. “The Fuel is what has always been there to make it.”

J57: I made this beat in 2009 and had a couple of people demo out their songs for it but nothing was “it” like this song was!  I had Akie Bermiss come back to do some extra vocals in the background of the verses after we had already pretty much finished the song; I knew it was missing something.

Koncept: This was one of the first songs we recorded after getting back from LA and just finishing the album. We were sitting down and having meetings with a few different major labels, and it was an extremely exciting and proud feeling knowing that our music was wanted by all these people.

J57: I originally used this beat for my solo album back in 2008, where I rap over my own beats. I wrote a whole song, which was a story about a girl that was a “good girl turned bad” and even had my homie sing an amazing chorus on it.  I played the song for some people and they all loved it, but I didn’t so I scrapped it along with the entire album.  I’m glad I did that, because this song wouldn’t have happened if I hadn’t scrapped my version; and this song is one of the best songs I’ve made to date.

Koncept: I was in Portland for a little while, and this was actually the first song I recorded while in the city. I was going through a lot of different changes – relationship, leaving the place I lived in for 6 years and called home, the music and our business structure while working on the records, financial stuff, etc. I know some people thought, or saw, or would see my life as a little crazy, but I saw it as beautiful.

What people might have seen as chaos or disorder with these changes I was making, I knew it was what I needed to make me better, and to me everyday felt more beautiful and amazing than the last.

The first vocals that I wrote or recorded for the song was the bridge, “chaos is beautiful…” Not everything is easy, or so crystal clear, but that’s what’s attractive to me. I find when things are a little more difficult, and then you overcome them, that’s when you can see and feel the true beauty in it.

J57: I made this beat a year ago at my home studio with my good friend, journalist, Jason Chang from URB Magazine over.  We were hanging out, drinking some booze and I was teaching him how to make beats, when I struck gold and made this beat by accident.  I was just messing around, showing him how to use Reason (the beat making program I use) and we were both like, “This beat’s actually really dope!”  It was a happy mistake ha!

Koncept: We’re not here to just be listened to today. Our focus is making music, and building a brand that will be heard for generations and generations. We want your grandkids, and their grandkids playing our music.  We don’t follow fads or what’s trendy. Every song, every EP, every album is us, and we make sure who we are as people and artists shines through. The goal is to make timeless music.

J57: This song was originally going to be on our debut album “Flight” which is due out in the middle of 2016, but we decided last minute that it made more sense on “The Fuel” EP than it did “Flight”.   I then asked the homie Dice Raw from The Roots if he could sing a little bridge on it, and he was more than happy to!

Koncept: This song was meant to be a random single. It took us sometime to build everything where we wanted and needed it to be. In that process there obviously came a lot of changes and developments like in anything and everything your building. I am beyond grateful we had the patience to take our time and build it as we saw perfect, but at the same time, there were definitely moments that were frustrating and brought on some anxiety (laughs).  I recorded Jump one day when I was in one of those moods. Upset at some different things, a little bothered some people, anxious to get the music out, etc. I was going through beats J had sent me that we actually decided not to use and this one came on and I couldn’t believe I had previously passed on it due to how dope it was. I must’ve heard it when I was in a different mood.

Anyway, I hit him to see if it was still open and it was, so I wrote this song in about an hour and recorded it right there. The words just poured out of me. It’s one of my favorites on the project for sure.

J57: This song was going to be a loose single that was released before “The Fuel” but not actually on “The Fuel”.  We had artwork created for it and a video made, and everything.  But then we felt it wasn’t a good introduction to our new sound like the rest of the singles on “The Fuel” would be.  We knew the song was too good to be scrapped, so we decided to put it on the EP.  We’re glad we did that because with time it became one of mine and Koncept’s favorite songs on the entire project.

Koncept: Take your time with what you’re working on. Whatever that it in life. Always believe in yourself and never give up. It’s okay for it to take some time to come to fruition. The most important thing is the care that goes into making sure the result is proper. Don’t try to take any short cuts. It’s not worth it in the long run.

J57: I made this beat in 2009, trying to emulate some J Dilla style production but also trying to capture the feel/vibe of Exile’s production with the synths I used.  I then had my man Sene demo out a song over it and he absolutely crushed it, he rapped his ass off and sung a catchy chorus, but he later decided to scrap the song he made over it.  Years later I decided to dust this beat off and showed it to Koncept — he loved it  and recorded an incredible song to it.  We then brought in our good friend Denitia to sing the chorus.  Fun fact: Denitia is in a DOPE group called Denitia and Sene, with Sene who was originally rapping on this track — you gotta check them out!  I produced their first 3 songs, too.

Koncept: We’re always moving forward. Everyday. Wake up at 8am, I’m trying to be in a better place by noon. The best way to do so is to fly. Fly with us. I’m trying to get a mimosa upon boarding too. After the Bloody Mary’s that we drank at the gate of course. (Laughs)

J57: I made this beat in 2013 after we got home from creating “Flight” at Red Bull Studios LA.  I felt like it was a cool beat but wouldn’t make sense with any of the rappers that I work with.  Koncept heard it and disagreed.  He was right.  Ha!