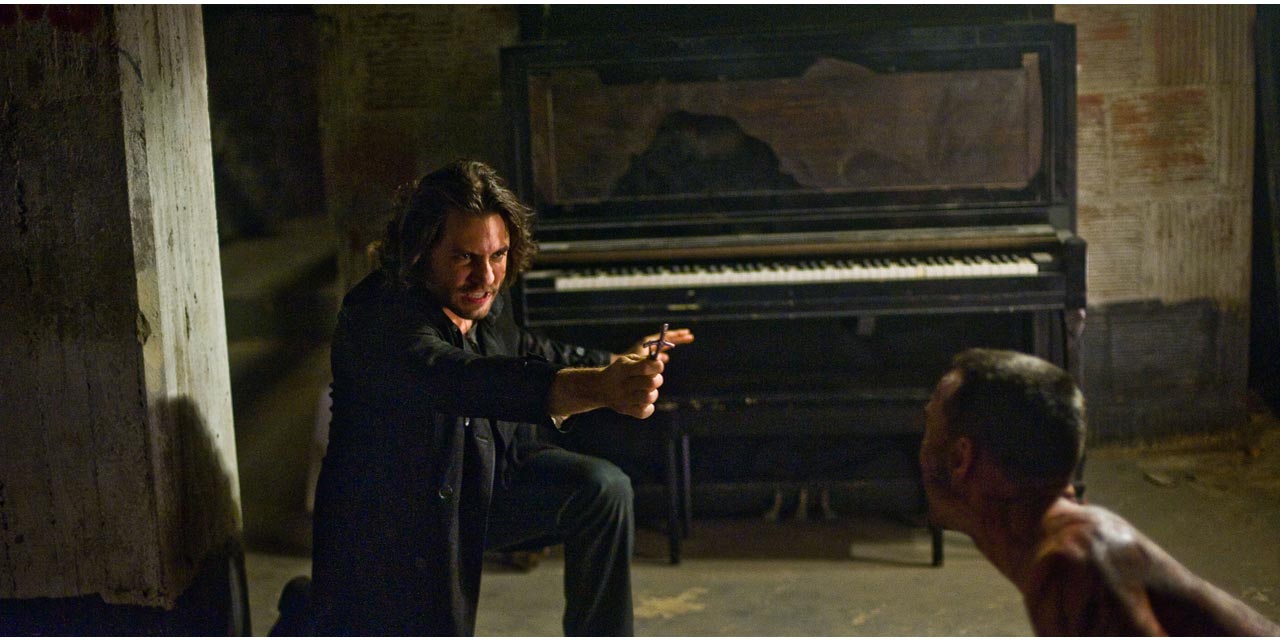 Thanks to Universal Sony, we got access to this interesting interview with actor Edgar Ramirez, who plays Priest Joseph Mendoza in Deliver Us From Evil, ahead of the film’s home entertainment release in Australia on December 11.


Q: So tell us about your character, you are a Priest?

A: Yeah, I am a Priest. My name is Joseph Mendoza and he is based on different priests who actually helped Ralph Sarchie during the time that he was active as a cop and also as some sort of exorcist specialist, devoting himself to fighting this phenomenon. This character is based on some of the priests who worked with him. Joseph is a priest with a very particular world-view, and a very difficult past. He’s a Jesuit, very committed to the church and to faith and to helping others and to compassion, but at the same time, very liberal as all Jesuits are. I mean there is precisely the contradiction, to be very faithful to the doctrine and very obedient to the pope, yet very socially involved and critical of the system philosophically. He is a character filled with contradictions and that is precisely why I was so attracted to him.

If I were to define this character by one word, it would be compassion, he’s a very compassionate man, and that’s present in his priesthood. This is a guy who knows torment, he knows how it is to be in pain. He knows how horrifying it can be when you are hostage to a substance, as the people that he helps are hostages to the devil. So, for me as an actor, it’s been very interesting to see how things that are apparently removed from each other, have so much to do with it. Some people compare addiction to being possessed by the devil or by an external force. You can see the similarities when people talk about possession or this phenomenon, they claim their lives to be uncontrollable, as if their lives belong to a higher, stronger, darker force.

Q: In your research, did you get a chance to meet with any of the real priests?

Q: Do you believe in all this?

A: I am very respectful. I wouldn’t be so certain in denying the existence of this phenomenon, but I equally believe, that at the same time darker forces are there, it’s up to us to connect to them or not, to let them in or not; in the same way that there are amazing, luminous forces out there. In the process of this character, I had been afraid, (laughter) right now, not anymore, cause in a way you level it out. I am Catholic, so I was raised with stories like this. And I was born if I am not mistaken, the same year The Exorcist came out, 1977 (note: Actually, it came out in 1973, he probably saw it a few years later), so by the time I was six, it was still the most horrifying movie out there, which actually it was a movie which opened all this phenomena to the public. I remember, that was the first horror movie that I saw, I saw three or four scenes, and I was traumatized like for three years, it was very difficult for me to sleep and I didn’t watch the whole thing, that’s how strong my reaction was.

Then 35 years later, they offered me this movie, so that was a way to end my childhood fears, by being the exorcist, but actually, Scott, the director is great and one of the smartest guys that I ever met and so compassionate and so sensitive, so elegant, he has such a beautiful universe in his mind and such a beautiful, classic handle of the camera and the aesthetics and it’s beautiful to be working with him. It was the fact that for me this character, more than being interested in fighting the devil and fighting those dark forces, his focus is on rescuing the people who feel like a hostage and trapped by these forces. Actually with Scott, we have been discussing this. His wife in real life, works with children with cancer, and some of the discussions that we’ve had mentioned that there are (two types of doctors), doctors who fight the disease, and there are doctors who try to save the patients.

So in my case, how I see this character, (though) he is a Jesuit priest that’s part of the company of Jesus, he’s more like an anti-terrorist, squad member who goes in to rescue the hostages, than kill the terrorists. So I think that that approach has been way more touching and sensitive for me.

If we were to analyze this from a symbolic point of view, it’s a metaphor. Exorcisms and possession and all of these things are metaphors of the eternal war between good and evil and how responsible we can be for the good things that we do, or the bad things that we do. It’s been very interesting for me as an actor to explore a character who believes that he can appeal in the name of some higher force, in this case Jesus, to help these people walk through that struggle. So in a way, he’s a therapist. And that has been very interesting. That on a personal matter, really touches me.

Q: It must be funny to say oh, come to New York, we are going to shoot a movie, but you get to go to the darkest, dingiest parts of the Bronx.

A: Well I am from Venezuela, (laughter) I have been to Rio, so the Bronx is a walk in the park. Even within the context of New York, I watch it everywhere, I am walking on the Upper East Side and I am watching my back. I am South American. (laughter) So I am also Latin, so the Bronx is very Latin, I have never felt threatened, and it’s not the same Bronx that’s made its reputation, it’s been very gentrified. Listen, something can go down at any minute, but if you are in Rio that can happen any minute. In my particular case, it’s been interesting just to see a different flavor of this culture and of course it’s a legendary place, so it’s great to shoot a movie on location, instead of going to Toronto and making it pass as New York. What’s so important about it in my opinion, is its’ texture. There’s a lot of texture that will help the movie feel more realistic and to just have that flavor.

Q: Mendoza is a man of faith and Sarchie is a cop, how did you work with Eric Bana to find the difference between these two characters? A: One of them made mistakes (and) has been able to forgive himself and the other is in the process. So, Mendoza, why he feels compassion, is because he has compassion for himself. We can talk about being on the side of God and still feel guilty. (But) I am talking from the point of view of Mendoza (who) believes that in order for him to help other people, and to really do good, whatever sins you’ve made, you need to come clean and be open about it. And then ask for forgiveness and especially forgive yourself because the act of confession is nothing but therapy. You come clean, you open up, and then it is out there, and then you start to make amends in order for you to be released, and to be forgiven. So more than a conversation with God, it’s just a way to start the process. You identify it, you say yes, “I have a problem”, and you start to make amends to the people that you think you have hurt and regain your life again. Sarchie is in this process and within the universe of the movie they (actually) need each other.

Mendoza is a man of faith, but he can also understand why people would not have faith. He’s not trying to impose and that was something I found so interesting about this character, that there’s a line when he says that science and religion are selling the same lie. They are making people believe that they got the whole world figured out and the truth is that everything they know is just a drop in the ocean what they don’t know.

I think that opening up to faith has a lot to do with observation, to really look at faith in good and just be sensitive enough and observant enough to look at the world and try to see the beauty and the good in it. That’s what I have to show Sarchie, because all he sees, are people doing bad things. And I also think for Scott, something that was very important for him to portray in this movie, is how people who are good at heart, and people who mean well, can also do bad things. Really bad things. So what defines the good and the bad in us? What we do, what are the motivations? Are you a bad person because of your actions? We don’t have the answer, but that’s what we are trying to explore with the movie also. Q: Did anything kind of scary or freaky happen to you during this shoot?

A: I don’t know, probably just, hypersensitivity. There was this thing that happened at the very beginning, but I don’t know if it was (freaky), in any case, it was just funny for Scott. I was in a bar and I went to the bathroom, and I saw that the paper machine, the ones that give you toilet paper if you put your hand on it, was broken. And then suddenly it went on, it just turned on and gave me paper (even though) I was very far away from it. So I said ‘okay, no problem’, and I wiped my hands.

So a couple of hours later, I am back in the bathroom, I am alone, and I heard already that the machine was broken and actually somebody from production had put some extra paper on the side for us. Then (the paper towel dispenser) went out again and this time I said ‘fuck’! (laughter) When I told Scott what happened to me in the bathroom the first time around, he said ‘really’? He asked me, what did I with the paper this time around, and (I handed him) a folded paper towel and said, “this is for you, you got a fax”. (laughter) And then other than that, one of my crosses broke, from the first exorcism. A metal cross, I put it in my pocket, and when I pulled it out, it was broken. But I wasn’t scared anymore.

Inspired by the actual accounts of an NYPD Sergeant