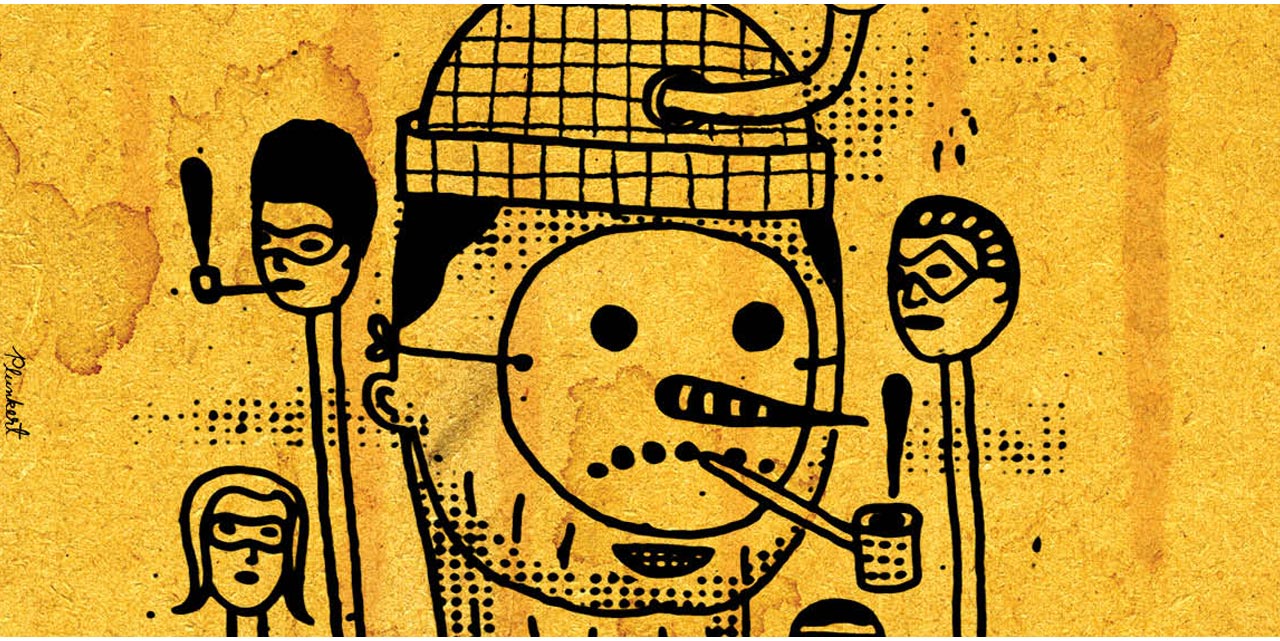 It’s bucketing down this humid Thursday night in Brisbane and yet it was well worth getting soaked to make it to Costin Street tonight. Johns Linnell and Flansburgh are at the helm of a brilliant TMBG show, delighting a remarkably cheerful crowd of assorted punters. And what an assortment. Teens in punk tees stand beside 50 and 60-somethings in post-work office attire – all as happy as clams to be witnessing this legendary alt rock outfit in the flesh. With over 3 decades of musicianship and 18 albums under their collective belts, there’s not even the vaguest hint of fatigue or staleness about anything they play tonight. The guys also remark about the inclement weather but appreciate what a beautiful venue we’re housed in tonight. The Tivoli is the perfect space for this fan-oriented, dedicated set of professionals. It’s wonderful to see them play in an intimate setting and create such a joyful crowd vibe. Working their way through two exhaustive sets of old and new material, TMBG remind us of the seemingly endless array of funny, dynamic, and witty tunes they have in their musical arsenal. Standouts are a brilliant rendition of The Mesopotamians, a killer extended version of one of my personal faves, Particle Man, which had many of us singing noisily along with great gusto, and a raucous, snappy version of When Will You Die, which, despite its dark lyrics, is delivered from behind enormous smiles. If these guys aren’t absolutely chuffed to play to their fans, they could’ve fooled me. They’re interactive, hilariously funny, and their live sound has a gorgeous, sparkling crispness to it that has to be heard (and seen) to be believed.

There are a number of funny elements woven throughout the show. ‘Mama Giant’ calls ‘from NYC’, over the PA and the crowd is treated to a side-splitting exchange between her and her ‘offspring’ in the band. We learn that, her labour being so fraught, she was only able to come up with three names for her five sons: 2 Johns, 2 Dans, and her ‘favourite’, drummer boy Marty. These guys have truly found the perfect blend between show-stopping musicianship and a seriously silly fun night out. During the break, audience members emerge, red-faced and grinning, clearly having a greatly entertaining Thursday night. Coffee cup balanced on his keyboard, John Linnell talks about jetlag in his typically good-natured manner. For his part, John Flansburgh is one jovial and very funny bloke, working out his trademark vintage Telecaster on faves such as Music Jail, We Live in a Dump, Underwater Woman, and Little Birdhouse in Your Soul (which, I believe, almost everyone is belting out tonight – hands thrust skyward). A diehard TMBG fan in front of me excitedly tells me that he’s seen them play live at least a dozen times, most recently in their home city of NYC. Along with some fellow long-time TMBG aficionados, he is dancing his booty off and doesn’t stop grinning all night. When Dr Worm starts up, he and his buddies lose it and are now dancing so feverishly I’m afraid they’ll all spontaneously combust.

There are far too many standouts to possibly cram into one humble gig review, but a side-splitting version of Statue Got Me High is one of the finest things I’ve seen in concert to date, Istanbul (not Constantinople) is delivered with unbelievable energy. Whenever Linnell cracks out his red accordion, you know you’re in for a treat. Honestly, it’s like they wrote these tunes yesterday and have been champing at the bit to share them with fans. If you missed them, this time around, do yourself a favour and make sure you catch them during their next tour. TMBG in concert is one of the most blissful experiences a music lover can treat themselves to: energy, joy, humour, talent – a hell of a band and a hell of a night.