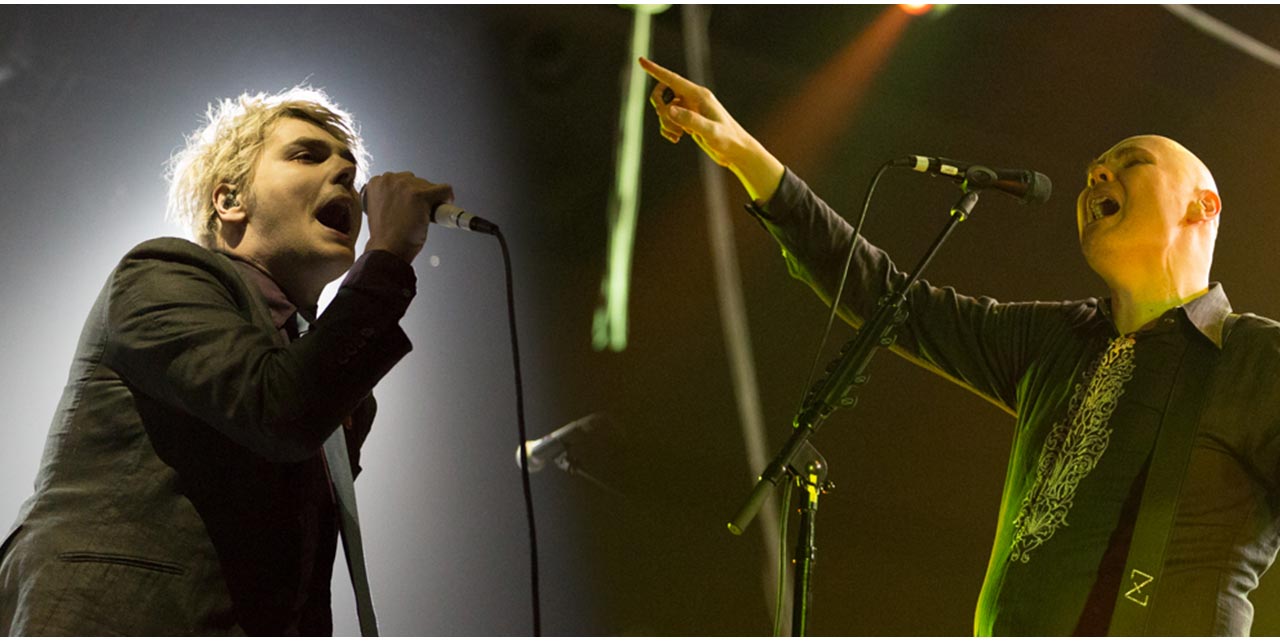 The smiling face of Luna Park played host to a triple bill of emo, alternate rock for The Smashing Pumpkins Sydney sidewave on Wednesday night. The relatively unknown, Japanese emo-rockers One Ok Rock, currently on their first tour of Australia, kicked off the night with an energetic half-hour set. With all the moves and energy of any skate band they hurled themselves around the stage with gusto. The four piece band made up of Taka, Toru, Ryota and Tomoya were bumped from the bill for the Melbourne sideshow on Monday night which is a shame for them as they certainly put their all into the performance. Plugging their latest single ‘Cry Out’ out on iTunes, the twenty-somethings will probably get a few purchases out of the night as the single had a good catch to the chorus.

My Chemical Romance front-man turned solo artist Gerard Way was the second support act. Looking sharp in a suit and backed by a four-piece band called The Hormones, Way looked and moved more Jarvis Cocker than his teenage-angst former self. Way admitted on Twitter earlier in the week he was fighting his urge to ‘geek out’ over his excitement to be on the same bill as his beloved ‘Smashing fuckin Pumpkins’. Way told of seeing the Pumpkins as a teenager with his brother (bass guitarist Mikey Way from MCR) at the famous Madison Square Garden, it was that concert that made him want to be a rock star. An experienced and likeable performer Way’s set was filled with tracks from his debut solo album ‘Hesitant Alien ‘ including singles Action Cat and ballad Brother, the latter with the most catch to it live and the song the crowd seemed to enjoy most.

When the instantly recognisable Billy Corgan and his current selection of Smashing Pumpkins took the stage it sounded like the audience was in for a show of their classic hits. Opening with Cherub Rock, 1979 and Ava Adore the mood was high, even if Corgan himself didn’t seem in to it yet. But never one to conform, Corgan quickly changed pace, playing a mixture of slower tracks including four from their latest album. In fact the set list was the exact same as the Melbourne sidewave from two days earlier.

Just last week the gig was moved from the 5000 capacity Hordern Pavilion to The Big Top, reportedly to share production with Soundgarden. However with the Big Top capacity of 3000 there was still room for the audience to move freely. The venue change would more likely haven been a result of ticket sales as even the top seated section of The Big Top was closed off. At their height in the 90s Corgan‘s indifference and rebellion against the normal came across mysterious. Now older and heavier set, the same indifference at times came across more as lack of interest. Despite this measured approach the crowd still wanted to party with the front man, obediently clapping along when asked to do so even in the slower middle part of the night. The crowd though made it clear they had come to hear the classics, chanting for the iconic ‘Zero’ for most of the night.

A cliché enthusiastic fan yelled ‘we love you Billy’ to which Corgan replied ‘my name is William, Billy died a long time ago’. As amusing as William probably gets, it did segway into a perfect opportunity to introduce the band. The current editions of the Smashing Pumpkins is basically another ‘super group’ in the massive Soundwave 2015 line-up along with Killer be Killed and Terror Universal. This touring Pumpkins line-up consists of Rage Against the Machine drummer Brad Wilk, The Killers bassist Mark Stoermer and the only other official Pumpkin member guitarist Jeff Schroeder; a really virtuoso guitarist in his own right. Schroeder has been an official full-time member since 2007 when he replaced founding guitarist James Iha.

The pace did pick up again soon with classics Drown and Disarm, the latter from the break-through Siamese Dream album albeit speed up to almost half it’s normal length but it worked to get the crowd jumping. As did rage-filled classic “Bullet with Butterfly Wings” which proved to be the crowd favourite of the night as Zero didn’t make the set list nor did ‘Today’. There were though three tracks from Mellon Collie and the Infinite Sadness so there was still plenty of reminiscing for the predominantly middle-aged crowd.

Even though very alternate and renowned for doing things on his own terms, there had always been a certain amount of image about the enigmatic Corgan and his Pumpkins. He obviously worked hard to achieve a particular image with the way he used to float onto the stage and had multiple dreamy female bass players. Anyone unfamiliar with Pumpkin’s back catalogue or just getting their first taste of pumpkins live at the Big Top would hardly believe the group had played Madison Square Garden, production was a minimal but the classics that they played still rock. While Zero was sorely missed there is a good chance it will be played at Soundwave on the weekend, it was played at both festival days last weekend and there was plenty of Zero merchandise on sale. So if they are happy to still make money off the t-shirts it should be played again very soon.