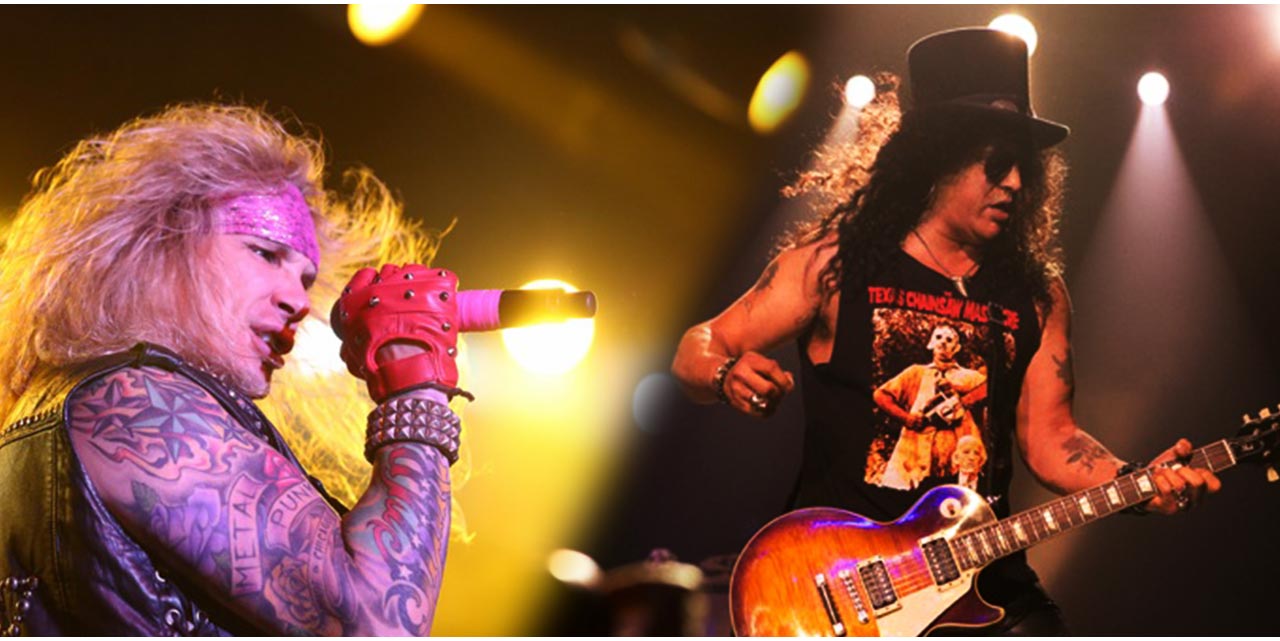 The last time Steel Panther visited Sydney they played the exact same venue, with two significant differences: back then in December 2013 they were headliners, and the Hordern Pavillion was almost sold out. This time around they are opening for Slash, and when they enter the stage at 7pm the venue is only one third full. This does not bother the band at all, as they kick off with an energetic rendition of ‘Pussywhipped’. Initially a lot of Slash-fans are looking surprised, not to sure what to make over the over-the-top-and-in-your-face Balls Out rock from these masters of hair metal, but after just a few songs the whole crowd is digging it, and Michael Starr and his men surely converted a lot of new Fanthers at this gig.

Steel Panther even remains entertaining during an acoustic interlude, usually the boring part of a rockshow. ‘Girl from Oklahoma’, a very crude but musically spot-on spoof of Extreme’s ‘More Than Words’, is preceded by a brand new sing-along called ‘Sebastian Bach Can’t Get A Boner Anymore’. What does Steel Panther know about the former Skid Row-singer that we don’t, and how did they obtain this info? Maybe that will become clear once they expand the catchy chorus with some verses and make it into a full-fledged song. As usual with Steel Panther, there are several comedy skits in between the songs with the band members bantering back and forth, where Michael Starr and especially bass player Lexxi Foxx frequently become the butts of guitar player Satchel’s vile jokes. With an audience coming to see a guitar hero, Satchel makes sure to show off his virtuoso chops in a jaw-dropping solo. Lexxi also gets his moment to shine in a hair solo where Satchel and Starr are making the bitching bass player’s hair go wild with blow dryers.

Lead singer Michael Starr is a fantastic performer but plastic surgery does not make him age well, as he is starting to look like the late Joan Rivers. This is not necessarily a bad thing though; after all both these comedians share a sense of humour that is incredibly harsh yet so funny you just have to laugh at it. Just like the world of celebrity gossip needed Rivers to hold up a mirror and put itself back in its place, the world of rock needs Steel Panther for those same reasons. This bitching band is a celebration of everything that is awesome and everything that is ridiculous about rock music at the same time. It’s great to have them on one bill with Slash, but these guys should be support act to no one, not even to an iconic artist like Slash. Only if the guitar legend would one day reunite with Axl, Duff & Izzy again, then Steel Panther should open up for him again. But that reunion will never happen, and that does not matter; Axl is enjoying his own thing with a big and bombastic showband carrying the old GNR-band name, and Slash is more successful than ever as a solo artist. Slash had something to make up for to the Sydney audience after his embarrassing cash-in performance at the 2014 NRL Final, where he played along to a live recording of ‘Bent to Fly’, for which he was reportedly paid $50.000. Apparently Slash does more appearances like that in the US, which led the makers of South Park to do an episode where they explain that, just like Santa Claus, Slash is not actually real but based on a Dutch folklore legend – after all, there is no way a real person could be at all those places at the same time.

Luckily Slash more than makes up for the disappointment of the NRL-gig. The guitar legend is clearly enjoying every minute of being onstage, and together with Myles Kennedy and the Conspirators he treats the audience to a Slash’s Greatest Hits-set going all the way back from Guns N’Roses’ legendary 1987-album ‘Appetite for Destruction’ to his most recent album, last year’s ‘World On Fire’. Only downside of the setlist is that the emphasis is clearly on the ‘World On Fire’-album, while the band only played three tracks from their much better ‘Apocalyptic Love’-album.

With Myles Kennedy & The Conspirators the axe hero has a steady backing band, especially Bass player Todd Kerns is an old-fashioned rock n roll showman. Myles Kennedy is refreshingly humble for a lead singer, and he has the charisma and most of all the voice to pull of all the old GNR-classics convincingly. During typical Axl-songs like ‘Rocket Queen’ or ‘Nightrain’ you do miss Axl’s dangerousness and craziness in the delivery, but it’s just great to hear these songs performed live again. For Slash it must be fantastic after years of playing with hard to get along with frontmen like Axl and Scott Weiland to finally have a lead singer with such a friendly demeanour. The crowd in the half-filled Hordern Pavillion is loving every minute of it, and the biggest highlights come when the band closes with ‘Anastacia’, ‘Sweet Child O’Mine’ ‘Slither’ and of course ‘Paradise City’. After a terrific set, the six string-wizard signs off with the words “See you fuckers at Soundwave”, where he & his band will do it all over again on Sunday.

Enjoy some pictures of the show!