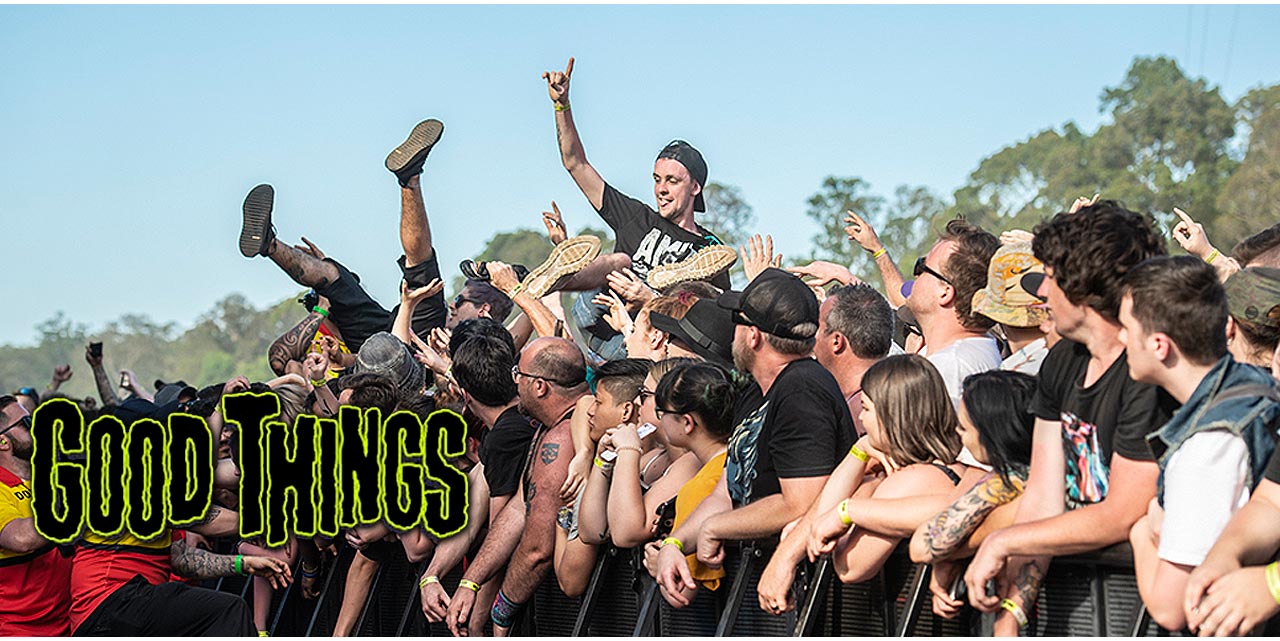 The music fans of Sydney had waited far too long to get a heavy festival and Good Things festival was an end to our drought. Despite the heat, the lack of shade and what seemed like Parramatta Parks own dust storm, Good Things provided Great Things.

Early in the day, in the blistering heat, the earlier acts such as Redhook, Void Of Vision, Waax, Boston Manor gave almost faultless performances with even The Wonder Years giving a shout out to the Waax members for an awesome performance, jokingly talking about how this was going to be their last show before turning into a Waax cover band during their set. The bar for the talent expectations was risen exceptionally by Northlane’s performance. Front man Marcus Bridge’s vocal ability and showmanship has matured and grown exceptionally fast since his time with Northlane started. Energetic and explosive with purple confetti and pyrotechnics the boys ended their set with fan fave Quantum Flux.

Spoken Word- Experimental Rock group La Dispute gave an emotive and passionate performance with tambourines being flung violently between the hands of front man Jordan Dryers, breaking it two songs in, singing the songs I feel I would have written as an angsty teenager.

Over the other side of the venue, Vegas brothers Palaye Royale tore up the stage with their almost classic rock and roll experience. All with their very own looks, guitarist Sebastian was giving AC/DC vibes with his Angus Young inspired stage present, but with a twist of 1980s Brit Pop. The raw vocal talent of Remington was overwhelming. The original sound, raspy falsettos and range Remington has really makes these guys one to watch.

It was like a swarm from all corners of the venue to see Baby Metal in their debut tour of Australia. The Japanese Metal Princesses brought more than just a set list to the stages of Australia…They brought costumes, choreography, and “kawaii” cuteness; as a whole, this was more than just a gig, it was almost like watching a heavy theatrical production with hit sensation Gimme Chocolate! and “Karate” breaking more than just the girls out in dance.

The day started positively with the happy punters enjoying the company and the music, but unfortunately the day had a sour taste with the unfortunate and untimely death of a security guard during Tonight Alive’s set. The professionalism and quick action to the situation by the police, medics, security and promoters of the festival was to be commended with many of the attendees not being aware until Good Things released their official statement on their Facebook Page earlier today. Spotlight Report wishes to give their deepest condolences to the victim’s family and friends. Mayday Parade gave a somewhat shaky start to their set, understandably being affected by the situation.  But managed to lift the bad feelings and give their fans an enjoyable show.

Family man Bert McCracken from The Used enjoyed the novelty of playing in his home town living “between 5 and 35 minutes” from the venue, with his daughter singing the rightful Australian anthem of the PlaySchool with the crowd, and holding his newborn with a tease of Smells Like Teen Spirit. Watching The Used live, never gets old. Always a great time, always a fantastic performance, seeing the older songs live always brings a huge nostalgic rush to many long-time fans.

Bullet For My Valentine seemed to steer away from most of the older classics, seemingly maturing almost as much as Matt Tucks facial hair. Fans enjoyed the newer material, but noticeably the excitement and buzz of the mosh changed dramatically when the riff of Tears Don’t Fall began, with everyone screaming the chorus. Dropkick Murphys brought the party to the festival, with an energetic set full of Celtic Punk  tunes that included hits like “Rose Tattoo” and “I’m Shipping Up To Boston”. Both singers kept the crowd going by jumping off the stage and singing alongside the mosh-pit, even throwing their mics to the punters to singalong, leaving all the crowd asking for more.


All Time Low had the hard task to following up Dropkick Murphys‘ set, and they clearly struggled a bit, even awkwardly attempting to crack some sexual jokes to engage with the crowd. Fortunately for them, they had a loyal fan base that after some tracks allowed the band to get loose and play a full set of hits. The sun started to set, the breeze started to roll in but the heat and energy from the always spirited Stone Sour front man Corey Taylor, with fire and confetti cannons, make sure the exhaustion was lifted, and the moshing truly began. Furthermore, the crowd started singing ‘Happy Birthday’ to the charismatic frontman, whose opening words where “Sydney you beautiful mother f**ckers”.

Stone Sour played a solid set, full of hits including Through the glass, Song #3, Absolute Zero and ending their set with Fabuless.

Headliners The Offspring hit the main stage around 8:50 to play their hit album Smash in full, with singer Dexter Holland and his long-time bandmate Noodles opening with Bad Habit and Gotta Get Away, in front of a crowd that packed almost every corner of the venue to see them. The band kept going in full force, with hits like What Happened to You? and ending the first part of their show with Self Steem.

After a short encore, The Offspring treated punters with a bunch of fan-favourites, including All I Want, Why Don’t You Get a Job?, Pretty Fly (For a white guy) and even cracking the AC/DC classic Whole Lotta Rosie unleashing the mosh-pit in full force.

Good Things festival proved that despite all the difficulties put by the local government against this type of shows, Live Music is alive in Sydney! – Australia’s Rock Prayers Have Been Finally Answered!

…and stay tuned for our mega gallery of images!