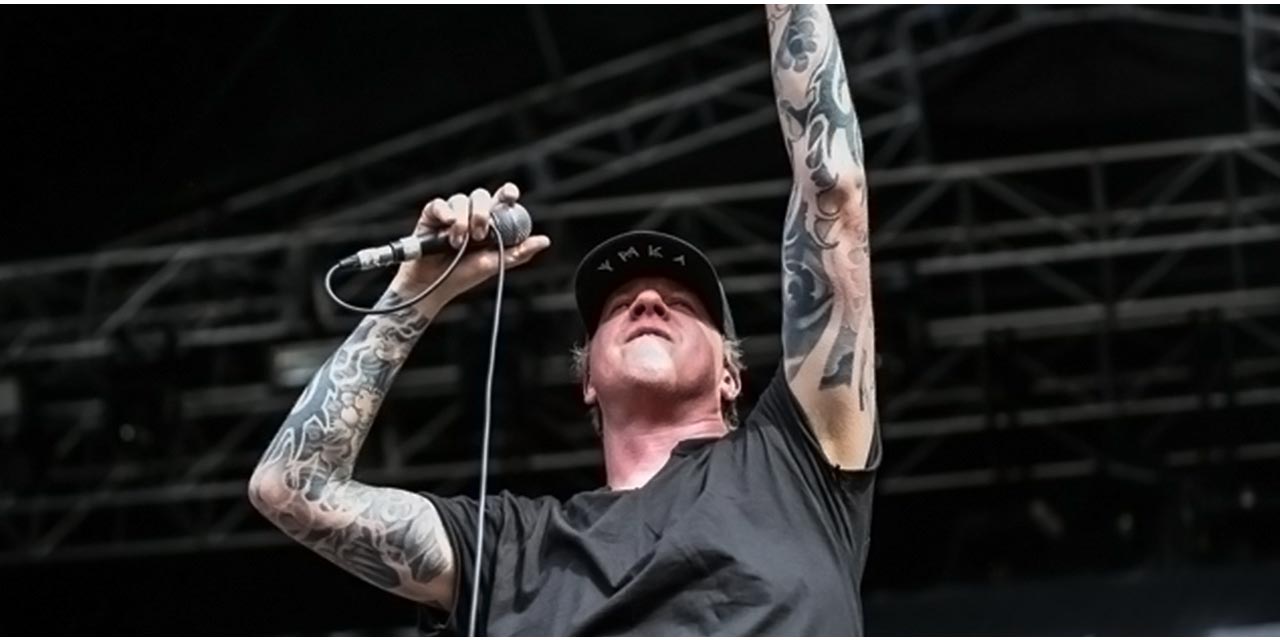 The industrial institution that is Fear Factory brought their assault of machine gun-rhythm riffs to the Metro in Sydney, bringing along Terror Universal and Exodus for support. When Terror Universal took to the stage the venue was still rather empty, and in combination with half the venue being blocked off due to low ticket sales this created a bit of a “Spinal Tap with puppet show”-vibe. But with their ghoulish masks on, the guys from Terror Universal delivered one hell of a nightmarish puppet show. This side project from Ill Nino-members Dave Chavarri (a.k.a. “Massacre”) and Ahrue Luster (a.k.a. “Diabolus”) and two undisclosed former or current members of Machine head and Soulfly kicked off the night with a short but energetic performance with songs from their debut EP “Reign of Terror”. Their freakish looking masks automatically conjured up comparisons with Slipknot, but this band doesn’t really need such gimmicks since the songs are strong enough already. When singer “Rott” suggested the crowd to start a pit, a group of guys gave it a shot, but they ended up running around in a circle without managing to mosh into each other. Seriously, how hard can it be to start a pit?

Trash legends Exodus were up next, and by this time the crowd size had doubled. The turnout was still disappointing, in hindsight the Oxford Art Factory would’ve been a much better location for tonight’s gig. Together with Testament, Exodus are considered the runners up of trash metal after the big 4 of Metallica, Anthrax, Slayer and Megadeth. Even though the band has heavy riffs and fantastic guitar solos, most songs are not up to the same level of that of the Big 4, or Testament’s. Obvious exceptions are the terrific stand-out tracks ‘Blacklist’ and ‘The Toxic Waltz’. What Exodus lacks in the song writing department, the band makes up for in sheer effort: energetic axeman Lee Altus connects with the crowd, and drummer Tom Hunting showed class & style by thanking each member of their local roadcrew, and by dedicated the show to his late drumtech.

Exodus has had many line-up changes in the three decades they’ve been around, and ironically enough the only member who never left the band, is not present on this tour. Guitarist Gary Holt, who also replaces the late Jeff Hannemann in Slayer, had to stay in the US since his dad got very ill. Luckily the band found a last-minute replacement in Kragen Lum from Prototype & Psychosis to trade off terrific guitar solos with Altus. Since the guys also play together in Heathen their dual playing went seamlessly. Few metalbands know how to write great songs, but singer Burton C. Bell and guitarist Dino Cazares really have a knack of cranking out tunes that are crushingly heavy yet catchy at the same time. Fear Factory delivered a massive greatest hits set, with tracks like ‘Shock’, ‘Edgecrusher’, ‘Damaged’, ‘ What Will Become’, ‘Archetype’, ‘Martyr’ and ‘Scapegoat’, and they closed off with four songs from Demanufacture, to this day their most renowned album. Most of these songs are 20 years old by now, and it is just bizarre how they still sound ahead of their time. The band did have some technical issues; multiple times Cazares was handed a guitar where the high strings were out of tune (which obviously started to piss him off) and Bell seemed to have issues hearing himself as he was off-key a few times.

It is great to see Burton C. Bell and Dino Cazares reunited after the guitarist left the band between 2002 and 2009. Bass player Christian Olde Wolbers and Drummer Raymond Herrera (who both left after a dispute when Dino returned), may be missed, but newcomers Matt DeVries and Mike Heller have settled into their roles well. Devries is the most energetic band member on stage, and just the fact that Heller is able to play Herrera’s impossibly fast drum patterns makes him worthy to sit behind the Fear Factory drum kit.

Although it is fantastic to see these Industrial Pioneers at an intimate venue like the Metro, it is at the same time frustrating that Fear Factory still hasn’t become as big as everyone thought they would be when Demanufacture came out. Especially with gigs like playing Big Day Out and supporting Metallica, Burton C. Bell and his men should be big enough to headline at a venue like the Luna Park instead of a half-full Metro. As the band left, Bell announced a new album is due by the middle of this year. Perhaps this follow-up to 2012’s The Industrialist will be that full-fledged return to form that can get this ground-breaking band a well-deserved bigger audience.