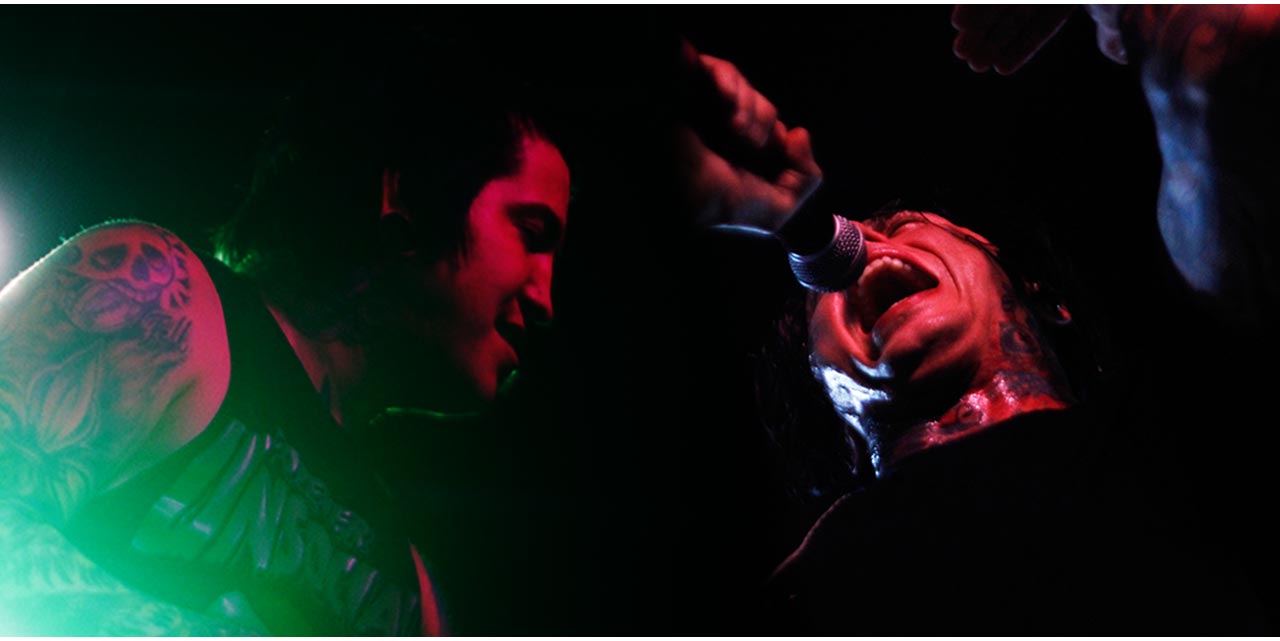 Our 15 year old selves were squealing when finally Escape the Fate and Falling in Reverse played a show together last night at the Hi-Fi in Sydney. After all the discrepancies between the two bands, they came together for the “Bury the Hatchet” sidewave, supported by The Color Morale. Coming to the gig we had not heard a lot about The Color Morale, but leaving we won’t forget them. They played an extremely high energy show with a lot of guitar swinging and arms flailing. They had amazing communication and participation like a band we have not seen before. Lead singer Garret Rapp encouraged audience members to come over the barrier to sing songs with him before he jumped into the crowd to join the circle pit, as well as the crowd chanting songs through most of the set. Addressing issues such as self-esteem before playing their song Pray For Me, Rapp addressed a fan called Daniel who had been waiting since 6 am just to meet them.

Escape the Fate entered the stage in true fashion, exciting the already excited crowd and jumping straight into their set, along with guitarist Thomas “Tj” Bell dressed in board shorts with the Australian flag on it. All band members were very facial with their expressions, with tongues continuously sticking out and fingers up. They were having fun, and so were we with call and response and singing along to the old songs such as The Flood and 10 Miles Wide– which was apparently an homage to the size of singer, Craig Mabbit’s penis. Mabbit, as always was an amazing front man being polite and giving the other members the limelight for their own little parts. The only thing that seemed to disappoint fans was the lack of older songs played. Crowd participation was high with the request of lighters and phones to be held up during Picture Perfect. After a few technical glitches, they finished their set with Mabbit standing on top on the crowd whilst singing to This War is Ours.

Finally, at about 10:30, Falling in Reverse entered the stage to a screaming audience as front man, former Escape the Fate singer Ronnie Radke walked on. It seemed as though there was little animosity between the two bands- apart from the fact most of FIR’s songs were about the former band.

Ronnie’s voice was breathtaking with it being as amazing as it has been with such a strength behind it, even singing acapella on stage which gave us shivers. A constant pace of the stage and sometimes a little wiggle or a dance made for an entertaining performance. It was a serious, yet not so serious performance with Radke laughing throughout Tragic Magic. Notoriously known as a self-professed asshole, Radke showed his soft side when a fan had passed out and he stopped the set to see if she was okay, and then asking the crowd if anyone else was going to pass out, making light of the situation.

There didn’t seem to be a lot of crowd communication, but they still played as a tight unit. It seemed to just be Ronnie and a band for most of the set until he introduced them all individually, to show off their skills with drum solo’s or epic guitar licks.

After playing their live debut of Just Like You, Falling in Reverse made our 15 year old self cry a little [a lot] inside when they played the classic Escape the Fate songs Not Good Enough For Truth And Cliché, and Situations which made the crowd sing at the top of their lungs, continuing to the last song The Drug in Me Is You.

This was truly an amazing show that made fans very happy.

Check some snaps from the show below: