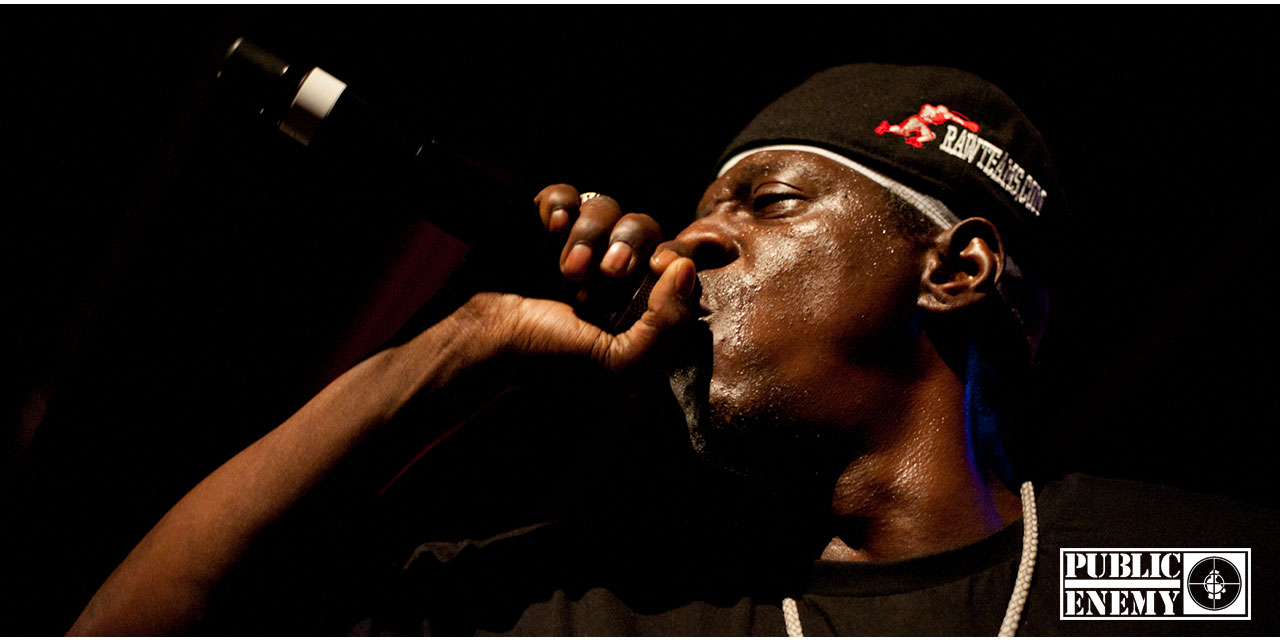 “Hip-Hop is one love”: that was the main message the MC conveyed to the crowd while getting them pumped for the arrival of true Hip-Hop legends and recent Rock & Roll Hall inductees Public Enemy to hit the stage in Sydney once again! The show began around 20:30 with opening act hip hop singer Citizen Kay bringing his best tracks and freestyle to the half full venue at the time. K was able to warm up the audience with a glorious 5 song set, helped by his fantastic drummer that sometimes stole the show with his energy.

Following Citizen Kay’s performance, a very unique soundcheck began, as one of Public Enemy‘s crew members took over the microphone while the guitars and drums were tested, doing some free styling, singing and even giving away some freebies to the crowd in the already almost packed venue. It was fantastic to see how the band spread their love by having clear rules laid out like Hip hop is one love, no fighting at a hip hop concert, and no throwing stuff on stage. An idiot in the crowd still tried to ruin the rules after throwing something just seconds after these were announced, but aside from this incident the crowd was well-behaved and here to enjoy the music. At 9:40 the rap legends made their entrance, with Mr. Chuck D opening the hip hop party and straight away bringing the entire house down. The crowd really went nuts when Flavor Flav joined in after the second song: it was Public Enemy in full glory!

However, something was missing as Flav was not carrying his iconic clock around his neck, and people seemed to be wondering why it was missing. Reason enough for Flavor to explain that his huge white clock was donated to the Rock and Roll Hall of Fame when they got inducted there last year. After this explanation he still brought out a small clock (or a big watch) to wear as a necklace for the rest of the gig.

The night kept going and going until almost midnight, as Public Enemy performed songs from their entire career, with “Fight The Power” making the crowd going insane as Flavor Flav jumped into the audience and went crowd-surfing three times! Funny moments included a 10 push up punishment for DJ Lord for making a mistake during the set, as well as a bunch of female fans that showed off their dancing skills during Flavor’s “Shake your Booty”, and at least one of the ladies clearly had too many drinks at that point already.

At some stage, the show slowed down as Flav started to thank and introduce all of his friends he made in Sydney along the years, by giving some speeches and even taking some of them onstage. Nevertheless, the crowd listened and clapped with respect.

Overall, Public Enemy delivered a solid show with no signs of ageing, after performing non-stop for a good 2 hours, bringing their music and sending strong messages to the new generation of self-proclaimed hip hop artists, who seem to need computers to achieve what these guys can do with just their voices!

Enjoy some snaps of the show by Christina Mishell Photography below: