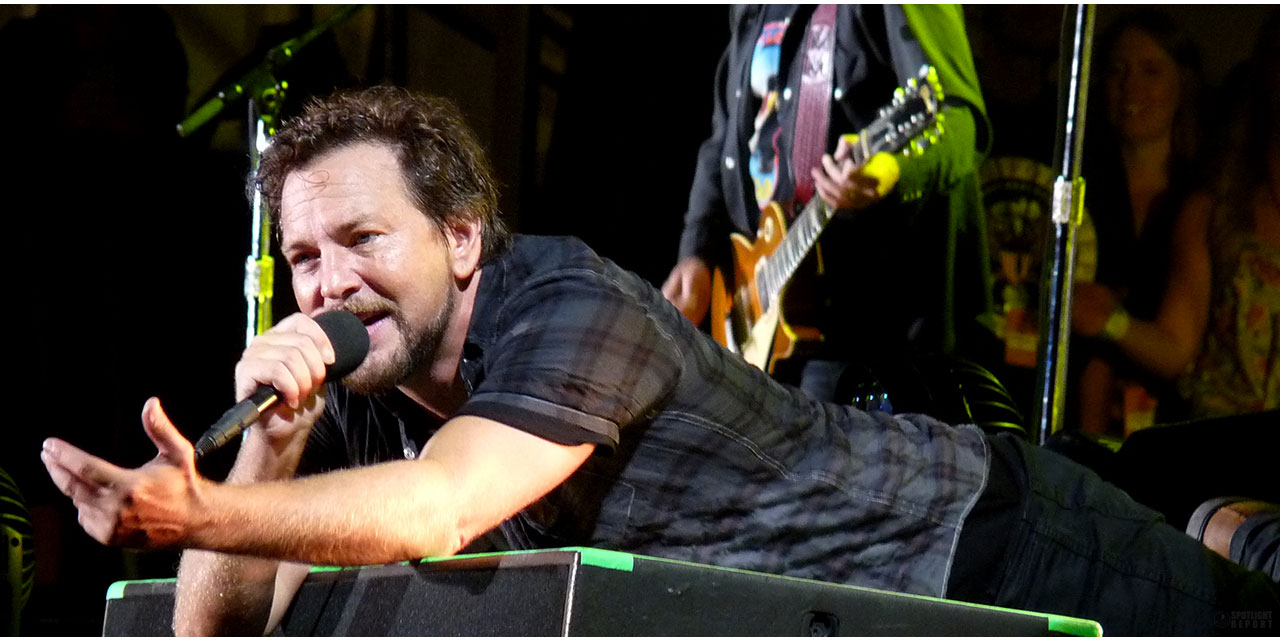 Australia Day was held at Sydney’s Olympic Park in full force as Big Day Out hit Homebush with a lineup that sadly did not excited fans enough to sell out. However, one band made the festival feel like a full house from 8pm: Pearl Jam who played for almost 3 hours delivering a show that will be remembered as one of the best live performances from the band in their entire career. Sharp on time as usual, the grunge legends hit the stage when there was still some daylight, with Matt Cameron jumping on the drums, while keyboard player Boom Gaspar quietly approached to his spot, followed by guitarist Stone Gossard who took over the left side of the stage , opposite to guitar virtuoso Mike McCready and bass player Jeff Ament who were at the right for almost the entire show, while the beloved and charismatic frontman Eddie Vedder hit the first words of Yield’s ‘Do the Evolution’, unleashing a pure rock and roll celebration in Sydney.

Almost without pause, the band continued their set with ‘Mind your manners’, the first single of their new album Lighting Bolt, proving once again that they sound even better live. The show continued with a very talkative and friendly Vedder, interacting with the crowd, sharing about his surfing experience in our country and also trying his best Australian accent to celebrate Australia Day with all his loyal fans. The trip across Pearl Jam’s discography continued with a classic of Versus, as the words “one, two, three, four, five against one” introduced the powerful song ‘Animal’, that was followed by No Code’s ‘Hail Hail’.

The show continued with ‘Corduroy’, ‘Lighting Bolt’, ‘In Hiding’ (a special request passed onto Eddie via surfer mark Richards) and Ten’s hit ‘Even Flow’, that as usual included a kick ass solo by McCready performing with his guitar on his back.

After that, the night continued with an Eddie Vedder enjoying his classic bottle of wine, joking and sharing some stories with the Aussie fan base, before playing ‘Severe Hand’ from the band’s self-titled album. ‘Sirens’ was the next track, and what a performance that was: the new ballad sounded flawlessly, even better than on the record, proving how the quality of the band is still top notch after all those years. On stage Pearl Jam never deliver less than what they put on their albums, a difference with many bands that sound great on CDs but disappoint during live shows. The moshpit came to life when ‘State of Love and Trust’ brought the adrenaline back to an already excited crowd, that then enjoyed ‘Unthought Known’, ‘Insignificance’, ‘Let the Records Play’ and a personal favourite of this reviewer ‘Spin The Black Circle’ – a song that I must say almost made me tear up of joy as it was the first time I had the chance to experience it live.

No matter how tired the fans were after being the whole day at the festival, with some of them (including us) staying at the blue stage for hours in order to be in front row, the energy never disappeared, especially when ‘Rearviewmirror’ closed the first part of the show.

After a short break, the band treated the die-hard fans with Ten’s bootleg ‘Footsteps’, followed by the always fantastic ‘Elderly Woman Behind the Counter in a Small Town’. However, Pearl Jam have another surprise for the grunge army, as they make us go back in time to a pre-Pearl Jam era, as the band performed a medley of Mother Love Bone’s ‘Chloe Dancer’ and ‘Crown of Thorns’  bringing the legacy of the late Andrew Wood back to life. Eddie Vedder wanted to pay a  tribute to Australia on its national day by performing a solo version of the Hunters and Collectors-classic ‘Throw Your Arms Around Me’, with the entire crowd singing along.

The second part of the show was closed by ‘Better Man’ and ‘Porch’, with the latter including some light bolts flying around the stage and with Vedder going back to his 90’s era by climbing on one of them and singing while hanging and bouncing around, an energetic way to close the second act.

After the second Encore, the band returned, with Eddie and his band mates saying that despite being told to play one or two songs more, they will go over that as it was Australia day, and what a way to start closing the night as 3 hits from Ten were played in a row: ‘Jeremy’, ‘Black’ and ‘Alive’. At that stage, most of the people were sure the show was over, as Alive was the last song in previous tours. However, Pearl Jam had another special treat for Sydney, as they invited their grunge mates Mark Arm and Steve Turner of Mudhoney to literally jam alongside them by playing a cover of MC5’s ‘Kick Out the Jams’ a postcard that will be remembered forever as it was a trip back to the origins of the grunge with a garage style of sound and energy that was simply unique.

After thanking his Mudhoney mates, Eddie ran across the stage to greet fans everywhere, even walking to the orange stage far away, while Jeff, Stone, Mike, Matt and Boom, hit the first tones of the amazing rock anthem by Neil Young, ‘Rockin’ in the Free World’ making it the perfect ending for a perfect set-list and another flawless performance of one of the best bands in the world, that doesn’t need big stage props or pyrotechnics to impress, as the quality of each one of its members has no limits!…ROCK 4 CHOICE! PEARL JAM FOREVER!

*Fan photos for illustration purposes only. No Commercial Gains