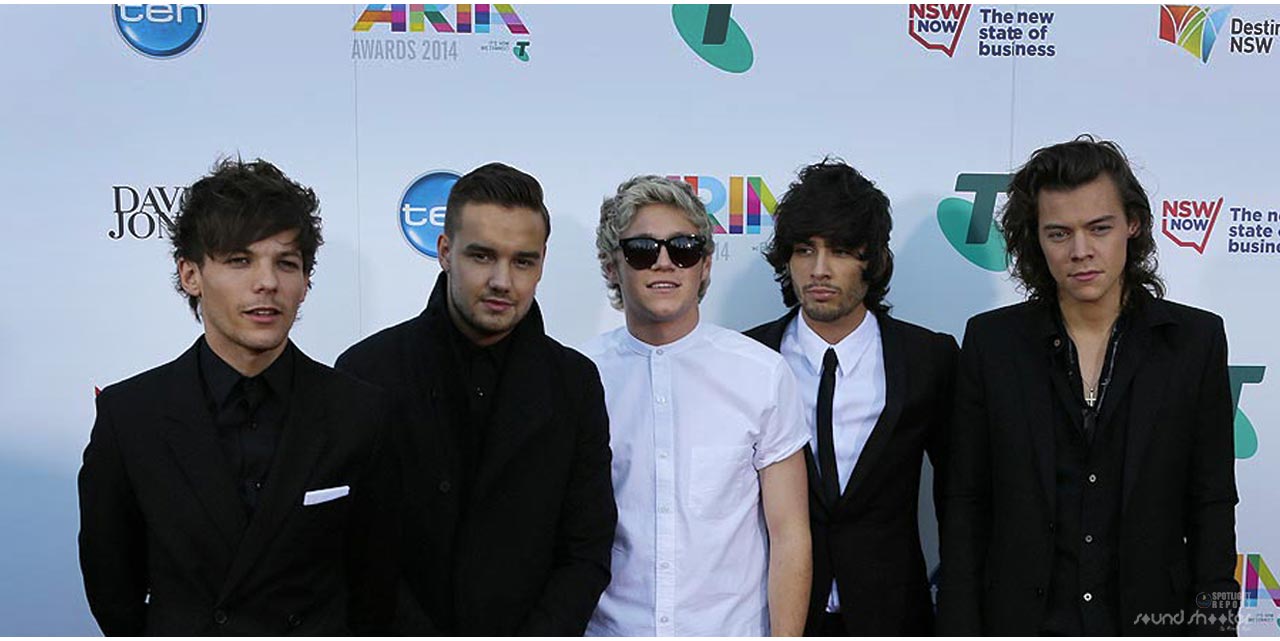 The pint sized 2012 X-Factor winner burst onto stage with her bubbly personality, singing hits What You’ve Done to Me, Soldier and Firestarter – the 27 year old thanked the audience for coming to see her and acknowledged One Direction for the opportunity to support them.

Samantha Jade is bright, humble and energetic on stage – she definitely has a bright future in the industry.

Up Next – Uk Pop Rock Band Mc Busted.
These boys know how to party on stage! A cross between the cheek and naughtiness of Blink 182 and the fun punk energy of Australia’s very own 5 Seconds of Summer. These boys are definitely high-energy and crowd revving giving a fun performance.

They rocked the stage opening with ‘Air Hostess’ before performing a 40 minute, 7 song set including their new Single ‘Get Over It’ and finishing with their hit ‘Year 3000’ which had the whole crowd singing along. The boys acknowledged the crowd and how happy they were to be in Australia making cheeky references to Aussie animals, Aussie TV show Neighbours and even the Opera house as reasons why the love it here.

These guys have an energetic stage presence that really gets the crowd jumping , clapping, dancing and singing along to their catchy tunes.

The boys announced they will be back to do their own Sydney show later in the month on FEB 22 at the Metro Theatre – definitely one to watch!!

Anticipation built as fans waited for the 1D boys to take the stage.

Just as a lull had hit the crowd a voice over of the boys talking to the crowd whilst a safety video of clever icons told the crowd to look out for each other and be safe to enjoy the show. 1D mania kicked in at the just the sound of their voices! This was followed by a collection of crowd pleasing dance pop tunes to get the crowd pumped and on their feet including LMFAO ‘Party Rock Anthem’, Bruno Mars ‘Locked Out of Heaven’, the Grease Mega Mix and even the ‘Macarena’ which had the whole crowd-up and doing the moves in unison and singing Beyonce ‘Single Ladies’ – sure all the fans were dancing and thinking of their fave 1D member in that song! What a fun, clever distraction for the crowd who were anxiously awaiting the arrival of their 1D boys!

After a long wait of nearly 1 hour – the lights went out and the build up started…. the main front stage equipped with multiple big screens flashed to life with images of the band and then each member individually was introduced to the crowd, each receiving deafening screams from the crowd, then finally the boys were on stage opening with ‘Clouds’ from their new album FOUR.

The boys were all smiles singing and waving to the crowd – looking genuinely happy to be back on stage, back on the road again!

They said “Hello Sydney!!!” in their British accents before going into their huge current hit song ‘Steal My Girl’ which really ignited the crowd.

This was their fist show on this brand new tour – Louis saying “What a perfect audience to start a tour – right here in Australia!! – Liam then proclaims his excitement likening it to “the first day back at school with your mates!!”

The boys each take turns during the show to speak to the crowd to express their gratitude for them coming out to see them and how thankful they were to be able to perform “a whole day away in Australia!” Between Niall attempting an Aussie Accent to say “G’Day Sydney How ya Goin!!”, Harry’s flirty winks and kisses to the crowd and cameras and all members living up to their “daggy dancing” reputations – these guys sure know how to delight and make their audience feel special – even dedicating their song ‘Don’t Forget Where You Belong’ to all their fans for supporting them on their whirlwind 4 year journey so far.

The stage set up was very clever, split into 3 sections joined by catwalks, each allowing them to sit, stand, dance and interact with different sections of the crowd – an opportunity for fans to get a great glimpse of all 5 boys – the furthest stage even raising up during their song ‘Diana’ to elevate them above the crowd for yet another great experience for the crowd.

At one stage, Harry was seen interacting with audience members, even taking selfies, when he looked up and saw the other band members where at the other end of stage waiting for him to join them to start the next song causing him to sprint to join them just in the nick of time! It’s this dedication to fans that set these boys aside and show they care about what they do and the fans who have been there for them through it all.

Whilst the stages were set up to allow for fan interaction no matter where you were seated in the stadium, during some songs where the boys were at the farthest stage, the crowd behind them were forced to look at the main stage big screens to catch a glimpse of their idols, and sometimes the screens did not show the boys up close, instead showed videos, pics and computer generated “Super Mario” type images of the band – whilst this was clever, it was wasted as the crowd was craning to see the boys on the stage and frustrated as they could not see them when they were not projected on the big screens. Niall Horan is the surprise package in this band – not only like all the others can he sing, but he plays both acoustic and electric guitar in over half their songs on stage. After many songs you can see him run back to the band at the front main stage to be hooked up and he emerges with a guitar strapped on ready for the next tune – very impressive and a great show of this band’s multiple talents.

After a set of 24 hit songs including a 4 song Encore – the boys final song – ‘Best Song Ever’ – one of their catchiest fun songs to date was a fitting end to their show – closing with fireworks from the top of the stadium, it was a perfect way to top off what had been a well put together and executed performance by the 1D boys.

All in all it is easy to see that these guys love what they do – they have come a long way since their 3rd place in UK X-Factor in 2010 – they are polished performers who know how to please the crowd and interact with their audience to ensure they all walk away happy with the fun, intimate, energetic and sometimes spontaneous show they have seen.
These boys are born performers, who have cemented their place in Pop-Culture for a long time to come.

*Fan photos for illustration purposes only. No Commercial gains.