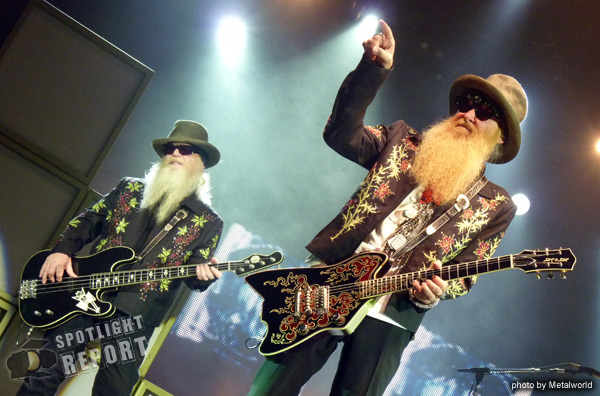 Our friend Metalworld just sent us a pretty cool review and some awesome pictures from the ZZ Top gig at the Enmore theatre last night, April 28. Check it out!

It has been well over 20 years since we had the Texan Trio in these shores and even after all this time ZZ Top never fails to deliver a quality show. This was a first for many and I was just as pleased to be here as the mostly over 50’s yo audience at the Enmore Theatre tonight most of whom I am sure would have attended this night with their nowadays adult children who grew up listening to ZZ Top. Their sound in person exactly reproduces the sound they produce in the studio. Their stage presence and they way they project it into the audience is excellent. Their stage show is great and clean. Families would not be offended if they brought little children. There was the unmissable touch of female presence during the show with 2 sexy ladies dressed up in bright red burlesque outfits joined the band on stage to present gibbons with a top light brown hat. There was also the odd funny moment when a member of the audience rushed to the front of the stage armed with a silver pen to ask gibbons to sign the back of his Iphone which he gladly did and also got bass man Duffy to sign it as well with gibbons ending the spontaneous moment by yelling “can we go on with the show now”?

For their well-known anthem “Legs” the famous  fluffy guitars made an appearance which I must say was one of the highlights I was most eager to see though not spinning anymore but still great pieces of rock history! During the show most of their songs still get that amazing yet iconic body synchrony of Billy and Duffy while they play their guitars which always proves a crowd pleaser and that was the case tonight with the audience bursting into cheers every time they executed the smooth moves!

The smooth Rock n’ Roll Hall of Farmers – ZZ Top have always had a penchant for hitting the stage with a strong load of dirty Texas attitude. With a unique look to back it up – their famous long beards and their matching black suits. ZZ Top hasn’t produced music like they did in their heyday in the ’70s and early ’80s, but their good ole boy rockin’ blues still speaks for itself. Billy Gibbons (lead vocals and lead guitar), Dusty Hill (vocals, bass, and keyboards), and Frank Beard (drums and ironically the only member without a beard) seem to have been nurtured by the god of the south himself. Gibbons lights his choppy chords into textural backwoods twangs while his well-worn voice still howls at the moon with authority. Hill and Beard keep the foundation lean and mean while laying down the law.

As far as stage lights go the roof was topped with a nice texture of red,blue,green, orange and yellow lights at the back with an excellent white light at the front giving the show a  sensational display of a multi coloured atmosphere backed up with a wall to wall screen showing images from all their clips and swirling psychedelic patterns. Frank Beard’s Drum kit was a masterpiece not only of powerful sound but of instrumental architecture resembling a drumming motorbike with spinning front wheels, a twin set of blue muffler and even shock absorbers.

These guys have been playing together for four decades now – that on its own is truly amazing. How many bands are able to keep their core members together for so long? The band hit the highlights right off the bat “Jesus Just Left Chicago” played its blues-drenched sensibility with a snarling attitude. The Newtown rebels in the audience were rockin’ in their boots. “Blue Jeans Blues” smoked with a raunchy boogie. “I’m Bad, I’m Nationwide” definitely took the crowd for a ride into depths of ZZ land. Gibbons then led the charge on Hendrix’s “Hey Joey” taking the hallucinogenic song into the whiskey bars of south Texas. His slide guitar warbled and sang like an ancient siren of the sea. Other hits performed were “Gimme All Your Lovin’,”,  “Cheap Sunglasses”, “Sharp Dressed man” and “Tush.” Everyone in attendance left with a three-mile smile and a bit more kick in their step. ZZ Top were supported by 2 legends of Australian rock, Darwin quartet The Poor and all time hellraisers Rose Tattoo.

Check some postcards of the venue below:

Thanks to our friend and contributor “Metalworld” for this note.

Note. These are “Fan photos” and were not taken for commercial purposes
Photo Credits: Metalworld