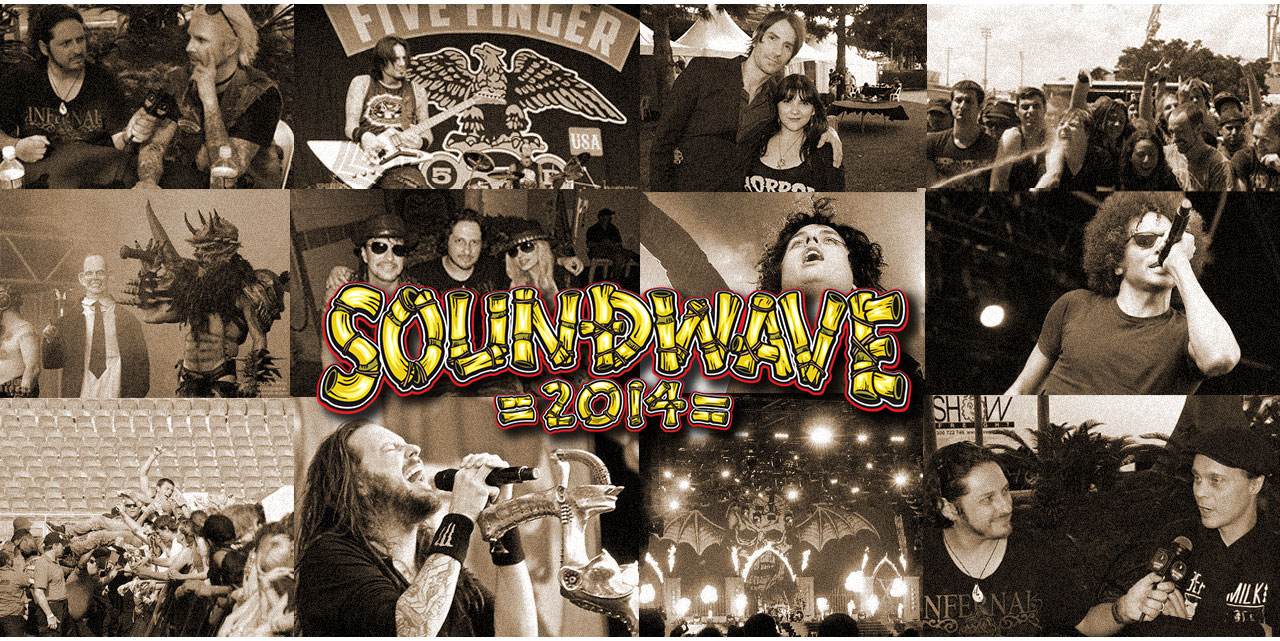 This year’s Soundwave festival in Sydney kicked off with an early heavy metal wake-up call at 11:00 am when the Swedish Viking rockers of Amon Amarth hit stage 4. ‘We are Amon Amarth and we are your f** alarm clock this morning!’, declared frontman Johan Hegg to a surprisingly big crowd for an early Sunday morning.  And this alarm clock came with an incredible Viking ship on stage! The Scandinavian metal formation played a short set including ‘War of the Gods’, ‘Death in Fire’ and ‘The Pursuit of the Vikings’. While many people in the crowd were waiting for Five Finger Death Punch, the industrial masked metalheads of Mushroomhead took the opportunity to turn those waiting into new fans, and they didn’t disappoint with a short set including ‘Sun Doesn’t Rise’, ‘We are the Truth’ and even a rendition of Pink Floyd’s ‘Empty Spaces’. The American rockers of Five Finger Death Punch played a powerful setlist including their anthem song ‘The Way of the Fist’, while new track ‘Burn MF’ from their latest album turned out to be an instant classic. The crowd went mental creating a massive circle dividing the crowd in two, while lead singer Ivan grabbed the hose to water everybody in the audience. The band finished with ‘The Bleeding’ and thanked the audience for what was one of the best performances of the entire festival up to that point.

Back  on Stage 1 legendary axeman Richie Sambora and Australian six string prodigy Orianthi gave away a guitar masterclass to the audience with a stunning set including Sambora’s ‘Burn the Candle Down’ and ‘Nowadays’. After some amazing solos they played INXS’ ‘Don’t change’ along with Bon Jovi classics ‘Wanted dead or alive’ and ‘Livin’ on a Prayer’.  And as if that was not enough they even showed their guitar skills by delivering a jaw-dropping rendition of Jimi Hendrix’s ‘Voodoo Child (Slight Return)’. Later that day we had the opportunity to interview Sambora outside his dressing-room and only at the last minute we found out that the guitar legend’s protégée Orianthi was joining us as well. Needless to say we had a hard time trying to avoid our inner “fan boy” coming out!

On stage 4 the arrival of Mr. Oderus Urungus and his band Gwar was delayed due to audio issues. The anxious audience waited patiently until Gwar showed up ripping off the stage with ‘Madness at the Core of Time’ and ‘Hail, Genocide!’, even beheading Prime Minister Tony Abbott on stage and spraying his blood to the crowd, who went totally crazy after this highlight.  We later caught Gwar’s Oderus arriving at the media area, kicking chairs and making everyone around him laugh by giving away some hilarious and totally immoral interviews. After the feast of gore and blood that is Gwar it was time to mellow out on Stage 1 with British alternative rockers Placebo performing songs from their latest release ‘Loud Like Love’, ‘Too Many Friends’ ‘Rob the Bank’ and classics such as ‘Every You, Every Me’ , ‘Special K’ and ‘The Bitter End’. The this year’s headliners Green Day were fantastic as usual, playing all their anthemic songs and even throwing in an AC/DC cover and a Metallica guitar riff. The punk rock trio once again invited people from the audience onto the stage to sing and play with them, which no doubt made it an unforgettable night for these fans (especially for a local Sydney girl who got to keep Billy Joe’s guitar!) as well as the entire audience. The 3 hour setlist included classics such as ‘Holiday’, ‘Let Yourself Go’, ‘Wake Me Up When September Ends’, ‘Welcome to Paradise’, ‘Hitchin’ a Ride’, ‘Basket Case’ and ‘Minority’ among many others.

In order to cover as much as possible, we divided our time in the last hours to see the last two bands on our must-see list: Avenged Sevenfold and Living Colour. Avenged Sevenfold played on Stage 3 to a crowd that was still surprisingly huge, considering the timetable clashes with Green Day, HIM, Mastodon and many others. Frontman M. Shadows delivered an incredible performance running around the stage during each song, while the band played hits such as ‘Welcome to the Family’, ‘Hail to the King’, ‘Buried Alive’, ‘Nightmare’ and ‘Bat Country’ on a stage full of pyrotechnics, including fire and even fireworks!

At the same time Living Colour played a memorable set to close stage 7, including cuts from their 1988 debut album ‘Vivid’ such as  ‘Middle Man’ and ‘Desperate People’ and of course their classic ‘Cult of Personality’, that closed another perfect Soundwave day. Earlier that day we got to interview the 4 legends of ‘Living Colour’, which was a major highlight; not only did we never expect to be chatting with all of them, but the guys were extremely friendly and it was a privilege to speak with a band that has been a major influence on musicians world-wide for several generations now.

We also got to speak with the legendary and always friendly axeman John 5 from Rob Zombie, who was interrupted a couple of times by Phillip Anselmo who was mocking him from a table close to ours. During a really fun chat with Walking Papers’- lead singer Jeff Angells, he explained us the genesis of the band in a hilarious way, while giving away some inside scoops about the Seattle music scene. And what better way to finish our interviews by chatting with Finnish Love-metal frontman Ville Valo from HIM (His Infernal Majesty), who did not care about time limits and went well over our allocated time, even answering some fan questions sent to us via social media.

We would like to take the opportunity to thank Soundwave, its friendly staff and its helpful PR ladies for a flawlessly organized festival that made it a fantastic experience for fans as well as all media present. The fully dedicated people behind  Soundwave are the true unsung heroes of the festival, as they ensure that all goes according to plan. No wonder this is one of the biggest festivals in the world!