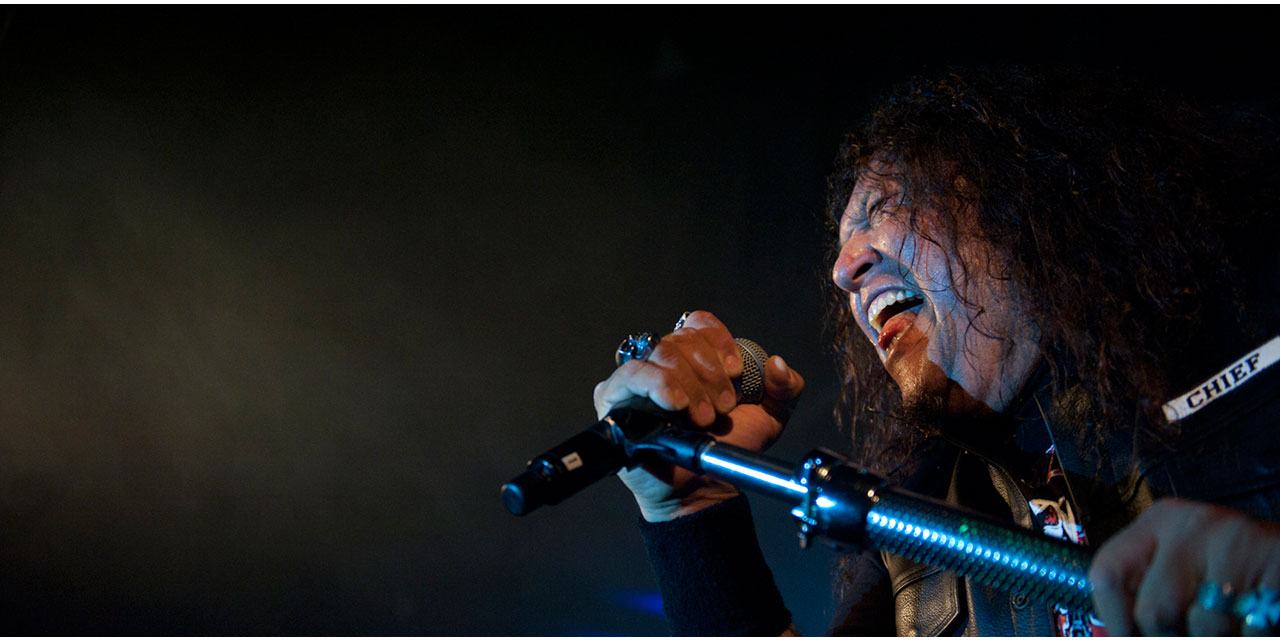 Due to the confusion with Megadeth first kicking Newsted off their sidewave, and Newsted then cancelling all concerts altogether, Testament suddenly found themselves lone headliner of their own sidewave show. A last minute support act was still arranged, with Wollongong Thrash metal band Metreya ready to fill the gap left by Newsted. The brick shithouse of a man standing next to me in the crowd smiled when the guys took to the stage as he assured me this was the best thrash metal band in all of Australia. Although the guy was a bit biased since he turned out to be their roadie, the man was 100% right: Metreya delivers classic 1980’s California Bay Area Thrash Metal with relentless force. It is a privilege seeing a class act like this in a small venue like the Oxford Art Factory, but there would be something very wrong if these guys are not playing huge festivals in Germany within the next two years.

The band has an amazing frontman in Michaek Demov, who brings enough confidence, charisma and most of all grunting power to his act to lift Metreya up to the same level of performance as any of the bands these guys are influenced by. The songs (apparently all written by rhythm guitarist Dieter Jabs) have an insane abundance of killer riffs that draw heavily from Slayer and Sepultura for inspiration. The rhythm section is also ridiculously tight. Metreya‘s secret weapon is lead guitarist Adam Grozdanic, whose melodic virtuoso style can be compared with that of Marty Friedman or that of Alex Skolnick, the guitar wizard who took to the stage later that night. In the heyday of thrash metal there was always the Big Four, but for a long time Testament seemed to be the next band in line to close the gap with them. Unfortunately they never made it that big to be considered part of the Big Five, but that might have changed in recent years; Now that Metallica has become mainstream, Megadeth has gone batshitcrazy, Anthrax has faded away after too many line-up changes and Slayer is no longer what it used to be without Hanneman or Lombardo, Testament might suddenly have become the ultimate Thrash metal band. And that is totally due to the persistence of charismatic frontman Chuck Billy and founder Eric Peterson, who never gave up. No matter how many line-up changes, they just kept on going, and even cancer didn’t stop the living grizzly bear that is Chuck Billy. Currently the band might have its strongest line-up yet; not only are they reunited with guitar virtuoso Alex Skolnick, they also have drum monster Gene Hoglan behind the drumkit for a few years now, while fretless bass wizard Steve Di Giorgio recently re-joined the band. As soon as Testament opened with ‘Rise Up’, the crowd exploded. Although this must have been one of the smallest stages that these thrash legends have ever played on, all band members were clearly having a great time. The setlist turned out to be a mixture of old classics like ‘The Preacher’, ‘Into the Pit’ and ‘Practice What You Preach’ with new hits like ‘More Than Meets the Eye’ and ‘Native Blood’. This last song was one that Billy wrote about his proud native American roots, and he dedicated the song to all indigenous Australians.

There were a few omissions though, with multiple hits not being played; ‘Disciples of the Watch’, ‘Souls of Black’, ‘Electric Crown’, ‘Trial by Fire’ and ‘The Legacy’ are all classics that didn’t make it onto the setlist this night. The encore started with ‘D.N.R. (Do Not Resuscitate)’ and ‘3 Days in Darkness’, two tracks from the ‘Gathering’-album that Peterson in particular is very fond of. After the title track of their second-last album ‘The Formation of Damnation’ the band called it a night after a blazing and energetic performance. Testament is riding high on their second wave and who knows where it may lead to next: the band is planning to record a new album in the near future, and at this Sydney concert there was a cameraman present who is already shooting footage for a huge documentary that will be released in 2016 to commemorate the band’s 30th anniversary.

Check some awesome snaps by Christina Mishell below: