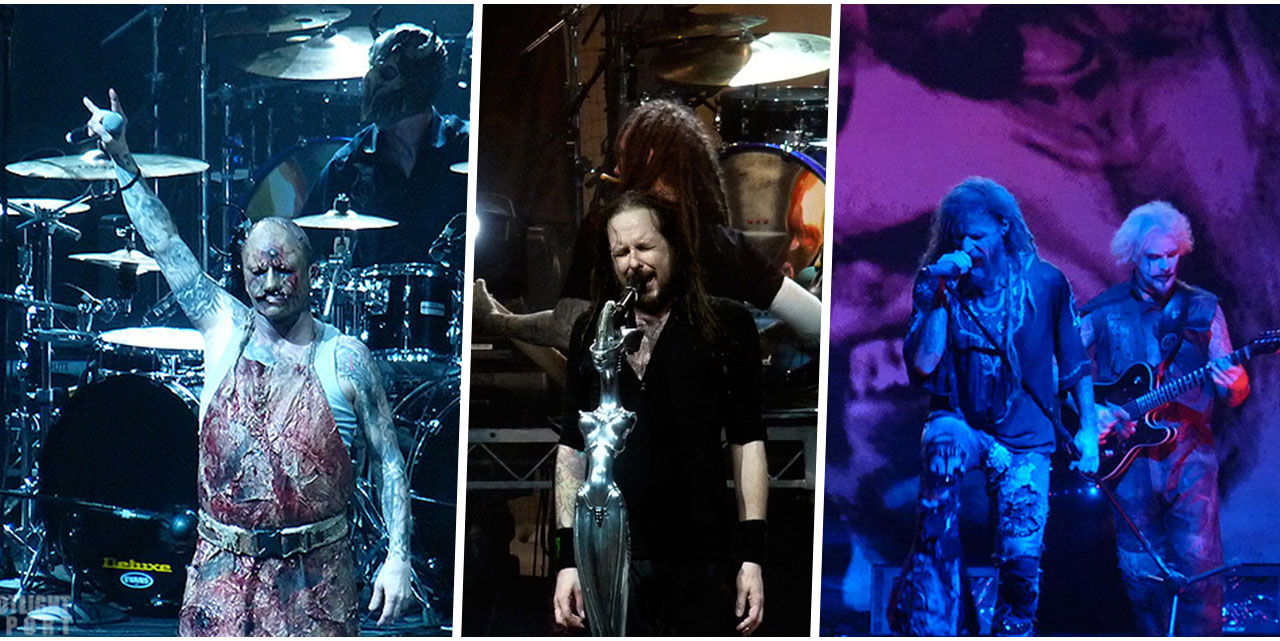 The creatures of the night were awoken on Monday 24th February 2014, as the masked men of Mushroomhead, the Nu-Metal Gods from Korn and the legend of horror heavy metal shows Rob Zombie came out of their graves to play one of the most devastating Soundwave Sidewaves in the festival’s history. Named as “The Night of the Living Dreads”, the sold out show began with Mushroomhead jumping on stage around 19:30, bringing their loud industrial style in a very energetic show, with every masked band member in character. The moshpit went absolutely nuts from the very first minute with tracks like “Sun doesn’t rise” and “We are the Truth”.

With the crowd already exhausted after jumping around for nearly an hour, the lights went off after a quick break and Korn brought their manic madness to the stage, kicking off with “Falling Away From Me”. Jonathan Davis and his men delivered one of their strongest shows ever on Australian soil, with a long 16 song set, including hits like “Got the Life”, “Twist”, “Freak on a leash”, “Blind”, “Clown”, “Somebody Someone” as well as well as some tracks from their new album The Paradigm Shift , such as “Love & Meth” and “Spike my Veins”. The Nu-Metal heroes were loud, energetic and musically impeccable, and treated the crowd to pure old school Korn, with Davis never losing the pitch despite jumping around the stage like a man possessed, and of course he even brought out the bagpipes for “Shoots and ladders”. No wonder the frontman had to get some oxygen between songs to keep going.

Band members Munky, Head, Ray and returning member Fieldy did what they do best during a memorable presentation, with each one of them owning the stage in a show that concluded with the song “Right Now”, that left the crowd wanting more and more! At that stage, many felt the show was over as Korn definitely is a world-class act that could perfectly do a Sidewave show by themselves, but the Soundwave Festival always takes things to the next level, and what better way to do that than to add another world-class act to the bill, and a true legend of heavy metal at that. Mr. Rob Zombie, together with his legendary guitarist John 5, Piggy D and drummer Ginger Fish brought their metal horror show to Sydney in a stage fully decorated with portraits of iconic old-school monsters such as Dracula, the werewolf and King Kong. The heavy horrormeister awakened everyone’s inner monster and of course the moshpit went crazy for the third time in one night, with fans both male and female crowdsurfing throughout the show. Opening tracks “Theme for the Rat Vendor” and  “Dead City Radio And The New Gods of Supertown” immediately got the crowd roaring, and Rob also included two hits of White Zombie in the set with “More Human Than Human” and “Thunder Kiss’65”.The climax of the night that brought the house down came when the band played Metallica’s “Enter Sandman”.

During John 5’s guitar solo, Rob Zombie decided to go for a walk among the crowd, even walking to the balcony pointing a torch to all the undead followers on his path, which was quite a sight to behold.

After a short Encore the band came back on stage to close the night around 23:30 with their anthem “Dragula”, just in time for fans to head back home and catch that last train – of course with a big heavy metal smile on their faces, after a loud, killer and epic show not recommended for the faint of heart.

Enjoy some photos of the show below:

* Fan photos for illustration purposes only. No Commercial gains