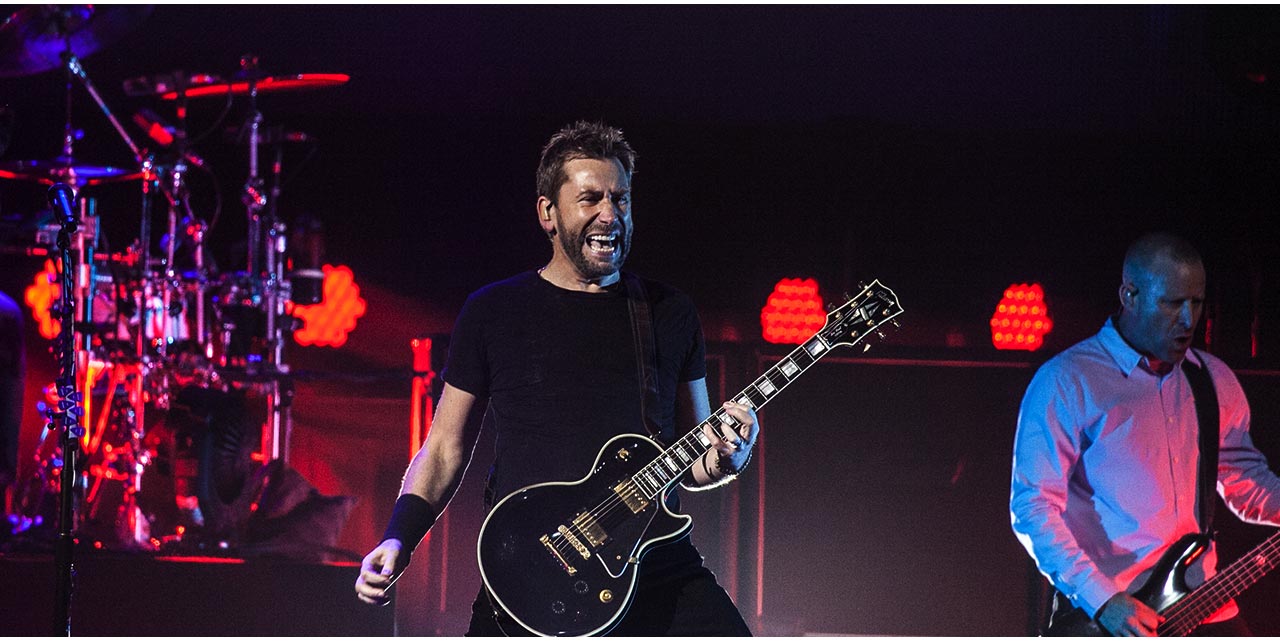 For a band that seemingly gets a lot of haters, Nickelback still seem to buck that trend in the land Down Under. If you’d happened to catch that Deadpool bit where he even goes on to defend one of Canada’s best exports you might get why they still succeed here. So 4 years after their last visit they hit up an almost full Sydney’s Qudos Bank Arena for their Feed The Machine tour.

Openers Bad Wolves are reminiscent of many of the alternative heavy metal rockers you’ve heard before. Meshing frenetic drum and bass with thumping guitars and the occasional death metal screaming vocals. With their set consisting of a quick medley of Queens Of The Stone Age “No One Knows” and System of a Down “Chop Suey” rounding it out with some Pantera.  But they’re best known for their cover of “Zombie” by The Cranberries where they coerced the crowd into lifting up all their phones and lighting up the arena. They also played a couple of their own tracks like “Learn To Live” which managed to draw the attention of some of the early punters. I’ll give props to the band for handing out a whole stack of their guitar picks, drum sticks and set lists as they were exiting the stage too.

There’s nothing quite like the anticipation coursing through you when the lights go dark and the headliner comes out onstage. The crowd erupts in cheers and it was a surprise that they opened the night with the titular track of their latest album and the tour name sake “Feed The Machine”. I was hoping that this was a good indication that they may play a couple more tracks off the newest LP but my hopes were eventually dashed. Throwing “Photograph” so early into the set felt a little awkward and if you’re going to put some photos up on the big screen behind the band, why not make them photos of fans meeting the band?  They then followed this cheesy meme of a song with “Far Away” and “Savin’ Me” making for three fairly slow songs consecutively. With the former getting some lyrics flashing up on the screen behind and an arena crowd sing-a-long. In an attempt to pick the energy back up again, throwing some vintage Silver Side Up material in “Hangnail” then “Something In Your Mouth” and “Figured You Out” which got the crowd surging a little but the energy didn’t quite last as long as we’d hoped. Shifting gears down again with “Someday” with its extended outro and then throwing guitarist Ryan Peake behind a piano for “Lullaby”. And of course as the show is progressing, there are the moments where frontman Chad Kroeger stops for banter, to discuss such things as partying on a Friday night, drinking shoeys or commenting how “having bras thrown up onstage will never get old” after a lovely little leopard print number got tossed up and hung daintily on Mike Kroeger’s microphone stand.

One brief moment of levity was Chad inviting 13 year old Ferris up onstage after calling him out for looking a little bored. It’s alleged his mother dragged him along to the show. Another audience member Cody also got up, and the pair were invited to sing along to “Rockstar”. Only problem is Ferris didn’t know the words, whilst Cody (coincidentally who used to be in a band) nailed every word and even took a moment to wander across one of the wings whilst belting the words. It was both equal parts cringey and awesome, seeing those two onstage, ah the joys of a live show and the unexpected.

The closing of the show with enormous radio hit “How You Remind Me”, whilst “Million Miles An Hour” and “Burn It To The Ground” were in the encore at least meant they ended the show on an edgier and pumped up note. And from a set perspective sure I enjoyed getting to hear most of these songs. But where was “Song On Fire” or “Must Be Nice” or “Silent Majority” off the new record in the set? I was surprised that more of the current album wasn’t played. I probably would’ve enjoyed the show more too, had the sound mix been balanced right. For a good half of the show, there were times it sounded like Chad was singing underwater with how gurgly and drowned out his mic was.

Often times you hear the saying “I like their old stuff better than their new stuff”. Experimentation and progression in music can be a negative affliction and impact your audience, losing or gaining fans depending on how favourably an album tracks. And for all Nickelback’s progressing forward with a softer approach on their albums over time, they have always tried to retain some of their hard rock roots. I have seen them almost every time they have toured Australia, so I know they can deliver a well balanced setlist of edgier harder faster and more energetic tunes with a sprinkling of their radio hit rock power ballads to slow things down a little.

Suffice to say that tonight’s performance, with its set consisting of slower songs bundled together seemed to have a more overall mellow feel. Opting for a more toned down production also seemed like a change of pace. If you’d ever seen any of their earlier tours, pyrotechnics, moving drum risers and t-shirt cannons were a highlight. This time around replaced by strobe lights, a large screen behind them projecting lyrics or other video footage, and their own roadie barman Bradley to deliver them jagermeister shots. As a long term fan I walked away feeling somewhat disappointed by the evening’s show. Here’s hoping that when they release their next record and tour again they’ll opt for a show befitting of their hard rock heritage but also able to embrace their new found power rock ballad softness.