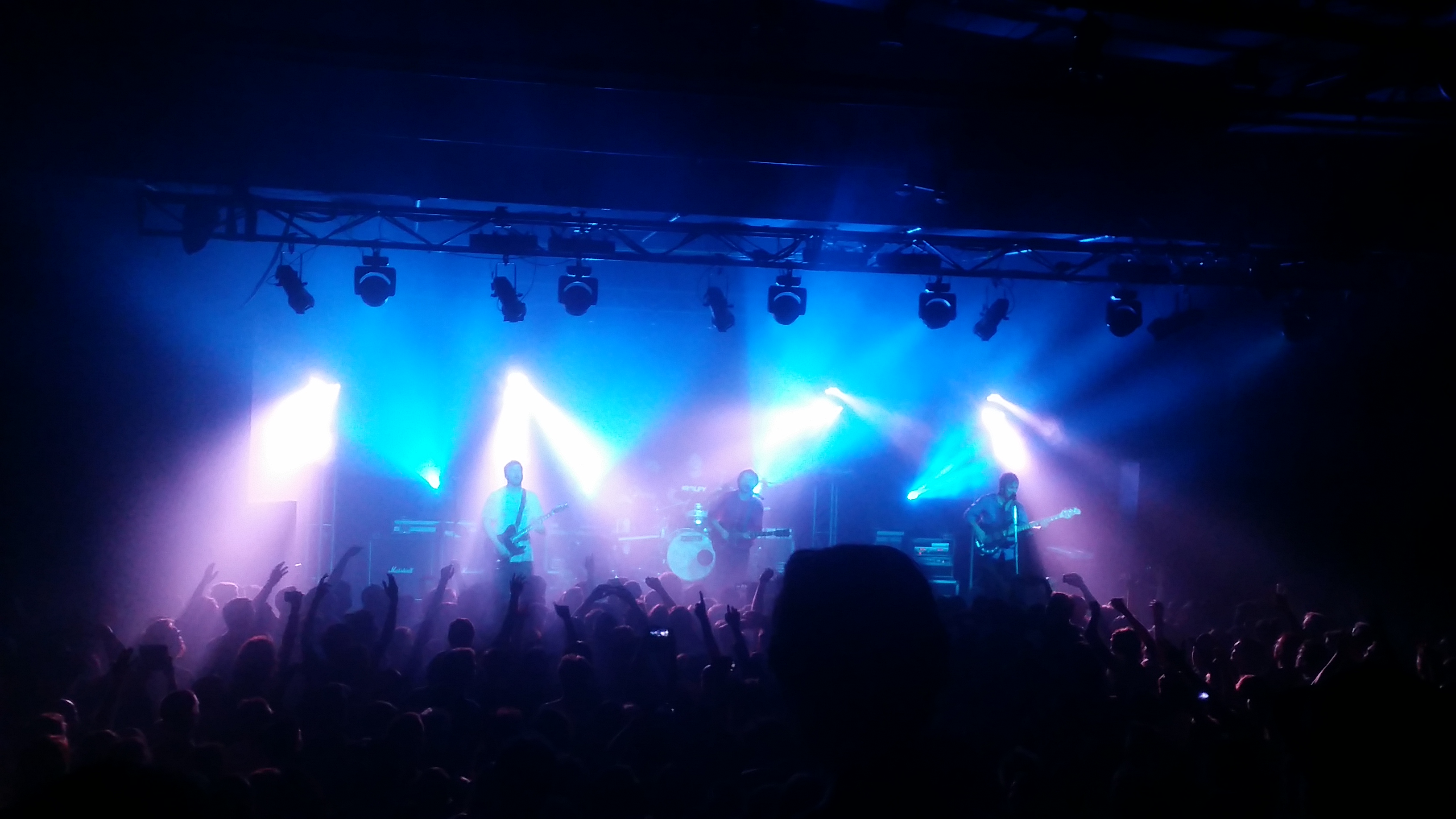 Hertfordshire-based band Enter Shikari were always on the top of my list to see live. I was never one of those dedicated fans that listened to their music religiously, but to come across their fourth record The Mindsweep last year, I was captivated by their use of electronic, dubstep and strong cases of post-hardcore elements in their music. To say that they are one of the best live-performing bands you can ever see in your life is a total understatement. Their ability to showcase such authenticity in their live shows takes a lot of energy and courage to be the best that you can be, and that’s all what the four-piece had done last night at their show in Sydney’s The Metro Theatre.

Since coming to Australia last year a few months after the release of The Mindsweep, punters had the opportunity to bask in the glory of tunes that really honed down to what Enter Shikari valued as a band; it wasn’t because they were there for the sake of it, or for the money that was going in their bank accounts, it was for the sole purpose of making hundreds of people in an intimate venue feel something. Gauging from just one live show, Enter Shikari push-and-pull the audience into something extraordinary, and there’s no way to describe how they are as performers because what they showcased last night was phenomenal. From the strobe lights to the interactive elements of the live show, it was everything you’d hoped to be and more.

Kicking off the night, Sydney’s Stories came on stage with a humbling presence, showcasing their heavy tunes with all their might, considering how it was one of their last shows before going on an indefinite hiatus. For most of the crowd, people seemed to be disinterested in their set, with some nodding along to their music.

Coming all the way from the UK, came on Buckinghamshire rap metal band Hacktivisit. Putting on a brilliant performance while also giving Jay Z and Kanye West‘s “N**as in Paris” some justice in their own thrashing cover, they completely outdone themselves right there on stage, interacting with the crowd while also encompassing such magnificent energy. Even though the circle pits weren’t as wild, Hacktivist gave out the goods last night.

With the crowd already looking like swarming bees left, right and centre, Enter Shikari’s introduction was slow but cleverly built-up a lot of anticipation from concertgoers. With a voiceover that felt like we were on a different planet in their Reprise, frontman Rou Reynolds and his band mates hit up the stage with glowing faces, ready to undertake what could be one of the best shows done in Sydney. Strobe lights going back and forth, I empathised with the photographers struggling to take perfect snap shots of the night, with gleaming colours of blue, red and purple, bouncing away so rapidly, most people could easily lose their eyeballs in a second from staring too long.

It reminded me of that episode where the Simpsons took a trip to Japan being exposed to the “Battling Seizure Robots” TV show, falling down and rolling around the floor (if you don’t know what I’m talking about, watch HERE). I pictured that TV moment so vividly while I was watching Enter Shikari blast through “Solidarity,” with some punters giving any opportunity to mosh and crowd surf their way through the sea of people, flinging their bodies towards security and just having a good time. It didn’t matter if they were sweaty, breathless and smelling of BO – they were hooked on a feeling that Enter Shikari gave them the opportunity to feel exhilarated and invincible for just one night.

“Enter Shikari are like Red Bull; they are the wings that lift your spirits and make you feel more alive than anything.”

Though Enter Shikari came to Australia to play their last round of songs from The Mindsweep album cycle, their setlist had a balance of old favourites too, so it was carefully curated to fit the taste of the crowd. Being exposed to earth-shattering tunes like “Mothership” and “Sorry, You’re Not A Winner” , 14-year old me felt a sense of nostalgia, making me realise how truly underrated this four-piece was in the heavy scene. With their perfect mixture of different genres, Enter Shikari showed a burning passion that brought together an ethereal vibe to The Metro Theatre, and it really made me re-think how we need more bands to be interactive with their audience and get them involved in a meaningful way.

Rou climbed over the speakers and eventually had to struggle in taking his mic down from the ceiling, and it was insane to think how much we spend our lives not appreciating the little imperfections that make live shows so memorable. The way he put himself out there and just did his best to channel the energies felt in the room, and turning that into a performance of a lifetime for people. I mean, what else is there to live for? Enter Shikari are like Red Bull; they are the wings that lift your spirits and make you feel more alive than anything.

Ending with a magnetic rush of euphoria, the four-piece managed to do a sick remix of “Anaesthetist” while performing closer, “The Appeal & Mindsweep II”, putting the cherry on top by blazing through and just showing killer musicianship in their final moments of their Sydney show. With bodies still having the energy to mosh and form some of the most wild circle pits you could ever see, the four-piece did not disappoint in their delivery of music in the flesh. I’m so glad my kidneys could hold it together when I refused to go to the bathroom during their set; they’re the type of band worth holding your pee for.

Be sure to check out Enter Shikari on the remaining dates below!