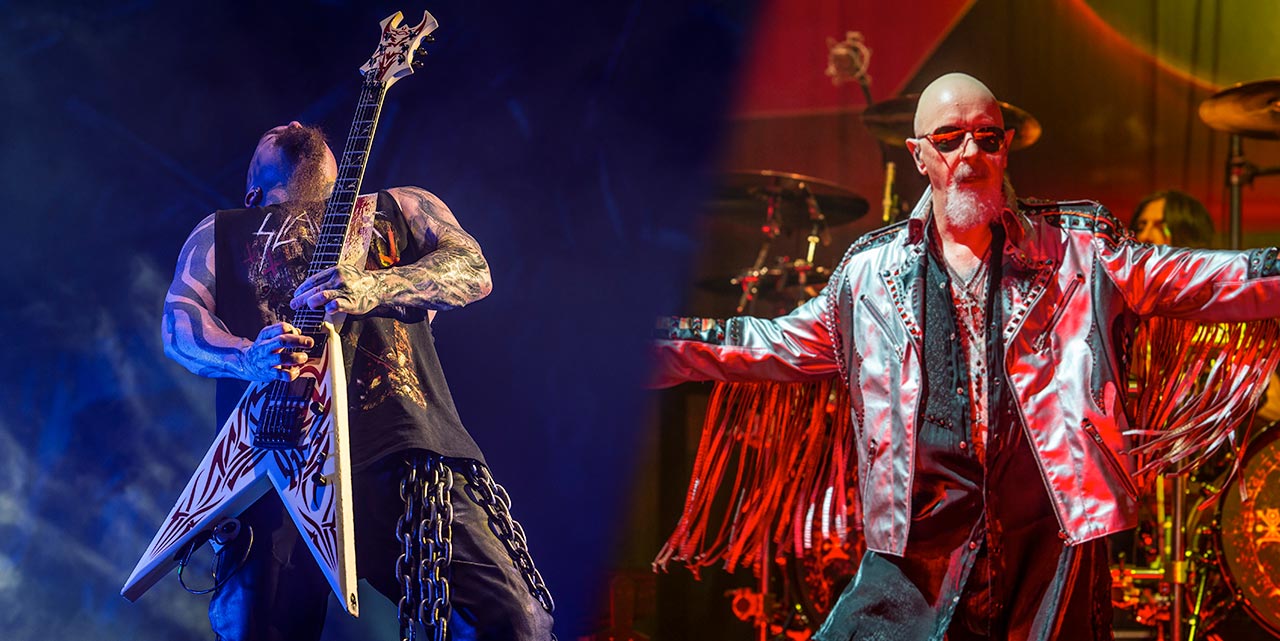 On Saturday 9 March 2019, Parramatta Park held some of the biggest names in rock and metal in its small suburb with the first Download festival gracing NSW. Despite the threats of rain, and humidity to boot, the punters of Sydney weren’t letting anything get in their way to have a rockin’ good day! The atmosphere was calm yet buzzing. It was clear we were in for a massive show!

An explosive start on the main stages were Western Australian Prog Rock outfit; Voyager. The passion was there, the drive was there, the excitement of the band was almost infectious; “Were here! It’s Download! Yes!”. The most entrancing thing about Voyager’s performance was not only front man; Daniel Estril – with a killer red key tar and his luscious mane, guitarist Simone Dow stole the show. Ms Dow has one of the meanest, brutal metal guitar faces I’ve seen in a long time… it was refreshing to see! Voyager ended their set with their new track BrightStar, which was a clear fan favourite. On the other side of the venue, the Avalanche Stage was showing the main stages where it was at! A small but humble crowd for California rockers New Year’s Day, who were made their Sydney debut yesterday! Front woman Ash Costello took a moment to tell the crowd that she was “happy to be representing the women of rock” before diving in to hit track Defame Me. Having their loyal fans in the palm of her hand, Costello insisted they sing track Epidemic for her.

Catching the last of Redhook’s dominating set provided something of a common theme with many bands; “Fuck the nanny state! Don’t kill live music” was the unanimous voice of the festival.

Tassie Boys Luca Brasi seemed to have a few sound issues with the vocals of Tyler Richardson seeming a tad muddy, but that didn’t stop their loyal fans still screaming all the words to hits such as Say It Back, Let It Slip, Anything Near Conviction and even interludes of “woah’s” in Aeroplane. Luca Brasi are definitely one of the most wholesome bands in Australia at the moment, with their chemistry on stage and even a nice moment from Richardson giving his Dad; who flew up from Tasmania that morning, a little shout out before the conclusion of the set. It was a nice moment as a fan to experience.

As the afternoon started to set in, the rains were welcomed to cool down the punters, but cooling down was something opposite of Fever 333’s set. Energy was not lacking from this rap core group, with vocalist Jason Butler turning the stage into an almost jungle gym of activities. Part of the drum set was flounced around the stage, microphones were thrown, cymbal’s were crashed, along with Butler fearlessly climbing the speakers on stage, then without batting an eyelid jumping to the ground with flips in excess.

Across on the Dogtooth stage, punk rockers Frenzal Rhomb started their set with an ode to Ozzy Osbourne with a Crazy Train cover to pump up the massive crowd that seemed to flock over to see these Aussie legends. Hits such as Bird Attack, Russell Crowes Band, 5000 Cigarettes along with an ode to “Every person who uses the internet” Mummy Doesn’t Know That You’re a Nazi. What makes Frenzal Rhomb a fan favourite is that they have become such a well-rounded established band, you can see them not take themselves too seriously, which always makes for an enjoyable show.

Airbourne hit the Black stage, and they did what they do best: Rock hard and engage the crowd with their unique, infectious energy, with frontman Joel O’Keeffe running from one side to another of the stage, and as usual, getting off stage to join the crowd during Runnin’ Wild. Airbourneended their set with Live it up, leaving the crowd asking for more and a prove of that was some punters around commenting to each other “It’s my first time seeing this band live, I’d no expectations, but now I’m an absolute fan…what a show full of energy!” – Good on ya’ Airbourne Behemoth are the Blackened Death Metal band that was on the top of everyone’s list, and with the performance they gave it was easy to see why. Pyrotechnics galore with fire cannons and smoke along with their known theatrics, they effortlessly gave their all through tracks such as Diamos, Conquor All and Blow Your Trumpet Gabriel.

Anthrax hit the stage right after paying tribute to former Pantera’s drummer Vinnie Paul by using the intro of Cowboys from hell, before jumping on stage. However, during their set, the trash metal legends seemed less impressed with what the crowd was giving them; “Some of you guys aren’t having as much fun as you could be, Sydney we are all gonna move okay?” along with the question booming through the venue “Do you love thrash metal?!” With that little push the crowd went wild for tracks such as Caught In a Mosh, Be All, End All, Indians as well as a Joe Jackson cover of Got The Time. Anthrax showed why they are a legendary band for a reason.

Brisbane boys The Amity Affliction are well affiliated with the festival scene and very rarely put on a bad show, with their abundance of dedicated fans screaming at the top of their lungs, with a rowdy mosh to accompany. Playing all their hits such as Shine On, Let The Ocean Take Me, This Could Be Heart Break, the cherry on top of the set list was Pittsburgh which proved an emotive and passionate performance.

The level of talent on the main stages was pushed to a higher level with seasoned rockers Rise Against bringing the expectation bar to a high. Crowd inclusion was prominent with singer Tim McIlrath jumping and crowd surfing at any chance he could get to be close to his adoring fans. Song after song Rise Against proved that the difference between live performances and recordings really don’t need to be different, with their natural talent shining through with tracks such as Prayer of the Refugee, Drones, The Good Left Undone, along with covers of Black Flag, Misfits and Black Sabbath.

Back to the Avalanche Stage Aussie Deathcore Sweethearts Thy Art is Murder were as brutal as ever. Creating an expected ruckus during their set with probably the biggest circle pit of the day, surrounding the audio booth. Horns were high in the air and blast beats rumbling through the crowd, exceptional performances of Reign Of Darkness, Holy War as well as a last few tracks which vocalist CJ McMahon stated “if you don’t like them, then suck me off C**t”

In our interview with Halestorm guitarist Joe Hottinger, he said “I think when people who haven’t seen us before hear Lzzy (Hale) screaming out across the crowd, people will get it” and as was spoken, became true. Lzzy Hale is one of the most powerful vocalists in Metal. The roar, the fire and the talent of not only Lzzy but Halestorm as a whole makes it plain to see why they have such a strong following. Absolutely slaying each track on their set list such as Black Vultures, Mayhem, Freak like Me and Grammy Nominated Uncomfortable. I think Halestorm will have quite a few new fans to take back home with them. A stellar performance to say the least.

Back to the main stages, it was time for some good old school grunge, as Alice in Chains returned to Australia to deliver a solid set full of hits, including Would? Man in the Box, and Down in a Hole, among others. As expected, former member Jerry Cantrell was the star of the show, getting ovations with every guitar solo during the band’s set. Sore legs did not stopped metal fans to pack the Black stage to welcome “The Metal Gods” of Judas Priest back to Sydney, this time without their legendary guitarist Glenn Tipton, due to Parkinson illness. However, and as expected that did not affected the bands performance at all, as “The priest” unleashed the moshpit with new songs from their latest (and truly epic) album Firepower,  and old tracks like You’ve Got Another Thing Comin’. Frontman Rob Halford, showed the world that you are never too old to rock, as his voice sounded spot on and full of electric energy, while his band members gave a masterclass of what a true classic heavy metal band should sound like, with guitarist Richie Faulkner (who replaced KK Downing in 2011) having a show of its own interacting with the crowd, and throwing tons of guitar picks along the set.

At one stage, the band made everyone feel like their set was about to be finished with Halford entering the stage on his bike to perform Hell Bent for Leather and bidding farewell afterwards. However, drummer Scott Travis, remained on stage as the cover of the album Painkiller was displayed on stage saying: “We have time for one more”, but it was not one, but three songs, as Judas Priest crowned probably the best performance of the day with Painkiller, Electric Eye and of course, Breaking the Law, even moving some die-hard fans to tears…Hail Hail to the The Defenders of Faith! Last big performance of the night was for a band currently touring the world for the last time, as trash metal legends Slayer took over the headlining spot after Ozzy’s cancellation due to illness, and obviously they did not disappoint. There is something special about every Slayer show, as they are capable to bring people from everywhere together, no matter where you look at a Slayer mosh-pit you see black shirts from every band and genre, from Paramore, Blink 182, Pearl Jam to Death and Cannibal Corpse and so on. The mighty Slayer don’t need to jump like crazy on stage or put make-up on, for them is all about delivering all-time classics to their fans, and shredding every guitar, bass and drum stick during their show. Frontman Tom Araya, Axeman Kerry King, drummer Paul Bostaph and Bass player Gary “Kill The Kardashians” Holt are a tour de force together, as they performed 19 songs for over 90 minutes, including tracks like Blood Red, War Ensemble, When the Stillness Comes, Raining Blood, ending their set with their anthem Angel of Death, in a show that truly felt like a celebration of their music – Metal Horns to the sky, because Slayer‘s legacy will always remain!

Overall, Download Sydney was a success, with more than 20,000 fans enjoying a fun day full of rock and mateship, that sends a strong message to the the local government as no matter what Live Music will Never Die!