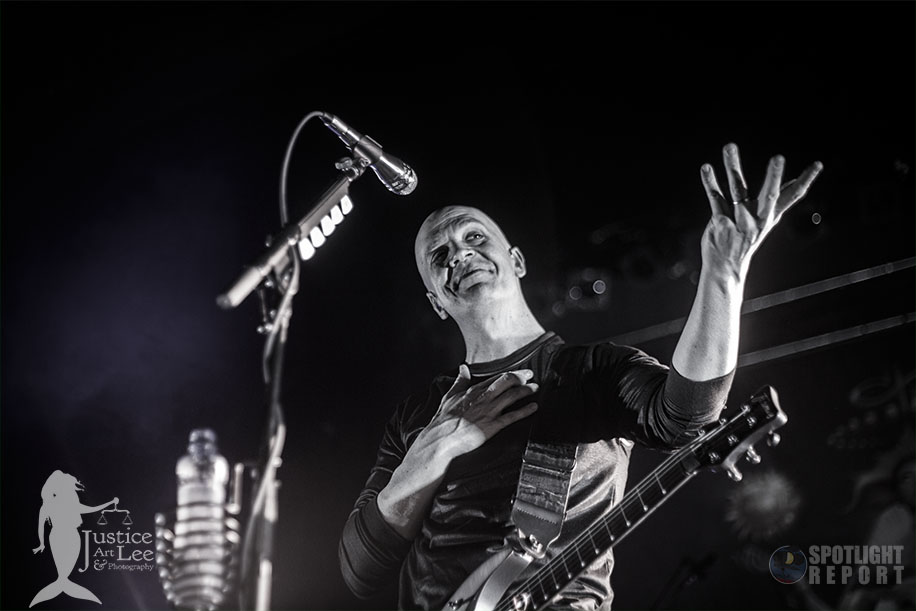 The unlikely pairing of Devin Townsend and his mind has created some of the most wondrous and imaginative discographies in rock history. The anticipation of seeing these creations performed live was a familiar feeling that was buzzing throughout Sydney’s Enmore Theatre on Monday night, whilst Ziltoids and girls were waiting to see the Devin Townsend Project.

Sydney’s own Sleepmakeswaves had the support slot on the bill, but with their performance it isn’t a surprise these guys absolutely fitted perfectly into this show. As always Sleepmakeswaves played a raw emotive set of their powerful instrumental compositions, including To You They Are The Birds, To Me They Are The Voices of The Forest and hit single from their latest album Madeofbreathonly; Tundra. I am so excited to see where these guys will go in such a progressive music scene. The only way is up for Sleepmakeswaves!

A very short wait for the fans as DTP entered the stage in all their bountiful glory with admiration pouring from the fans, who rejoiced as they played their track, funnily enough called Rejoice. The power, passion and love that this band puts into their music is something that I think many hope to strive for with something, anything in their life.

Song after song Devin had this mesmerising connection with the crowd, making eye contact, singing to people, saying thank you. The whole concert we were encapsulated in a bubble of emotion through the set list comprised from most albums with tracks including Stormbending, Hyperdrive, Where We Belong, Deadhead, March of the Poozers (which included a smoke machine which seemed to entertain Devin quite a bit), and Kingdom, all before the encore. Of course there was also an appearance from the traditional Ziltoid puppet in the crowd, bringing laughs all over the venue.

Devin admitted his voice was not up to scratch because of “all the talking and book reading” he did earlier in the day at Utopia records exclusive signing. But we forgave him, because its Devy, and as he still managed to provide an overly exceptional performance. Guitarist Dave Young was absolutely captivating to watch as his head and luscious beard moved with such smoothness with the music.

“We will be back in 2 minutes okay!?” Devin said to the punters eager to hear more. Not even 30 seconds later Mr Townsend comes back with an acoustic guitar evoking a memorable performance with the crowd singing along to Ih-Ah! Where jokingly his falsetto’s “still worked”. The night ended with a jaw dropping performance of Bastard, and Higher.  Seeing Bastard live in a rendition close to the performance at the Royal Albert Hall was a dream come true.

Not everyone might understand the music of DTP, or understand Devin as a person, but if you love music you can at least appreciate what this band does and how this band can make you feel as it is something beyond spectacular. I would recommend to anyone to check out DTP at least once in their lifetime. I don’t think you will regret it. Especially the appreciation and love that they give to their fans, even coming out after the show to thank them, shaking everyone’s hand.

That’s a real musician. That is how you end an amazing show. Hevy Devy still has it.

Check out our snaps below!

Catch DTP on the rest of their tour