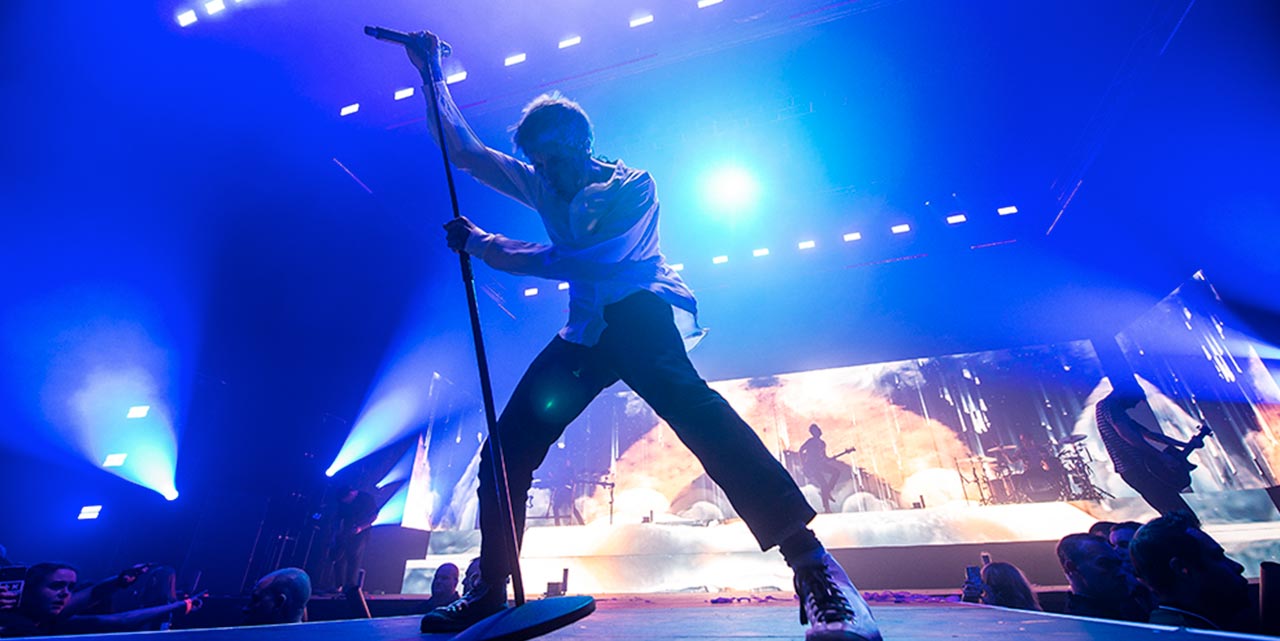 What an evening! Who ever organised this show knew exactly how to build up an audience! They put together a line up of such good bands that if you bought your tickets solely for Bring me The Horizon you were in for a treat as the rest wouldn’t be far away from your taste.

Nights like this are always a good opportunity to discover new bands, or simply warm up for the headliner. I’m saying this because I notice how the crowd were growing as the night went on. Those who got to the show early got to eat all the pieces of the musical pie. You could feel the energy building from Trophy Eyes taking to the stage, handing over to the formidable Frank Carter and the Rattlesnakes as the stadium began to fill. You Me At Six got the crowd going before headliners Bring me The Horizon.

Trophy Eyes hit the stage at 6:30 and to be honest, they played really well. It always hard being the first band and playing in a big venue with only about a third of the crowd. Whatever, the size of the crowd, they showed their appreciation and the band gave it all.

After that Frank Carter and the Rattlesnakes hit the stage with a clear idea: “Play as it was the last time of their lives” Frank is an unique frontman and he knows how to do it. Dancing, jumping, encouraging the crowd to be an active part of the show etc. etc. You name it! One hit after another, non stop. After giving thanks to everybody bands, promoters, workers of the venue, security team, fans the band played the last two songs. Before finishing, Franks revealed the band will be back in Australia with their own tour in December which is a really good news.

You Me At Six
It was my first time seeing this band, without any reference and to be honest, without knowing anything about them and I really enjoyed their set. The metal world is changing and right now you can find solid bands with new sounds engaging younger audiences, that’s a fact! When they jumped on the stage the Qudos Bank Arena it was almost packed and not only because they were the band right before the headliner. Everybody were singing along and showing them love and the band did exactly the same back. After a half hour show that seemed to go so quickly, we were headline ready – Bring me The Horizon!

Bring me The Horizon are huge right now and talking about discovering younger audiences – these guys appeal to everyone. They have an army of new-school fans and taking a look around for every classic metal head you’ll find 20 teenage newcomers, which is great!

Bring me The Horizon is definitely a band to see live. The light show is not a joke – massive screens, lights, pyro, CO2, smoke… you name it, they got it. The show is a perfect combination between the band playing and a perfect theatrical design where something is happening every second. The best part of a younger crowd is that they die hard with every song, and that makes the show even better.

And then after one and a half hours of classics and new material and enough energy for a circle pit… we reached our musical crescendo, took a bow and called it a night.