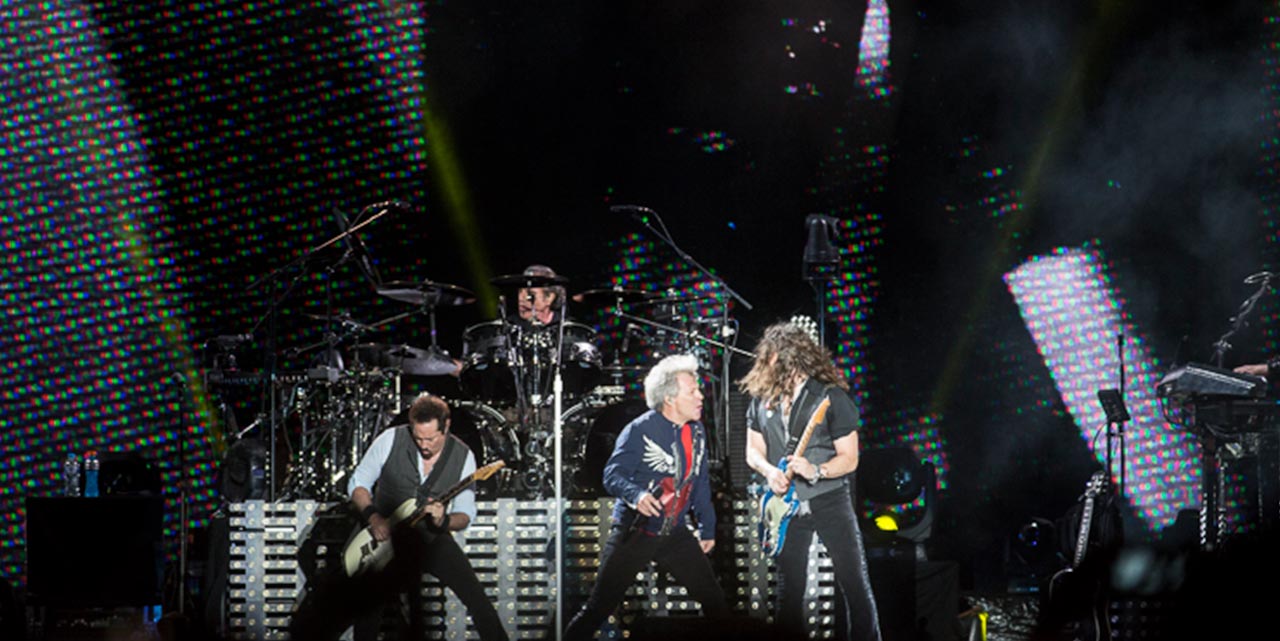 Seminal 80’s rockers, Bon Jovi, were back in Sydney on Saturday night playing the ANZ Stadium with support by Australian favourites, Birds of Tokyo.

It was 31 years ago that Bon Jovi first started visiting Australian shores and with all great (dare I say, ageing) bands, there’s always the fear that this could be the last opportunity to watch them in action. And while this visit was to support their latest album, This House is Not for Sale, some may have worried going into the show that it would focus solely on the new album with a smattering of the band’s greatest hits. Thankfully, those people were wrong…dead wrong.

In true Bon Jovi style, the frontman took centre stage from the start by making his way from the back of the stadium through the crowd – stopping for the occasional high-five  and a selfie, before joining the rest of the New Jersey rock legends on stage to rapturous applause.

After briefly enjoying the crowd reception, they kicked into Shot Through the Heart – clearly something of a welcome surprise to the crowd. But from the off, there were signs that the ravages of time had begun to take its toll on the 56 year old lead singer early. While his hair remains lush (albeit grey) his moves were often akin to a dad having a boogie than the rockers we remember from ’86’s Living on a Prayer. The difference, though, is your dad probably couldn’t do that for near on three hours at his age.

Then there was the voice. At times it seemed strained trying to hit the high notes with the lead singer compensating by changing the arrangement and cutting words mid-way through, seemingly throwing the rest of the band off time.

It was an ominous start that left a question mark over the whole evening. But for anyone that had questions, they were quickly answered as the band rolled through Raise Your Hands, Lost Highway and Who Said You Can’t Go Home – with much better vocals. The latter song it seemed, was also a poignant nod to Jon Bon Jovi’s own feelings about Sydney as he elaborated after the song; “I want to thank you Sydney. Like a good home needs a foundation, this place built the foundation of who we are today. And I want to thank you for your kindness.”

He followed this with the title track of the new album of the same name; This House is Not for Sale – one that seems to be aimed at detractors saying they don’t have it anymore. All were permeated with the trademark Jon Bon Jovi likeability, charisma, energy and ability to connect with the crowd that few other artists can claim.

The band swiftly moved on to Rollercoaster also from the new album,  easily the best (and most surprising) of the new tracks, as when you listen to the album its impact is limited, but played live in a stadium the song really comes to life.

The rest of the set is an even mixture of old and new tracks that had the crowd singing and dancing along. The finale of course, Living on a Prayer, easily the bands most recognisable track to date. Not a single person was seated during the performance and any vocal abnormalities were probably the result of 80,000 people singing to the band and putting them off key!

With that, the band signed off and after a brief pause came out for the first of three encores (that included five songs) capping off an impressive set list and finishing with the frontman telling the crowd; “I just want to thank you so much for your kindness and friendship over the years. I love coming here…and I look forward to seeing you again.”

And with that, a band that defined the ‘80’s and has continued to enjoy a success few others can claim in the decades to follow, bid farewell to the Sydney crowd in attendance. Whatever the shortcomings of the show may have been, fleeting as they were, they were not enough to dampen the evening, which was brimming with nostalgia and the excitement of experiencing anthemic songs in a fitting stadium environment with 80,000 other fans.

We’ll leave you with this – a few years ago we saw the Eagles. They were older and arguably past their best but we still tell people that we have seen the Eagles, and no one can take that away from us. Now, we can always say ‘we’ve seen Bon Jovi’ and watch the look of jealousy on the face of all those people – who understand we have witnessed something special.

Enjoy some snaps of the show below: