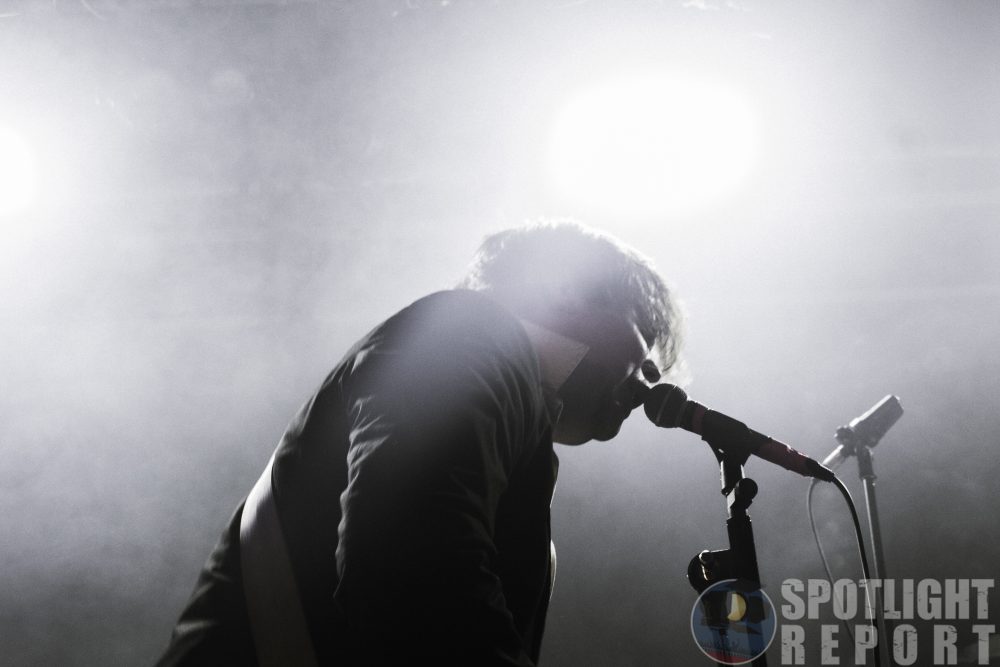 To say that these Atlanta natives are kinetic performers is a profound understatement. They take to the stage in suit jackets so neatly pressed that a fellow punter remarks on their surprising primness. By the third number, Scogin is a dishevelled, perspiring dervish – eyes ablaze with demonic fury and wielding his guitar with wild abandon. Throughout the show, he plays frenetically, leaping into the air, roaring into the mic with unbridled fervour, and even crowd surfing at one point. Although keenly aware of his audience – he’s a brilliant, energetic, and interactive frontman – Scogin appears to be veritably possessed by the music, such is his focus and intensity.

Facing each other, so that we observe them in profile for much of the show, the pair are in perfect synchronicity: a well-oiled sonic mechanism of formidable force and flair. McClellan, a more understated presence, plays with dynamism and precision, watching for Scogin’s cues and never faltering throughout the muscular set. Working their way through songs from 2 Parts Viper, as well as crowd pleasers from 2014’s In Humor and Sadness, the guys ensure that fans well and truly get their money’s worth tonight. Highlights include impassioned performances of Whether Terrified or Unafraid, This Life Is Old, New, Borrowed and Blue, Track 8 O, Track 7 N, Track 4 R and Track 1 R. Their sound, which has variously been described as noise rock, punk, and blues-hardcore, is reminiscent of Nirvana, The Pixies, and the Black Keys: raucous vocals, a grunge sensibility, and miles of distortion.

Scogin explains that the title 2 Parts Viper came to him in a dream when he was last in our city, which is met by the crowd’s hearty approval. When pushed for details about the dream, he deadpans, ‘I don’t have to explain my art to you.’ The rowdy, yet remarkably well-behaved, audience members shout requests (Songs 2 and 7 are popular). ‘Just keep yelling them out,’ Scogin says. ‘We’ll probably play one or two of ‘em for sure.’ There’s energetic moshing and crowd surfing – it’s a spirited event, especially for a Wednesday night.  Following a lively rendition of the old Surfaris classic Wipe Out, Scogin jokes, ‘I don’t know what that track was, but it was free.’

This is ‘68’s final Australian show and also marks the end of a long international tour cycle. Scogin graciously thanks the crowd for showing up and supporting live music. When they’re done, they’re done. The show suddenly concludes on the final note of Track 1, and, though appreciative, the crowd offers no resistance. After watching a show that was like organised chaos itself, it seemed only fitting that the boisterous crowd should obediently disperse. If you have an opportunity to see ’68 next time they’re in town, see them. See them, see them, SEE them. You will not be disappointed.