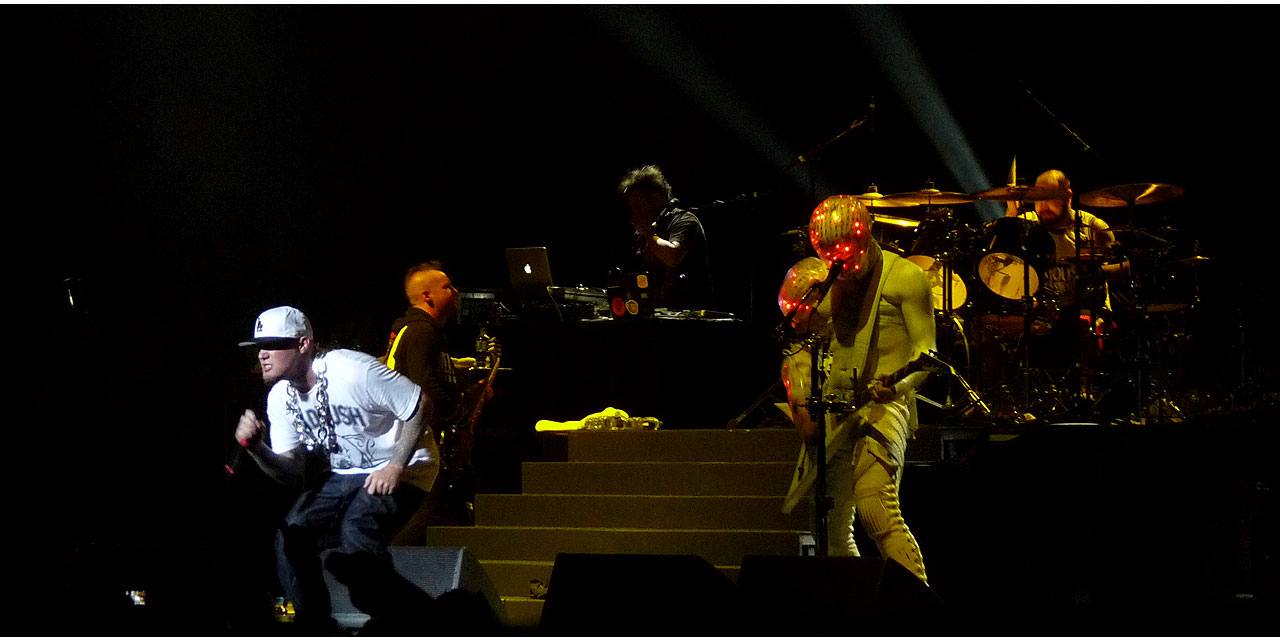 On Saturday October 26, Nu-Metal was the official soundtrack at Sydney’s Entertainment Centre, as Limp Bizkit (without DJ Lethal), took over the place as part of their first ever Australian headline tour. The night started around 20:00 with DJ Franko (who has taken Lethal’s place on this tour as the band and the iconic DJ are currently dealing with some personal issues). Franko played some metal tracks, including Metallica, Korn and Slipknot, in order to warm up the anxious crowd displaying a sea of red caps in honour of Fred Durst.

After a short break, at around 21:15, the Nu-Metal madness began when Fred Durst, John Otto, Sam Rivers and the amazing Wes Borland hit the stage. Performing the song Thieves from Ministry, followed by Rollin’ (Air Raid Vehicle), the band brought the energy of the mosh pit back to Sydney, full-force. A talkative and funny Fred Durst proved his ability as frontman, becoming a true MC, interacting with the crowd, and even making spontaneous jokes during the set (including references to a Mars Bar somebody threw at him). Perhaps his funniest gag of the night involved a reference to George Michael before launching into Faith. Durst also gained the crowd’s respect when he dedicated all shows of the tour to the memory of Jessica Michalik who sadly passed away during the Limp Bizkit set at Big Day Out 2001. During the show, Durst also congratulated the crowd for taking care of each other, observing how crowd members helped their neighbours in the moshpit whenever they hit the floor. Guitarist Wes Borland, on the other hand, gave his own show, thanks to an impressive white costume, complete with flashing lights, which made him look like a true white demon of the guitar. Meanwhile, bass player Sam Rivers treated the crowd with a bass illuminated with red lighting, and drummer John Otto’s energy reminded us why he’s remained in the band despite previous issues.

Limp Bizkit did not leave anyone down. The show was solid from beginning to end, with all the fan favourites, such as Nookie, My Generation, I’m Broke, My Way, Take a Look Around and even a cover of Rage Against The Machine‘s Killing in the Name included on the set list. The night closed with Break Stuff and one of the biggest mosh pit circles we have seen in a long time.

Here enjoy some *pictures of the show below:

*Fan pictures for illustration purposes only. No commercial gains.