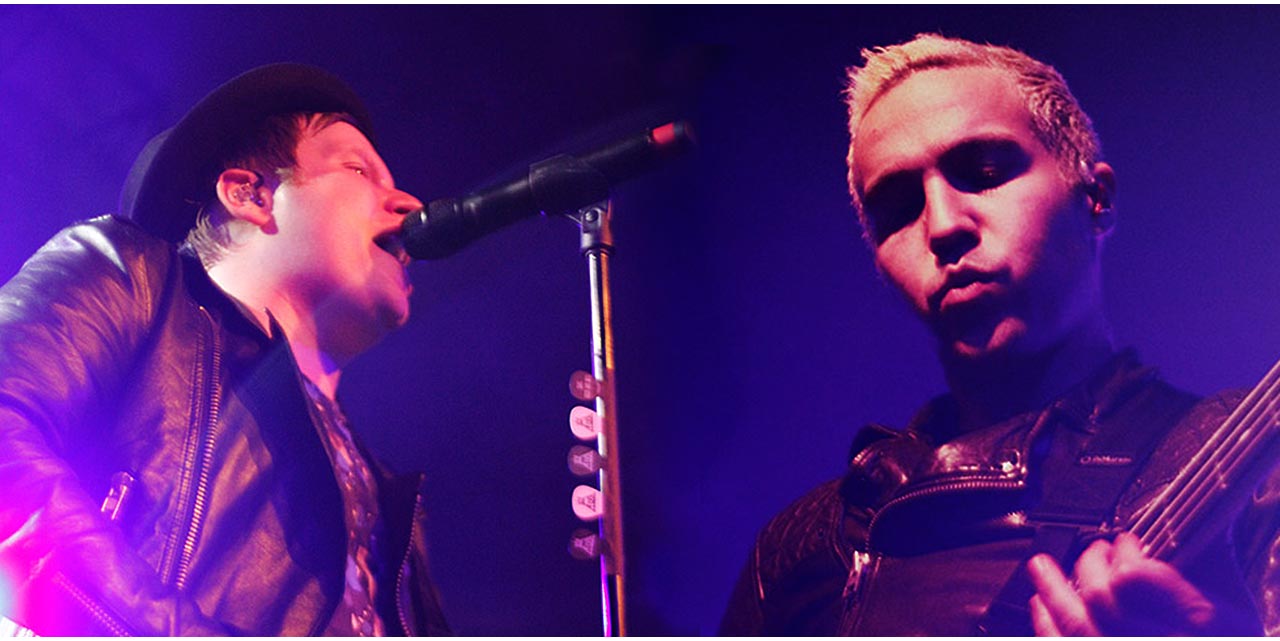 Having seen Fall Out Boy for the second time since their epic return of 2013, it was interesting to see the diversity of the audience that night. It was a mixed bag of old and new fans, with the band having just released their sixth studio album, American Beauty/American Psycho. Panning through the “circle of trust” at the Roundhouse, it was clear that people were mainly there for Fall Out Boy – however, there was no excuse to miss out on the first two acts of the sidewave show, wondering what both Emily’s Army and Twin Atlantic brought to the table. The boys of Emily’s Army (now known as Swimmers) engaged the audience with sheer enthusiasm on their set. Even though the crowd seemed disinterested towards their performance, they didn’t lose the momentum of energy needed to keep the ball up in the air as they played through each track. Brothers, Cole and Max Becker managed to pull off their zany coloured hairdos, with the lights bouncing colours of green and blue on the stage. Joey Armstrong, drummer of the band seemed to enjoy himself even if he was settled behind the limelight. With their genre being described as “Beach Pop” it was a mixture of fun and rhythmic tunes, with added vibrancy of guitar chords here and there and fast-paced drum energy. Despite the stale attitude of the audience, a minority of youngsters seemed to enjoy their presence and it was clear that the band were appreciative of this fact. Making a quirky entrance to the stage, the Happy Days Theme Song started to blare through the speakers of the venue as Twin Atlantic made their way to greet fans. The atmosphere of the room changed dramatically, making it even more of an endearing excuse to see the talent the boys from Glasgow, Scotland were all about. With their power-pop and anthemic tunes, the band delivered quality music with a sentimental edge that the audience seemed to love. It was definitely refreshing to hear Sam McTrusty’s Scottish accent as he threw a joke here and there, delighting the audience with a giggle or two as an icebreaker. Seeing as it was the first time the band has ever set foot in Sydney, the crowd itself didn’t seem to mind the new exposure with already a few songs into the setlist. There were already a swarm of hands up in the air to “Hold On” and “Yes, I Was Drunk” with energetic rock and roll vibes coming from the stage. With a jubilant ending to their set, “Heart and Soul” graced Sydneysiders with Twin Atlantic’s best work and it was admirable to see the band take the stage, showcasing empowering vocals, energetic guitar and drum work whilst being genuine human beings that weren’t afraid to reveal their honest nature of work to a new audience.

The chants across the crowd flourished as soon as everyone knew who was up next. It wasn’t a surprise that excitement was felt everywhere around the room. The anticipation for Fall Out Boy to come on stage felt like forever but it was worth knowing that they liked to keep fans dangling on a string, making them antsy on what to expect next. Ear-piercing screams started to circulate around as the band graced the stage with opener, “The Phoenix”, making it a huge hit for people amongst the crowd. Things started heating up and it was obvious that the Roundhouse felt like a sweat fest already as Pete and Patrick had to tell the crowd to take a step back from the barricade so that everybody could catch their breath. Being favourably a pop punk band, it was delightful to capture the essence of the original roots of the band when they started playing classic goodies like “A Little Less Sixteen, A Little More Touch Me” or “Sugar, We’re Going Down”. Older fans that mainly flocked the back and the upper level of the venue thrived on the energy delivered by Fall Out Boy’s stage presence with the calibre of hits that came one after the other.

The chemistry was evident as soon as Pete Wentz started playing that epic bass line in “This Ain’t A Scene, It’s an Arms Race” and this was the part where everybody just let loose as soon as the chorus came on. Patrick Stump, innocent looking whilst wearing that fedora of his showed a sense of fierceness as soon as he bellowed those high notes, sharing the energy on stage with main guitarist Joe Trohman and accurate delivery of tempo in drumming by Andy Hurley.

New isn’t always better but “Irresistible” became a prime hit for many – not to mention Pete Wentz’s insanely dry but humorous tale about a scorpion and a frog. It was a clever way of introducing the new anthem to the crowd, creating an almost thought-provoking way of realising that sometimes we come across scorpions in our lives with Pete simply stating, “You fall in love with scorpions because they’re fucking irresistible.”

Savin’ rock and roll once again, the band outshined themselves with “Alone Together” by ensuring the crowd enjoyed every minute with a tune so fun to dance and sing along to that nothing else mattered; whatever stance you have towards Fall Out Boy, it’s a stellar track by them and one of their best.

With a three-song encore, ending with “Saturday” felt like a warp back in time with Fall Out Boy’s 2003 record, Take This To Your Grave and it was clear that their era of pop punk still lives within them and to end with that track truly shows that their music that once was, still is and always will be a part of who they are today.

Coming from an underground scene to achieving mainstream success in a few years, Fall Out Boy delivered a solid set list that were enjoyed by many. With such high enthusiasm, they’ve always been a band thirsty for a party. Through and through, the band have gone far in their music career and to see them flourish into something that a diverse audience can enjoy is well-worth the pitch to see them live.