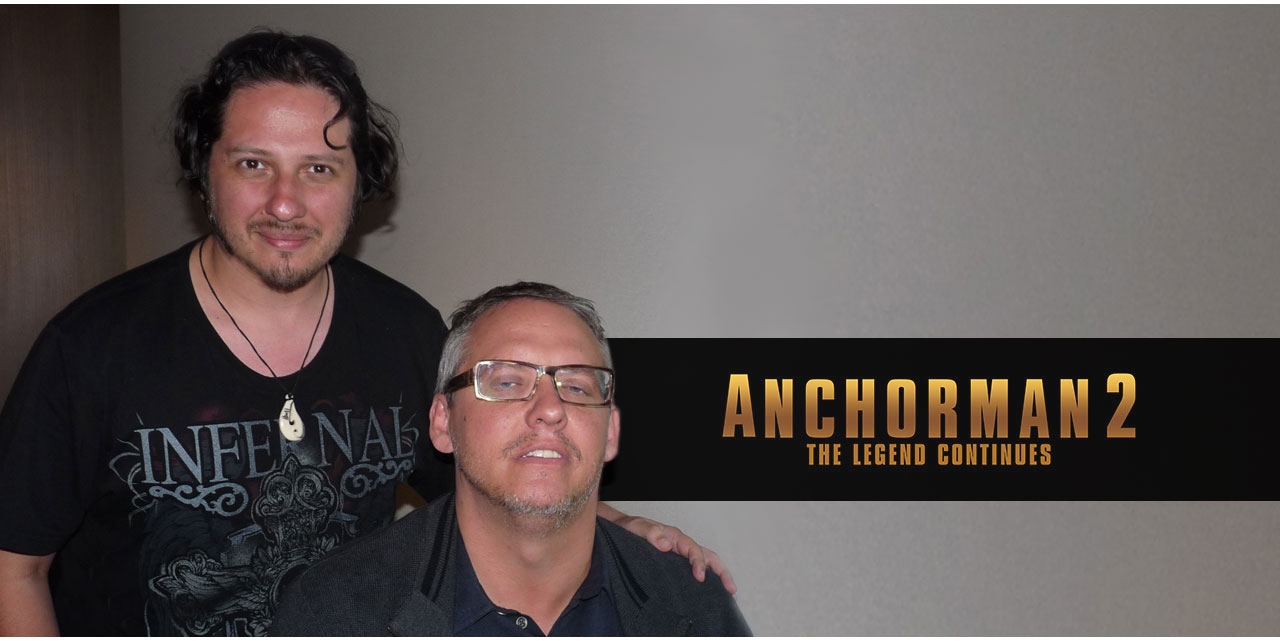 Director, writer, comedian and now Spotlight Mate, Adam Mckay is a director that changed the comedy genre, in 2004 with his Anchorman: The Legend of Ron Burgundy, a film that quickly become a cult classic and a world-wide phenomenon whose sequel Anchorman 2: The legend Continues will hit Australian cinemas in December.

Thanks to Paramount Pictures Australia we had the chance to interview Mr. Mckay while in Australia, alongside David Longo from Damn Good Cup, Courtney from MovieMag and Sasha Makarov from Celebrity Oz, about working on the film, a potential Step Brothers 2 and much more!

Spotlight Report:How did you manage to get all these stars and guest appearances at the same spot at the same time? Adam Mckay: Yeah, it was pretty crazy. I mean, at the end of the movie, I was more tired than I have ever been before. There were so many spinning plates and different elements and moving pieces to this. Different locations, and like you said, different cast; a huge cast and different cameos. It was kind of nuts, there was a lot of logistics and fortunately we had a lot of great help, our line producer David Householder was awesome. One of our producers from the company, Kevin Messick was really helpful in getting all those cameos and keeping track of them and making sure they came mean, and uh..yeah, it was insane, though.

Spotlight Report: Also we saw the names of Nicole Kidman and Green day between others on IMDB is that for real?

Adam Mckay: You know…somehow that rumour got started that Nicole Kidman was in the movie and they kept busting us with the cameos and we loved that they were wrong on one, so we never said no to it.

They would ask us! I wouldn’t say yes or no! I just said “Yeah, we got a lot of cameos”, and it kept going and going and going. Then when we were shooting the gang fight scene, I realised we should have gotten celebrity lookalikes to be on set.

We should have gotten a Tom Cruise lookalike going on! I didn’t think of it until afterwards, and if we ever do it again I’ll definitely do that.

Spotlight Report: How do you describe one day directing on the set of Anchorman 2? Adam Mckay: Well this movie was really jam-packed every day was heaps of material as this big movie had a lot of scenes, was about a 50 million movie but that is above the line. The thing is that below the line was about a 30 million movie. I really feel we shot an 80 million movie, so imagine every day was jam-packed with scenes and as we see the first scenes we all go improvising about the idea and what makes through and we talk between the shots and then we go to the scene and we cover all the coverage that had to be done, so every workload we had, was really twice… But at the same time was fun as hell! even we were really tired we had a great time together.

It was never a day of establishing shots after shots, every day was meeting after meeting and tons of improvising. It felt like shooting 2 movies at the same time. In fact we considered splitting the movie in two parts as we had so much material and we even saw it on the screen and was tested with audience but it wasn’t satisfying because you were missing this big ending, however, the audience didn’t hate it, it was just a lack of reaction. I think we probably could have done it but I don’t think it would work. We might see what happen in a year or so.

Spotlight Report: I spoke with John C. Reilly while he was here promoting Wreck-It-Ralph and I asked him about Step Brothers 2 and he said he will love to make a sequel. I wonder if that’s on your plans or not?

Adam Mckay:  We actually had the whole idea for the sequel, we started writing it and we were going to make it and everyone I told we were doing Step Brothers 2 they keep asking me Why don’t you do Anchorman 2. So, I went to Will and I said well this is crazy men, every person I tell about Step Brothers 2 asks me about doing Anchorman 2, but we know they studios won’t make it because of the budget but we should try one last time just to know a 100% sure and well that’s how we made Anchorman 2 as the studio said they will make it.

“I just love that movie! I know I’m saying no right now, but probably I will make it. We had some great ideas for the sequel its perfect!”

Unfortunately for Step Brothers 2 we put it down the line as I’m not doing sequel after sequel, so I don’t know… but  I love it so much, I will love to do it but I just can’t… OMG I just love that movie! I know I’m saying no right now, but probably I will make it. We had some great ideas for the sequel its perfect! And I’m really excited about it, but definitely we are planning more movies with Will Ferrell and John C Reilly, that team must be reunited. We have two projects on development at the moment and they are taking very good shape, for sure you will be seeing more of Will and John C Reilly.