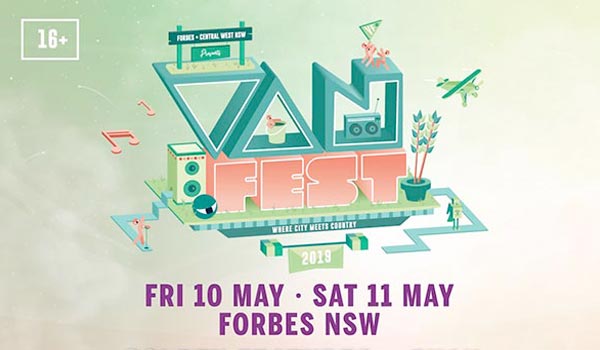 The highly successful NSW regional music festival, VANFEST will return in MAY 2019 with another powerhouse line-up of multi-award winning international and local DJs and musicians.

VANFEST will be back at the Forbes Showgrounds on 10 & 11 May 2019.  Following a hiatus in 2018 after the devastating floods that rained out day two of the music festival in 2017 the team have today confirmed their return and commitment to the Central West region.

The 2019 line up is rounded out with some of the best in the business, including internationally acclaimed chart topper GOLDEN FEATURES, who has reached #1 on the iTunes charts, and sold out national tours around the country. Joining them will be the ARIA award winning electro pop pioneers PNAU, who are set to bring their full live band including vocal & dance sensation Kira Divine hailing from Queens, New York City.

Spread across two days, VANFEST is the ultimate road trip getaway to set your sights on the countryside and escape the city for a weekend. There’s plenty of entertainment across the weekend including market stalls, bar activations, pop-up beach bars, VIP experiences, adrenalin rides, camping communities, and much more. Pre-sale tickets for VANFEST 2019 will go on sale 9am Friday 15 March with general public available at 10am on Monday 18 March 2019 from www.vanfest.com.au

VAN-CITY campgrounds, hosted by Wow Tents, will provide a pop-up community for the weekend with centralised common areas, where you can relax and enjoy the weekend with mates. Wow Tents offer multiple camping options from freestyle under the stars, to pre-pitched tents, powered sites, and even glamping for those who want to camp in style and comfort.

NSW Tourism award nominated VANFEST has established itself as one of the best regional boutique festivals in the country. For five years, VANFEST has delivered first-class entertainment in a safe environment while also supporting the local Forbes community.

Run by local operator Matt Clifton & team, they recognise the need for quality entertainment in regional areas and is supported by the NSW Government’s tourism and major event agency, Destination NSW and Forbes Shire Council.