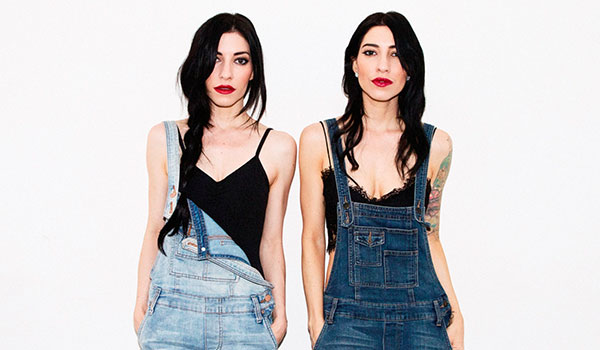 THE VERONICAS have announced their highly anticipated return to music with ‘YOU RUIN ME’, their incredible new single set for release will on Friday September 19th through Sony Music Entertainment Australia. ‘YOU RUIN ME’ is available for pre-order now and will be serviced to radio on September 11th.

“Sometimes a song comes along that no amount of planning as a songwriter can prepare you for. This song was written and recorded at 1am in the throes of emotion. We reworked it only a handful of times, leaving it in the raw state it was created.

“We have never been afraid to write from our hearts, and there is something that captures us when writing about heartbreak that we will always want to share. Because in the places we are broken, these are the places we learn to become the strongest.

“This is our time of rebirth” – Jessica and Lisa Origliasso

Written in conjunction with Australia’s premium song-writing and production team, David Musumeci and Anthony Egizii aka DNA Songs, ‘YOU RUIN ME’ is the first track to be taken from The Veronicas’ self-titled third album, set for release later this year. The music video will be released on Friday September 19th alongside the single. The Veronicas are Jessica and Lisa Origliasso, twin sisters from Brisbane, Australia.

Since releasing their first single ‘4EVER’ in 2005, The Veronicas have proven themselves to be international trailblazers for Australian music, attracting global attention and fans around the world.

The Veronicas have cemented themselves as a force to be reckoned with, having sold over 3 million albums and singles worldwide. Their chart-topping single ‘UNTOUCHED’ broke into the top 20 of the Billboard Hot 100, making The Veronicas the first Australian act to achieve such a feat since Kylie Minogue’s ‘Can’t Get You Out of My Head’ in 2001.

The Veronicas have spent the last two years travelling the world, writing and recording their third album, set for release later this year. This will be their first release since the Double Platinum HOOK ME UP in 2007 and their first with Sony Music Entertainment.

‘YOU RUIN ME’ OUT SEPTEMBER 19, AVAILABLE FOR PRE-ORDER NOW:

CHECK OUT THE TEASER HERE: http://smarturl.it/TheVeronicasTeaser