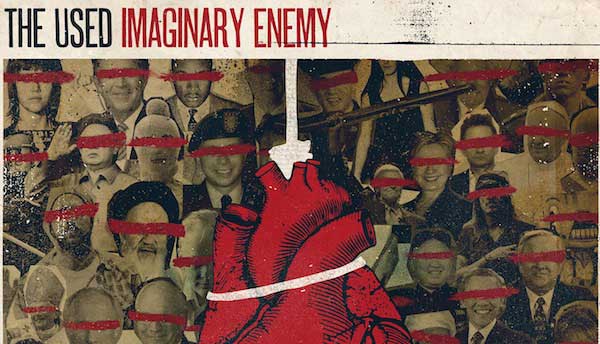 Pop punk band, The Used, have released their sixth studio album, ‘Imaginary Enemies’. The rockers have taken a similar approach as they have with each of their albums, which is to combine pop influences with emo punk music.

Bass guitar heavy and strong melodic beats are dominate on The Used’s opening track ‘Revolution’. The anthem of the album evokes a powerful message that is carried out through the rest of the album, as strong images of geopolitical issues arise in its lyrics. The debut single of the album ‘The Cry’ experiments with mixing strong guitar melodies with electronic sounds in the lead vocals.

A highlight is the track ‘Force Without the Violence’. The head-banging beat combined with lead vocals creates a perfect multidimensional tune that combines pop with emo punk rock.

The title track ‘Imaginary Enemy’ starts off as being a pop song but eventually the beat picks up gradually, with the addition of the screamo vocals, ending with a rock song. ‘El-Oh-Vee-ee’ has a very catchy chorus that really showcases the pop infused sensibilities that inspire their music, similarly to their title track the song evolves from pop to rock towards to the end of the track – which is often confusing. They are far from balancing the two genres well enough.

The Used are known for combining pop rock sensibilities with emo punk music over the course of their career. This album is no different. At times the balance between these two worlds created a perfect combination for songs, while at other times they failed to balance the two and instead delivered lackluster clean pop-punk.