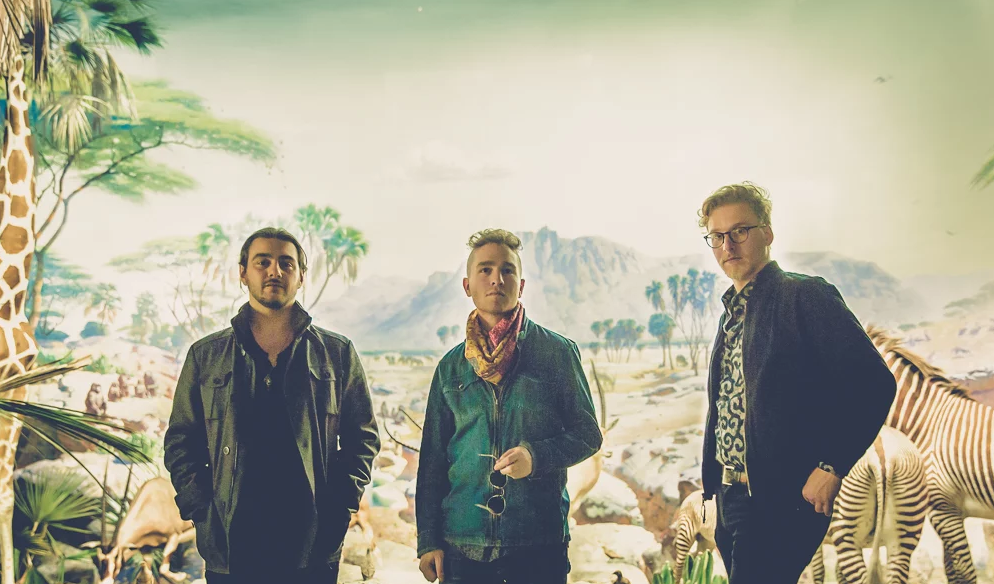 Having influences from the likes of Radiohead to Crowded House, New York psych rock trio Upright Man share their Top Five Albums that they have cherished throughout the writing of their debut self-titled record. Each member have their own stories and insights on how these albums helped them piece shape the songs in their first full-length of their career. Having an emotional connection while mixing some contemporary elements to the table, Upright Man show innovation towards their craft and aren’t afraid to dabble into experimentation if need be. The Bends was probably my favorite Radiohead album to reference when making the Upright Man record. It’s still rock and roll even though they were starting to use some more psychedelic sounds and move away from the raw distorted sound of Pablo Honey. A lot of our songs have started out as guitar and voice ideas and translate well into us rocking out with drums, bass and guitar with our pedal effects. It felt relatable to the mentality that The Bends was made with, before Radiohead moved into their electronic sound. There are a lot of amazing songs on that record like “Planet Telex, “My Iron Lung” and “High and Dry.” I didn’t know about Crowded House until about 3 years ago, but ever since I checked them out, I have been constantly going back to their music. I can really relate to the way Neil Finn sings and it has inspired me to use my voice in a different way and really own the falsetto technique. He is also a genius songwriter and there are no throwaway tunes on any of his records. I feel like this record taught me a lot about writing relatable pop songs without having to boil out the many quirks of writing as uniquely and intelligently as he does. Hearing and learning Jimmy Page’s guitar playing on all of the Zeppelin records has had a huge effect on my playing. Zeppelin III was probably the most influential on the Upright Man record though. The twelve string guitar parts in combination with electric guitar, and sometimes tribal rhythm section helped inspire the arrangements for some songs on our record. Elliott Smith has been a big influence on me as a singer. I’d love to say that Robert Plant or Paul McCartney is my biggest influence singing, but I find it a lot better to emulate and learn from the artists that I can relate to vocally. Figure 8 is full of amazing songs with interesting forms and a ton of character. Hearing his records made me want to double every vocal part I ever record. Just in case… Animals has become my favorite Pink Floyd record over the years. The psychedelic long-form songs take you on a journey while making some sort of sense the whole way through. There are so many iconic guitar solos and parts on that record that it’s a constant source of inspiration, both from a playing perspective and also from a recording and producing one. I’d love to really go for it and record an album with recurring themes and long-form rock songs one day.

Production, songwriting, part playing. This record has so many bright points, and it definitely served as an inspiration throughout the process of writing and recording Upright Man. Highlights: “Planet Telex,” “The Bends,” “My Iron Lung.”

The Beatles – The White Album This is simply one of the greatest records ever made. It’s nearly impossible to write rock songs in a remotely classic vein without being influenced heavily by this record and “Sgt. Peppers” and “Abbey Road”, oh and “Let It Be”, and “Magical Mystery Tour” and every other Beatles record. Highlights: The whole damn thing!

Pink Floyd – Piper at the Gates of Dawn I love the creative production and lo-fi nature of this one. There’s an unabashedness to it that is something worth emulating as an artist. Highlights: “Astronomy Domine,” “Matilda Mother,” “Interstellar Overdrive. Aside from Joni’s sterling work on this record, and the innovative songwriting, I really drew a lot from Wilton Felder’s bass playing on this record. Highlights: “In France They Kiss on Main Street,” “The Jungle Line,” “Don’t Interrupt The Sorrow,” “The Boho Dance.” This is one of my favorite albums ever. Andy Partridge is just a premier songwriter, singer, and guitarist. I went to this album a lot in the songwriting phase – production wise it’s a little early nineties sounding, but everything else about it, melodies, forms, lyrics, bass parts, all have deep applications for any writer, and can be drawn from in a multitude of styles and interpretations. Highlights: “My Bird Performs,” “That Wave,” “Then She Appeared,” “The Smartest Monkeys,” “Books are Burning.”

From Max Yassky (drums, back vocals) It’s cheating in a way to pick a live album but I’ve listened to Kicking Television’s live cuts more than any of Wilco’s studio albums. It’s a similar problem to listening to Citizen Steely Dan or my 2Pac anthology; I have no idea now what song is off what album. This and a couple other albums on this list have been with me since high school. That’s really not saying much when you consider that in high school. I also thought Pandorum – the 2009 Dennis Quaid space thriller flick – was a gripping and well-made movie. It’s not, it’s awful. But Kicking Television is not awful. It’s the fucked up live versions of already fucked up studio versions of country songs that are somehow deeply relatable. The cuts really took me someplace else.

They pushed me into the ground and made me smell the dirt and grass and flower buds; made me get ants in my nose and pollen in my eyes and cry very deeply and alone in some bus while the sun went down over rows of dead corn and hills of tall pine trees. If you haven’t heard it, the album consists of choice cuts taken from four live performances in Chicago in 2005. The songs are surreal and romanticised depictions of everyday scenes and anxieties. I went back to it when we were working on our album because Wilco’s drummer, Glenn Kotche, is one of my biggest influences. The way he moves when he drums and his original percussive craziness -the springs and coils penetrating his snare drum and the golden cricket symphony – he’s like a mad scientist…a total badass. “Hey now hey now, don’t dream it’s over” ring a bell? That’s Crowded House. But if that’s the only reason you know that band, you’re missing out on some of the more succinct and poignant pop music of the last 30 years. I hadn’t listened much until last year (2016) when Nick Katz, our bassist in Upright Man, brought them up as a reference for the kind of style and arrangement he was hearing for some of our earlier material. It turns out that one of my favorite drummers, Joey Waronker (Beck, REM, Atoms For Peace), recorded an album with Crowded House in 2007 called Time On Earth. Joey Waronker is a tone meister for drums, which is to say nothing of his mouth-wateringly simple-but-studded drumming style. I took certain drum and cymbal tape-muting ideas from him and even went so far as to request that we mic the toms with small diaphragm

I took certain drum and cymbal tape-muting ideas from him and even went so far as to request that we mic the toms with small diaphragm condensers rather than the traditional Sennheiser 421 dynamics (which took balls/stupidity to interfere with the masterful engineering of Bruce Sugar and Marc Copely). The result was a colorful, warm, transient and dead tom “thwamp” and “thwump” sound. I even put one tom up with no resonant head and enough tape to stop a bullet. Shut up. Go listen to this album in a car going 95 miles an hour on the palisades at 2am with your friend Skyler after spending two weeks wondering if the whole world doesn’t hate your guts. Do that and you can spare yourself reading my take on it. 2007 was a wicked year for music: In Rainbows by Radiohead, Neon Bible by Arcade Fire, Graduation by Kanye West, GA GA GA GA GA from Spoon, (my brief unmentionable stint with Okerville River), fucking We Were Dead Before The Ship Even Sank from Modest Mouse…but Era Vulgaris is the one that’s stuck with me.

Fifteen years old and drumming to “Sick Sick Sick” with the distinct desire to piss off my neighbors…that was part of my formative drumming experience. Joey Castillo, the drummer on Era Vulgaris, looks like he’d be more comfortable playing drums with prehistoric clubs rather than drumsticks. Of course, when I listen to QOTSA I also think about Dave Grohl who is one of my biggest music-professional influences (how to act when you step out from behind your instrument). Number 1 humble and hard working guy. This album is on the list because Joey Castillo’s drumming is just so brutally simple and clean that it actually sounds cruel. Joey Waronker. Again. Drums create/enforce/propel scene changes in music. Beck wields scene changes as haplessly in his songs as if they were mere nouns. Panache! You’ll be mid-beat and then everything is in french oui oui monsieur BOOM THE CHORUS. The performances, mix and arrangements on Midnite Vultures create the illusion that you’re somehow skipping through different vibes in a single track. It’s like flipping through TV channels every other word only to find that complete sentences are emerging from the randomness. I’ve danced across the Williamsburg bridge to “Nicotine And Gravy,” and “Milk And Honey” is a drummer’s wet dream. Most of the soundtrack to this film is done by Jon Brion, who’s collaborations with Ben Folds and separately Elliot Smith are some of my favorite bodies of work. But it’s the song he did with Beck, “Everybody’s Got To Learn Sometime”, that prompted me to write Upright Man’s “Three Easy Pieces” and desire it to sound the way it did. “Three Easy Piece’s” originality comes from the lyrical collaboration between Aidan and I, but the string-synth elements (arranged and played by St. Vincent’s Daniel Mintseris) came from a desire to evoke the same feelings that Jon Brion and Beck sapped from me the first time I saw the film. One of our producers, Marc Copely, is also a fan of Jon Brion and was pretty stoked on the idea of dipping into some of his mellow and sombre piano stylings. 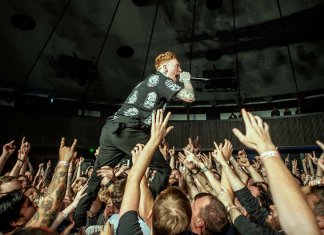 Live Review: Frank Carter and the Rattlesnakes @ The Roundhouse

Sergio Martin - January 20, 2020 0
Review by By Hannah Lewis Dalby The wait was over - Frank Carter and the Rattlesnakes were finally back with a five night tour showcasing...