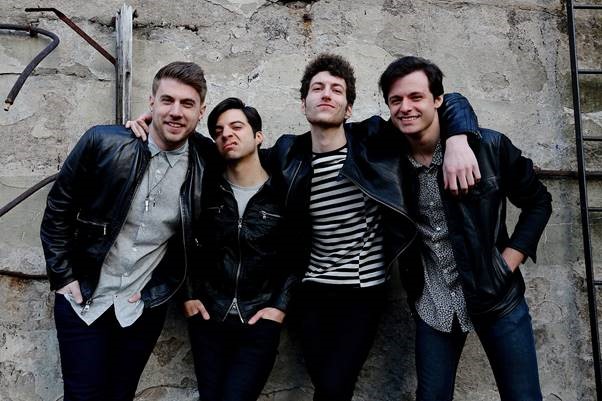 New York Rock n’ Roll/Power Pop outfit The Dives are worth hearing about. With their stellar success in the last eighteen months, it’s been a wild yet rewarding ride for the band. While the excitement and promise of touring and recording music have been experienced, The Dives are determined individuals – always searching for an opportunity to learn and progress and finding new ways to improve their craft.

This year, the four-piece released their debut EP Everybody’s Talkin’ and so far, it’s been receiving rave reviews due to the strong resemblance of rock n’ roll. In a sense, the young generation of kids are lucky to have a band like The Dives exist, showcasing that it’s possible to make things happen if you put your mind and soul to it. We managed to speak with Evan Stanley (vocals, lead guitarist, aka Paul Stanley’s (of KISS) son) and Sergio Ortega (bass, vocals) to talk about the process of their debut EP, the importance of being driven and their tour experience in the UK.

Look, I just want to say Congratulations on the success of your EP Everybody’s Talkin’. I mean, it’s been getting such positive responses. How do you feel about the responses so far?

Evan Stanley: We’ve been liking it. We’ve been getting some great responses and it seems like people have been really connecting, which is the most you can ask for.

That’s totally true. It’s a wonderful thing, I mean the sound that you guys are creating – rock n’ roll – that must be really cool to put forward to the younger generation as well. When you first started the band, was this like something you wanted to pursue initially? Or did you guys follow a different sound?

Did you feel like the writing process for this EP was a bit more organic than what you’ve previously written in the past?

Evan: I think we’ve all been in a lot of different bands, it was pretty incredible the first time we did it [playing music together]. It clicked – none of us have felt that in any other past experiences. But the kind of reason we got together was ’cause I had a bunch of songs done and [was] really dying to get out and play them. A lot of the initial songs we’d done before we even got playing was just really a matter of tightening up as a band and making sure we had a real coherent sound. The songs are in a totally different light and everyone really brings in their own voice in and that makes a huge difference – that’s what The Dives sound is. There’s a template with a song but then you gotta fill in all the blanks and there are a lot of blanks so to really make it a really full picture, that takes a lot of time playing together and really developing an identity.

Sergio Ortega: We usually work hard and you know, bringing our own experiences to the table and everyone seems to have their own unique flair but it really works out. It was evident early on that we kinda had something here. I don’t think you have that feeling every day, but we really seem to get on with each other really well very quickly we kinda knew what we were trying to say with this band. It’s been working out really well so far.

“You really have to be top notch to make this something sustainable.”

That’s excellent, guys. I mean, you guys have done so well with the debut EP. It seems like you have brought such life and chemistry to the table. The way you guys got together as well wasn’t really simple. You just came together but in a way, the music strengthened that bond between you as well.

Evan: Totally. It’s something that really brought us together after we met as soon as we played together – something just clicked and you know, it was evident after that that we all really liked hanging out. If we’re not with each other every day, it’s an unusual week.

Just the EP itself, did you guys go through any challenges or was it smooth sailing for you guys?

Evan: One thing we’re very lucky for is we have a very clear vision – an unwavering vision. I think trying to capture a live show and be scared of that on record is difficult and it’s something that we hadn’t really done before. Translating the way that it does, which we’re really, really proud of – it took some time and it definitely took some help. We had a great team – Bob, our producer helped a lot and he set aside some time during pre-production, just really rehearsing and you know, playing a ton of gigs. I think the fact that we play live all the time really helps.

Sergio: Absolutely. We worked really hard tightening up a lot of parts but like Evan said, capturing that sort of live energy really is the most difficult part and if something wasn’t right, we really kinda took our time and talked to each other, listened to each other. I really do think we accomplished that.

Your producer Bob, what did he bring to the table with the EP? How did he work through it with you guys?

Evan: I think the role of any great producer is really bringing out the absolute best of that band, you know. There’s certainly producers that we listen to and immediately you hear a record and you go, “That’s a so-and-so record”. Even though you don’t know the band, you know the producer. That’s not what we were looking for. We have a really clear vision of what we want. We were super, super lucky you know. Bob really – he’s fantastic at bringing out the best of the band. Hearing out ways to really highlight a song, whether it’s a specific drum fill or changing a groove here or there or a counter melody on a guitar, you know.

He’s got a good ear for arrangement and he knows us really well, which I think is a huge asset. The fact that he knows us so well personally and can really figure out ways to get our personalities into the track in a way that it serves the track for the better. Really what he did was help us get everything just a little bit more in focus and sharpen everything up just a little bit. But by no means was it changing who we are or what we do – it was really the opposite. I mean, just capturing exactly who we are and exactly what we are live and preserving that excitement when you don’t have a crowd around you. You listen and that’s a different art and he really helped to smooth over that transition for us from being a live band to being a recorded band.

You guys have been a band for around a year and two months and you must feel really proud of achieving many things in that span of time. How have playing shows been for you guys?

Evan: We’re so stoked and very grateful for everything that’s going on. You gotta push yourself endlessly and I think that one thing that worked really well for us and the fact that we’re always on the same page is that we always ask ourselves: how do we keep going and how do we get better? Every day, each one of us wakes up thinking about this band,  each night we go to bed thinking about this band – we really work endlessly to get better at all the little things. You really have to be top notch to make this something sustainable.

We’re never trying to look back and reflect on how proud we are, we’re trying to go forward. There’s no point looking back for us when it’s absolutely full steam ahead all the time, you know. So, you know we never stop and it never ends. Every single day, we’re working to progress.

You guys played the UK a couple of months ago. How did you feel about bringing out your songs to an audience overseas?

Evan: It was fantastic. We couldn’t have been more excited. It was something we worked really, really hard to make sure we delivered. At that point, the EP had been out a couple of weeks so people had a chance to hear it. We really worked our asses off to make sure we could deliver live – whether it was the harmonies or just really be a tight band. I couldn’t be more proud on how we did and luckily, I think we really connected. People seem to really get what we were going for so that was immensely gratifying.

Sergio: We were so stoked to be there. The energy that was coming from the people. We were definitely nervous but at the same time, it was more exciting than anything. At the end of the day, they don’t come to be bored. They want to be entertained – we really pride ourselves on putting on a good show and after every show – whether it’s big or small, we’re always asking ourselves, “Okay, what just happened? And how do we improve on that? How do we make it better?”

Did you sort of find it difficult translating your songs live?

Evan: Nah, we started as a live band. I think most bands start as a live band. For us, that was always the primary focus. Really, the challenge was capturing the essence of us live when we recorded this EP. I think live music is a little bit different because it’s loud and there’s a certain excitement when you’re with a crowd. Whether it’s fifty, a hundred or a thousand, if you have fifty people who are really in trance and deadset focused on something, that sort of energy to recreate that sort of experience on a record, that was a challenge.

What are your plans for the rest of the year?

Sergio: We’re just gonna continue to play live as much as possible. We’re coming up with new songs and material. We’ll get back and record real soon, you know. We’ve got a lot of fun stuff coming up.

Evan: At the end of the day, we have a few things on the books. We have a North American tour starting at the beginning of August, taking us around the country, which we’re all very excited for. We have some studio time booked so we’ll start hashing out a few things and just keep moving forward. That’s really the name of the game for us is to not stagnate. Whether it’s playing as many shows as we can, recording new material – we’re just happy to be moving.