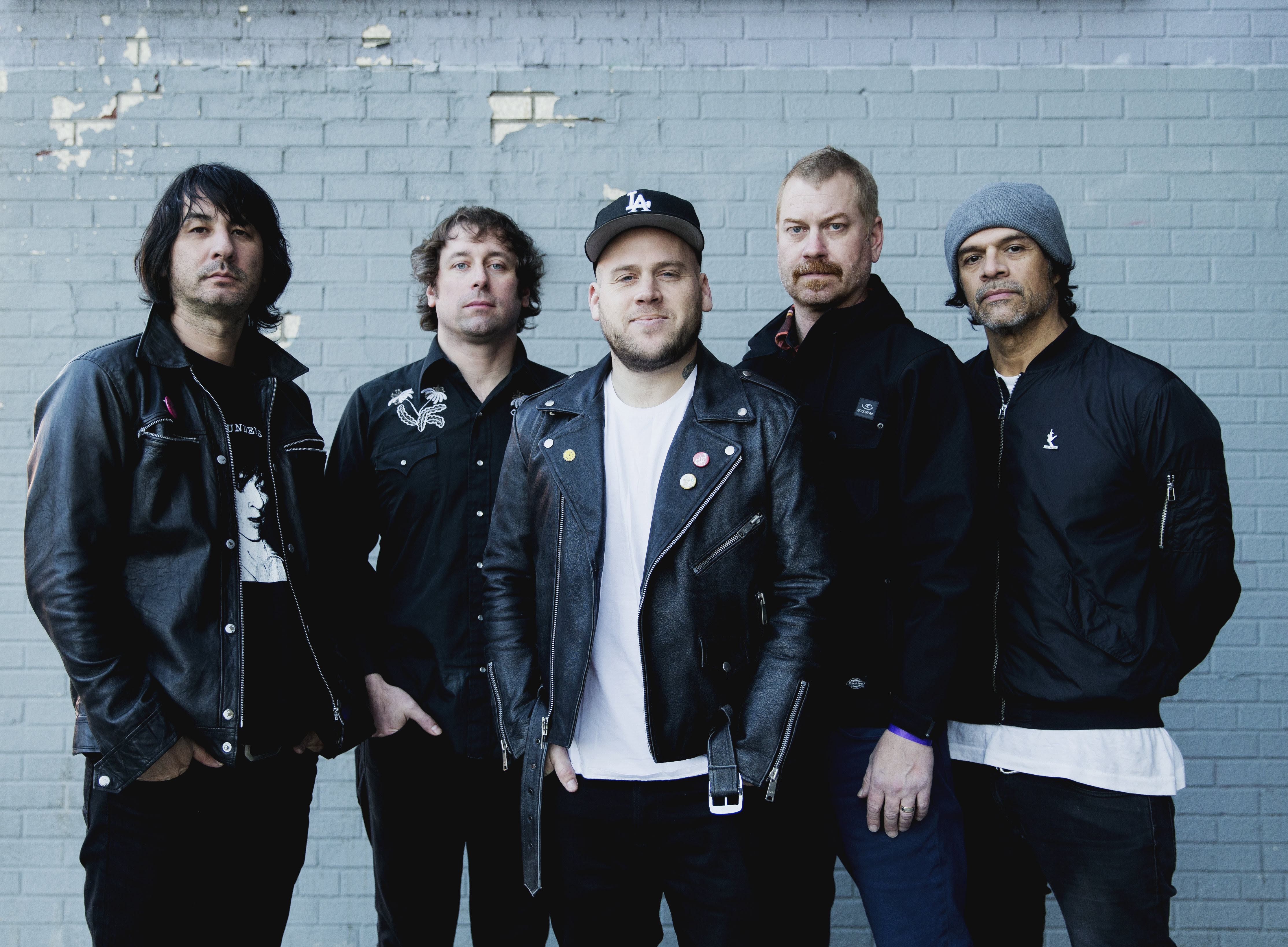 If you’ve been spinning V for the last three weeks, you’re on track to what good music is out there at the moment. LA punk/hardcore outfit The Bronx are passionate and energetic and it’s clear that they’re unstoppable at this rate. While some know their alter ego Mariachi El Bronx, others have grown to love the fierce songs they have cooked up since the start of their career, showcasing their love for creativity and experimentation has no bounds. As we spoke with lead vocalist Matt Caughthran, he was excited to embark a tour around the U.S, helping him gear up for the upcoming Australian shows with Pennywise this month. Here, Caughthran spoke about the importance of self-expression in punk music and how being in a band has helped him be open to his thoughts and feelings.

Where are you at the moment, Matt?

We are in Fullerton, California getting ready to rehearse for our show in LA. We’ve got a big tour coming up so before we’re coming over there [Australia] with Pennywise, we’re doing a full U.S tour for the new record so we’re getting everything lined up and just kinda hanging out.

Oh, awesome. Sounds like you guys are really pumped for these shows as well. Do you feel excited that you’ll be playing these shows?

Yeah, of course! I mean, we’re super stoked on the new record and it’s always super exciting getting everything ready. We got some new gear and new songs to play live. It’s just a really exciting time.

Well, I must say you guys visit on a regular basis. I think you came last year and then you’re coming back with Pennywise, which you just mentioned before. Looking back at your previous visits here, what do you find unique about Australia?

I think that one thing that I love about it is that the people are very real. I think that they appreciate music, they appreciate art, they appreciate the ocean and things that I grew up on in California so there’s like a similarity. There’s also just a fucking fun play – like everyone is so cool. I’ve seen a lot of the world and there’s a lot of great places in it, but it’s just kinda rare to come across an attitude like the Australian crowd, you know. It’s an embracing attitude and we’re stoked because it’s honestly our favourite place to play in the world.

I’m going to be really honest with you, I’ve never listened to your band but when I heard your upcoming album, it was straight up fucking amazing. I read in a previous interview that making this full-length came easy and you guys knew exactly what you wanted to sound like without setting any specific goals. Compared to the albums you’ve written in the past, would you say this was a rare occurrence for you guys?

Yes, but we always know what we want going into it. You always have to allow enough wiggle room for the record to just grow into whatever it grows into. But actually, from going into the studio to the time we finished the record, this was probably the easiest Bronx record we’ve ever made just because everyone was just on the same page and it just felt really, really good; things were just getting done really quickly and everything sounded awesome.

We had a great producer Rob Schnapf, he just knocked it out and we were in that small little space, every day for two/three weeks and it just came together. There are always songs that take longer than others but everything had this awesome mojo working for it on this record. It definitely was the easiest one for sure.

“It’s like a critical thinking exercise. In order to sit down and write an album, you have to look at yourself.”

It’s really refreshing to a see a band sort of combine punk as well as rock n’ roll into like one whole thing. How did you manage to find the balance between both genres?

You know, they go pretty hand-in-hand. I guess you can say there’s attitude in both, there’s aggression in both, there’s a lot of similarities between punk rock and rock n’ roll. It’s weird though because some people just don’t really know there’s a lot of straight up rock n’ roll bands and a lot of straight up punk bands. There’s nothing greater than rock n’ roll. To be able to play and be able to bounce back and forth between different types of songs and just be able to not write the same type of song over and over again is something we kinda thrive on. Anytime we get the opportunity to do something different we’ll do it.

I think what I admired the most were the passion and energy you have on this album and it seems like this was a very good outlet for you guys. You’ve mentioned before that you tend to hold stuff in. Do you think making this kind of music has made you more honest when it comes to confronting your emotions and thoughts?

I mean, I love writing and I know it kinda get’s crazy sometimes and you know you have to like rip your soul apart but it’s all good. For me, it’s the personal stuff that means the most and I love knowing there’s a personal connection to it and it’s not just some story because it sounded good or whatever. We try to stick to that whenever we write music. Just do something from the heart and usually, that’s gonna be alright.

You mentioned that you worked with Rob on this record. What was it like working with him when it came to developing these songs?

It was awesome. I mean, Rob – he’s my favourite type of producer. He’s not a guy who comes in and says “Okay, this chord needs to be this chord and this needs to be this or that needs to be that” and he’s not just an engineer too. He’s like the perfect mix of knowing how to make something sound great. He’s got a studio that still [has] the vintage equipment, guitars, amps, everything and he’s just the master of just getting that dirty, nasty sound.

On top of that, he’s a great musician. So when you’re sitting there, recording and you’re looking for an extra element or you’re thinking about what to add or what to maybe expand on, he’s there when you need him; kinda like having a great brain to help steer you in the right direction or confirm or deny any suspicions you have about the song and maybe some extra stuff that it needs or doesn’t need. It was the perfect connection on this record, which is rare; it’s very rare that you find a band that all getting along, while understanding each other and working towards the same goal and the producer that feels exactly the same way. If I could make every record like this, I would [chuckles].

Would you say that the vibe was more so collaborative?

Yeah, absolutely. You know this album has the first song written on guitar by Ken Horne and it’s the song called “Sore Throat”. That’s the first time that he’s been on a Bronx record as a major writer. Brad [Magers], our bass player played his ass off on this record and contributed a bunch of stuff and ideas. It’s very much a group effort, you know. David [Hidalgo, Jr.] on drums really put in the work and played his ass off so you know, we were all rooting for each other on this record and I think it shows.

I think it’s super fascinating that your band has an alter ego Mariachi El Bronx, except the music is totally different. It explores love themes as opposed to the punk and the ‘in your face’ music that you do for The Bronx. How has doing both shaped you as a person?

What I’ve discovered is that I am both of those people and I think that most people are. You would hope that they would have a good side, a bad side, an aggressive side and a loving side. What I didn’t realise was happening was when you only have one outlet, you tend to lean that way in life so having El Bronx has helped balance out the good with the bad and the happy with the sad. It really helped balance me out as a person; just being able to have an outlet for basically every emotion I go through.

Just to wrap up, what would you say has remained constant in the punk community since growing up and falling in love with the genre? Cause I read that punk was the genre that sort of resonated with you while growing up as a teenager.

V is out now via White Drugs / Cooking Vinyl Australia

The Bronx will be touring this October and November with Pennywise. Check out the tour dates below!

Tickets are available from www.tickets.destroyalllines.com