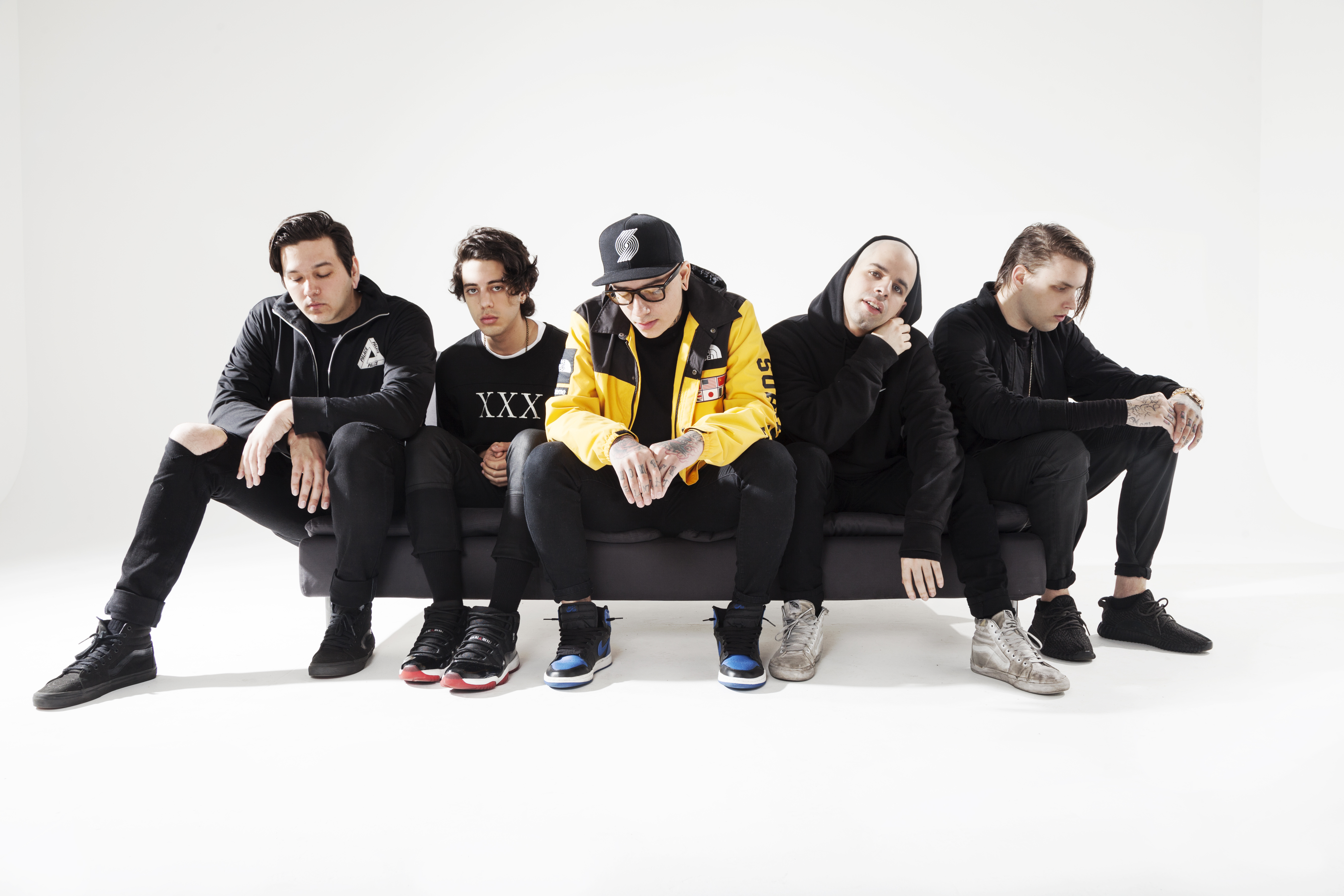 From Queens, New York, there’s a band not many people have heard of just yet. If metalcore quintet Sylar doesn’t ring a bell then it’s worth hearing the buzz about the talented outfit fusing elements of nu-metal, rap and metalcore in their music. Since their career kicked off in 2012, the band have managed to release their debut record To Whom It May Concern and their sophomore record Help! in 2016 through Hopeless Records. Though their record label’s roster is pop-punk filled, Sylar balance the equation with their heavy music, engaging listeners with their unique stance of making metalcore accessible to everyone.

It’s apparent how much influence they take from Linkin Park and speaking with lead vocalist Jayden Panesso on the subject was everything to him. For Panesso, he admits that Linkin Park is his favourite band and frontman Chester Bennington’s death felt like a part of him was ripped away. Though Bennington’s death shook the world, Sylar didn’t hesitate to release a cover song of “Points of Authority” where 100% of net profit sales would go towards National Alliance of Mental Illness. Not only are Sylar a band of generosity but they are humble when it comes to offering a platform for listeners to feel hope and love at the same time. In this interview, we get to know Jayden Panesso on how Linkin Park has shaped him as a person and why having a conversation is so important when it comes to taking care of your mental health.

So I think it’s super exciting that you’ll be heading out to Australia in November with Miss May I for the first time. What are you looking forward to the most when you come up to Australia?

I’m just very much looking forward to connecting with the kind of people that I’ve never been around, you know. It’s a whole new country, a whole new culture for me and it’s so cool when you can work in a completely different country and just connect with people through music -that’s the biggest part, you know. I’m very excited to see your country. I know it’s a very beautiful place. I’m just looking forward to it all – it’s such a good experience to play outside of Europe, you know where you’re used to your comfort zone.

“We just felt more comfortable with expanding our horizons and really opening up to what we wanted to do with our music.”

Last year, you released your sophomore record Help! and it was really well-received from fans and critics. I like how diverse the band’s sound is. You infuse hip-hop sound influences and I think that’s really unique to the table. Up until this point, how do you feel about the journey so far with the band?

Yeah, I know. The hip-hop/RnB factor definitely plays a big role in our music and it just feels good – it’s not like it’s forced, you know? I grew up with hip-hop music my whole entire life. I actually got into hip-hop before I got into metal so being able to kinda, you know, flip that hybrid together of RnB, alt-rock, nu-metal – all the stuff that we like and kinda come up with our own sound, is very cool, it’s a good feeling, you know. It just feels legitimate to me and still feels like I’m making the music that I want to make.

Compared to your debut record To Whom It May Concern, what did you guys do differently on Help!? Did you feel like you were able to develop your hip-hop influenced sound even further? ‘Cause I feel like the screams were a bit toned down for this record and you guys did more clean singing, which I really liked as well…

We just felt more comfortable with expanding our horizons and really opening up to what we wanted to do with our music. Seeing people respond to it in a great way was so cool ’cause a lot of the times, if a band would stop screaming or scream less, people lose their minds over it. None of our fans really complained much so it was very cool.

You also worked with producer Erik Ron on this album, and he’s worked with Escape The Fate. How would you describe his work ethic and what did he bring to the table that challenged you as musicians?

He’s such a talented dude. At this point in time, he feels like another part of the band. He brought a beast out of me, you know. He helped me do things that I didn’t know what to do with myself in my voice and it’s just so exciting. He’s now become one of my greatest friends and I just totally look forward to working with him. It’s such a good, chill environment. You can bust your ass, work hard and come up with some great songs. You also have a place where you can kick back, chill, play some computer games in there if you want or just take a walk down the strip in Hollywood so it’s a very cool environment.

It sounded like a collaborative process as well. I mean, the musicianship on Help! was strong. It was more so on the influence of nu-metal and hip-hop.

It was very much what I was listening to at the time. I was listening to a lot of Drake, Linkin Park, Limp Bizkit, Deftones, P.O.D – bands I grew up with, even Eminem. Even if it was a small rapping part, Eminem was a big inspiration to some of those themes in the record.

I read in an interview that Linkin Park is your favourite band and when I listened to your music, I instantly knew they were an influence. Around the time, especially when Chester [Bennington] passed away, you guys released a cover song of “Points of Authority” and 100% of the net profit went towards National Alliance of Mental illness. How has Linkin Park shaped you as a person?

I mean, man, Linkin Park… I’m still like hurting from the whole Chester thing because Linkin Park was like that band. If I had a problem with my parents or I get angry at my mum, I would just like run into my room and throw Meteora or Hybrid Theory on. It was those albums I used to escape the problems I was going through while growing up and it inspired me so much. It’s very cool when people tell me that they can hear the Linkin Park influence in our music because I’m not ashamed of it at all, you know.

There are bands that have shaped the way I look at music and new music along with thousands of other people, you know. They’re just magic to me – they’re my favourite band and it’s a tragedy whatever happened with Chester, but you know, the music will live on forever and that’s something that’s really gratifying, knowing that creating records last an eternity. They deserve more respect in the world.

Chester’s passing was so devastating. I grew up with LP too and on the day of his death, I was repeating “Shadow of The Day”. His death didn’t feel real – it was really heartbreaking.

We were actually on Warped Tour and our tour bus had just broken down and we were just hanging out on another bus and I read the news and it just ruined my mood. We had to go play a set in a few hours and it was just so sad. For the rest of Warped Tour, we let “Crawling” play on the speakers before we’d go on, it was really cool to hear fans singing “Crawling” before we’d go on stage. It’s really, really sad. Listening to “Leave Out All The Rest” too is real sad and every lyric now is just even more meaningful.

I read your touching statement around Chester’s death and you were saying that Linkin Park’s music was your way of escaping reality as well. Now, you’re on the other side, making music and sort of doing that for other people. How does it feel providing music as an escape for your fans and being on that same platform as Chester was?

It’s very crazy because I don’t know, when I started writing music, even now it’s just weird because I don’t really sit down and think of lyrics. I never tried to be a role model or tried to be that preachy guy or anything. I just wanted to use the platform that I’m glad to have [and] just accept my emotions. Seeing how many people have told me that our music has changed their lives is just absolutely incredible.

To see him go out that way, it just put me in a weird state of mind for a little bit. I will never forget this fan at Warped Tour, he told me he was really emotional about the whole Linkin Park thing. He came to our signing and he goes “Listen, man, just hold the torch and just take the torch. Just do it.” I just thought it was super deep and really cool to hear it.

It’s like a double-edged sword, especially with lead singers. Jeffrey from the band Thursday actually penned an interesting statement he compared lead singers to goalies in soccer “you’re a team mate and you stand alone and often get blamed when you lose the game”. What do you think about that statement and how can lead singers take care of themselves, especially when it comes to their mental health?

I’ve dealt with some of that myself but the main thing is you have to talk to people, man. Bottling up all those thoughts and bad vibes and feelings and fears, they just grow stronger when they’re inside of you; it’s so toxic. I just feel like people need to speak up and put their guard down and be vulnerable.

Being vulnerable is so important, which is a big thing that it doesn’t just come with being a musician. In a world where there’s a lot of alcohol, partying, pulling your walls down, being vulnerable and just venting is so liberating. It’s crazy how much it helps. I encourage people to speak up. Seriously.

Be sure to check out Sylar as they support Miss May I during their Australian Tour in November. Check out their dates below!

‘THE SHADOWS INSIDE’ AUSTRALIAN TOUR
WITH SPECIAL GUESTS: