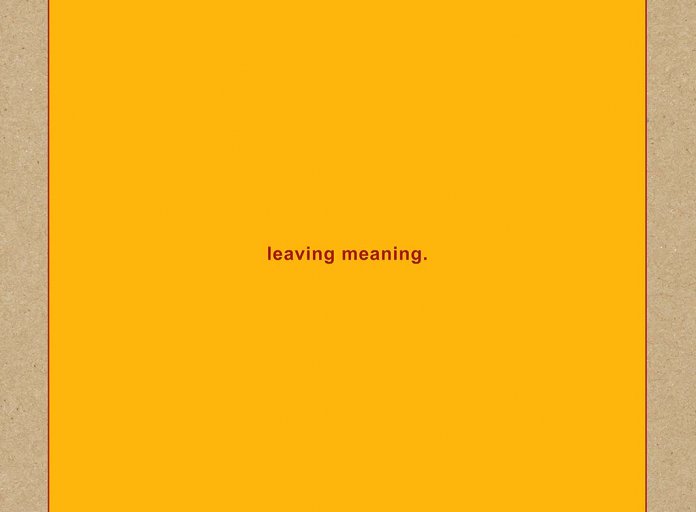 The announcement of a new Swans album always raises the question: “What’s Michael Gira up to this time?” Even if you’re able to hear the acoustic sketches of the songs he provides on his limited edition fundraising albums, it’s unlikely you’ll have any idea what the finished product will sound like.

Leaving Meaning, Swans’ fifteenth album (not including their innumerable EPs, live albums, fundraisers, revised releases and the entire Angels of Light catalogue) is a surprisingly quiet evolution of the drones of The Glowing Man, and a return to an earlier lushness we haven’t heard from Gira in a while. The lushness in question derives from the massive supporting cast of musicians assembled for the project, including The Necks, a host of former Swans members and their companions from their other bands as well as people Gira summoned like Anna and Maria von Hausswolff, Ben Frost, Baby Dee and more besides.

Where the preceding trilogy of double albums The Seer, To Be Kind and The Glowing Man ratcheted up tension expertly with the promise that the band was about to explode into noise, Leaving Meaning employs a quieter sort of menace. The droning song structures of those albums remains, but his collaborators have changed the sound of the music into something both quieter and more vast.

Leading off with the ghostly, beautiful instrumental Hums, the first song proper is Annaline, a song previously appearing in skeletal form, but here taking shape into something cinematic, ready to join Untitled Love Song as one of the prettiest Gira ballads.
<

The Hanging Man returns to the menacing mantras of previous tracks like The Apostate, but is quickly counterbalanced by a re-imagining of 1992’s Amnesia. The weight and dynamics of the arrangement on Amnesia really have to be heard to be believed, with a simply-plucked verse that roars into an orchestra- and choir-backed recitation of the song’s title. The title track, Leaving Meaning, strongly features The Necks’ distinctive piano warbles, with Gira chanting quietly over a slowly modulating, ever-growing musical landscape. This mesmerising track is followed by one of album’s most aurally hostile, Sunfucker, which genuinely feels like the soundtrack to a ceremony that’s going end in a human sacrifice. Cathedrals of Heaven is a moonlight wander through a sinister desert, leading to one of the most striking tracks ever recorded by Gira: The Nub.

“I was playing this guitar part and, as is usually the case, I couldn’t come up with any fucking words and for some reason I thought of Baby Dee, who is a great cabaret kind of performer, and this image appeared in my mind of Dee in diapers floating in space and sucking on the stars for milk. And so the song just wrote itself and then I contacted her and she was delighted with the imagery and she agreed to sing it.” said Gira when I spoke to him. Deposing The Seer‘s Lunacy as the witchiest track the band’s ever put on a record, The Nub‘s atmosphere is so vivid it deserves to be the subject of a short-film.

It’s Coming, It’s Real is the obvious easy entry point to the album, but no less for it. If you’ve always enjoyed Gira’s “country” tracks, this is one of the best. Some New Things is a droning shamble of a song that doesn’t really stand on its own, but when the uncharacteristically optimistic (for Swans) What Is This starts playing, you’ll be glad you persevered. Finishing the album on My Phantom Limb, a piece beginning with a barrage of spoken-word hectoring climaxing in a tympani-driven chorus that sounds both happy and murderous.

A comedown, but not a letdown, from the last three explosive albums, Leaving Meaning is sure to worm its way into your Swans playlists. A partial return to the sonics of earlier records, it’s too sinister for many ears, but utterly rewarding for those with the fortitude.