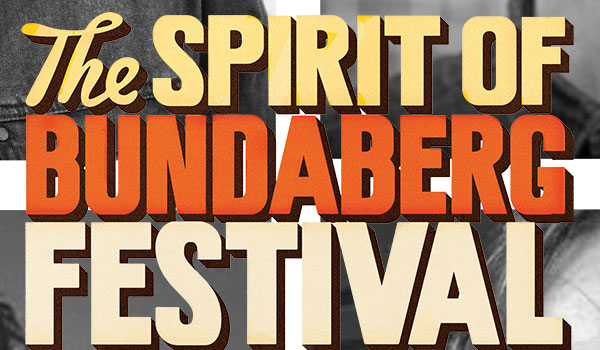 After the phenomenal success of its May festival, The Bundaberg Distilling Company (BDC) is proud to announce that The Spirit of Bundaberg Festival will return to the Distillery grounds on Saturday 10 October. The event will feature the best food and drink Bundaberg has to offer, while attendees will be able to enjoy an incredible line-up of Australian talent.

Headlining the show will be Australia’s premiere supergroup – Antidopean Rock Collective (ARC). ARC consists of four of Australian rocks’ most iconic artists, including Jet’s Mark Wilson, Spiderbait’s Kram, Powderfinger’s Darren Middleton and returning once again after headlining the May show, You Am I’s Davey Lane. This is the group’s first Queensland show of 2015 and one of the few remaining chances to see the band, which has a collective 33 Aria awards and 16 Top 10 albums between them, live this year. On the day, the supergroup will play favourites from each of the members’ respective acts – past and present – ensuring there’s something for everyone.

Support for ARC comes in the form of genre-defying musician Eden Mulholland, who will be playing tracks from new album Hunted Haunted. Brisbane’s Zefereli will also be bringing his dreamy soundscapes and falsetto vocals to the festival atmosphere, whilst Young Dingoes will be back for a second year following narrowly missing out on winning the Battle of the Bands competition at last October’s festival. More acts will be unveiled in the coming weeks.

The festival celebrates all things rum with a huge array of activities that will bring together friends, strangers, locals and travellers in one community spirited event. Throughout the day, attendees will be able to enjoy local rum-inspired food stalls, cocktail master classes, Bathurst Fan Zone (for those with a love of music and motors), along with so much more.

The festivities will also mark the latest release of Bundaberg Rum’s Master Distillers’ Collection (MDC), MDC Black Barrel – Distilled 2005. Each year, the MDC release a new blend in limited, numbered bottles and this year’s batch will continue to build on the success of the Bundaberg Black range that has amassed a series of accolades; including recent award wins at the New York Wine and Spirits Competition 2015, San Francisco World Spirits Competition 2015 and International Wine & Spirit competition 2015 for MDC Black Barrel – Distilled 2004.

The BDC team will be transforming the distillery grounds into a lively festival arena open to the public from 10am to 8pm.

This year, the region’s biggest free music festival, will also form part of the closing proceedings of Crush Festival’s 10 day Curated Program of new and innovative arts projects and performances, running from the 3-12 October.

To get exclusive updates, news and info on The Spirit of Bundaberg Festival follow the official Bundaberg Rum Facebook page: https://www.facebook.com/Bundyrum

For information on the Crush Festival go to www.crushfestivalqld.com.au


An outstanding premium rum, MDC Black Barrel – Distilled 2005 is a full character old-aged dark rum, which has been instilled with notes of caramel and sweet raisins, making it a well-balanced treat for the palate.