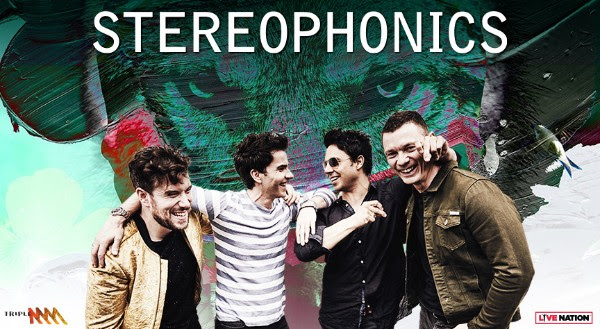 STEREOPHONICS have added a second and final Sydney date to their much-anticipated run of shows, touring in support of their latest album, Scream Above The Sounds. Tickets for this show will go on sale at 11am this Monday, March 19.

Cymru’s rock ambassadors, STEREOPHONICS, will make a welcome return to Australia for a run of much anticipated shows this April, marking their first Australian tour since 2013.

Stereophonics are heading out in support of their latest album, Scream Above The Sounds, launching with a show at the Sydney Opera House on April 26, then onto Brisbane’s Tivoli on April 28, Melbourne’s Forum on April 30 and HQ in Adelaide on May 3 before wrapping up the tour in the west with one night at Fremantle Arts Centre on May 5.

Renowned for delivering consistently superb, dynamic live shows led by the raw vocals of Kelly Jones, during their current European tour Stereophonics have been treating fans to scorching sets showcasing Scream Above The Sounds tracks live for the first time, interspersed with timeless favourites such as: ‘Maybe Tomorrow’, ‘Superman’, ‘The Bartender and the Thief’, ‘Mr Writer’, ‘Local Boy In The Photograph’, ‘Dakota’ and ‘Have A Nice Day’.

Tickets for all shows go on sale at 11am this Wednesday, March 7.My Live Nation members can be among the first to secure tickets during the pre-sale beginning at 2pm Monday, March 5.