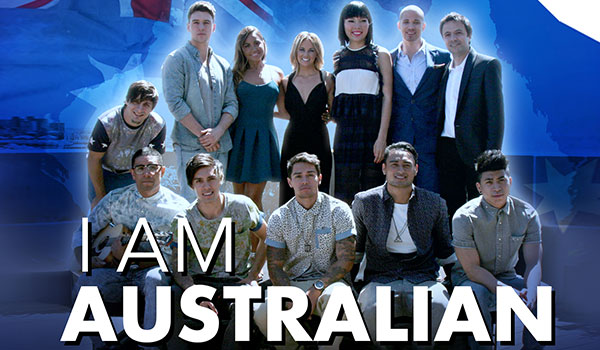 Sony Music Entertainment is excited to announce that the ultimate Australian tribute song, I AM AUSTRALIAN has been recorded by some of Sony’s Australian pop artists (Dami Im, Jessica Mauboy, Justice Crew, Nathaniel, Samantha Jade, and Taylor Henderson), to coincide with the Australia Day long weekend celebrations. It will be serviced to Australian radio today, Thursday 23rd January ahead of being available to purchase this Friday 24th January, 2014.

On Australia Day, Sunday 26th January, the stellar line up will each be performing an Australian cover song as well as their own material onboard a floating stage off Blues Point, Sydney Harbour. They will also be joining forces to perform the huge finale together of I AM AUSTRALIAN.

On joining together to record such an iconic song, the artists had the following to say –

Jessica Mauboy: “WOW…. what a song. What an honour. I love Australia Day and I am so thrilled to be a part of this recording. It was such an amazing experience recording the song I and cannot wait to sing it again live on beautiful Sydney Harbour.”

Samantha Jade: “I just love this song. It really embodies the Australian spirit of inclusivity and it sends out a message that no matter where you were born or what colour your skin is, we all enjoy celebrating being Australian.”

Justice Crew: “What an honour it is to be a part of this recording. We used to sing this song at school assembly and now to be a part of the special Sony Music recording with some of the best singers in the country is such a buzz.”

Nathaniel: “Being born in South Africa and then moving to Australia at 6 years old, to now being a part of this very patriotic and special day is amazing. To be singing one of the most iconic songs of Australia and to be releasing it amongst other featured incredible artists is a privilege and an absolute honour and I am so grateful to be a part of it.”

Dami Im: “What a unique and wonderful collaboration to be a part of. ‘I Am Australian’ is such a patriotic song that represents togetherness and the Australian spirit and what better way to celebrate this than through music.”

Taylor Henderson: “It is such an amazing experience to work alongside the Sony family on such a special release. A year ago I was a proud Australian singing this song with my family and now to be a part of this official recording with my name alongside the other amazing talents on the record is such an honour. This song is so typically Australian and I am so proud to be a part of it.”

The single for I AM AUSTRALIAN will be available to purchase from this Friday from all digital retailers.