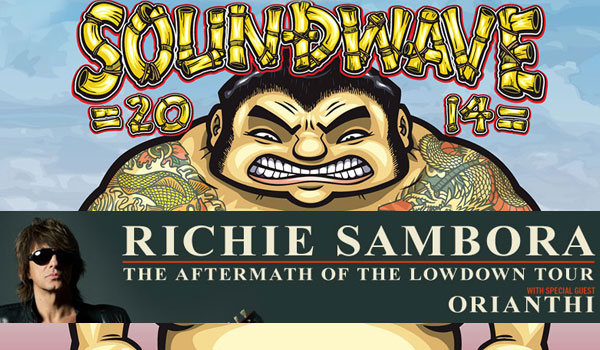 Celebrated American rock icon RICHIE SAMBORA will play just two intimate sidewaves while in the country for Soundwave Festival 2014! For the first time EVER, Australian fans will have the opportunity of a lifetime: To see one of the greatest musicians and singer- songwriters of our time performing material from his solo records with a few surprises thrown in.  With three acclaimed solo albums that have highlighted a more personal and intimate side to Richie’s songwriting, (1991’s Stranger in This Town, and 1998’s Undiscovered Soul and 2012’s Aftermath of the Lowdown, which spawned the powerful single “Every Road Leads Home To You.” this promises to be a mind-blowing night of rock and roll!

RICHIE SAMBORA has become known throughout his remarkable 30-year career for his raw vocals, indelible songwriting and world-class guitar playing. As both an acclaimed solo artist and a founding member of multi-platinum, Grammy-winning band Bon Jovi, Richie has sold over 130 million albums worldwide and has co-written over 20 Top 40 hits and 11 Top 10 hits, including “Livin’ On A Prayer,” “You Give Love A Bad Name” and “Wanted Dead or Alive.” He was inducted into the Songwriters Hall of Fame in 2009.

“Not only does [Aftermath of the Lowdown] contain soul-searching songwriting, it flat-out rocks.” – USA Today

Joining him onstage will be none other than Australian singer-songwriter and guitar goddess Orianthi, who has worked as lead guitarist to some of the biggest superstars in the world (Alice Cooper, Michael Jackson).

Richie is continuously lending his vocals and support to important causes and organizations that resonate deeply with him, whether it be the Hurricane Sandy relief effort affecting his home state of New Jersey or issues regarding the environment, homelessness, illness, hunger and music education.