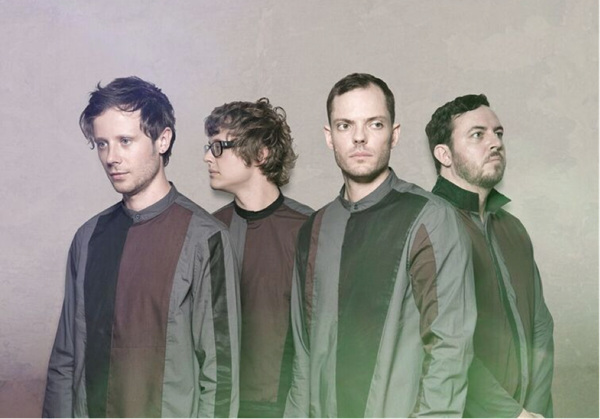 Having a futuristic fusion of indie-pop and rock, it’s no wonder Brisbane’s Hey Geronimo create excitement when it comes to their boppy tunes, perfect for the Summer season. While the band are just about to wrap up their ‘Brave New World‘ Australian tour, the four-piece haven’t skimped on creating new material, releasing their latest single “Mutant” not too long ago. It describes Pete Kilroy’s (guitar, vocals) fanboy moment of meeting the talented Courtney Barnett as “a babbling, indecipherable mess.” Kilroy was kind enough to share with us his favourite five songs at the moment, having a touch of humour and wholesome perspective behind each track.

Roger Waters – “Is This the Life We Really Want?”

This is probably my favourite song at the moment. There’s just something about it. I think I’m fan of how earnest Roger Waters sounds on it… not that he’s ever had a problem with that. The lyrics are great and the whole thing is just menacing. Walks right up to the line of being “preachy” but doesn’t quite get there. I’m also a fan of how Waters uses samples and sound effects on this album. Again – something he’s always been pretty adept at. We’re actually going down that path a little bit with our recordings at the moment. It really ties an album together if it’s done right. This tune and album has also spurred me into going back through Pink Floyd’s catalogue, which is always a pleasure!

I’ve been banging on about this album (Get To Heaven) for about a year now, but it’s that good so I’m going to continue! I’d say this is my favourite song of the last few years. The production on this record is amazing, only beaten out by how solid the concept of the album is. Bingers put me onto this record/band, as he was impressed with how a band could write a pop album about how cruel and confusing human nature can be. The vibe of this tune perfectly encapsulates the album, but I’d recommend starting from the beginning with this one. The whole thing is fantastic – give it a few listens!

Real Estate – “After The Moon”

Ok, so this is pretty much the opposite of Everything Everything. Nothing bombastic of crazy or deep about it (as far as I know). It just sounds bloody good! This band has a reputation as being ultra-relaxed and chilled, and this song couldn’t be a better representation. If somebody were to ask me what a dream sounds like, this would come close. More specifically, maybe a dream that George Harrison was having. This track is a good one for when you’ve had a long day and just need a few mins to do nothing and switch off your brain. The rest of this album (In Mind) is pretty good too. I think I’ll catch these dudes when they’re in town later this month.

The Fauves – “Self Abuser”

“Hey self abuser, beating off used to make me feel like a loser.” Wow, what a start to a song. I’ve included this song just on the chance that someone somewhere will be introduced to The Fauves. Such an underrated band. Jokey theme aside, this is actually a great song, as are a bunch of other tunes on the album (Future Spa). In fact, this record was nominated for an ARIA! These dudes were the perennial Aussie battlers. There’s a great doco on YouTube about them called 15 Minutes To Rock that borders on being the musical version of The Office.  Anyway, my actual favourite Fauves song is called “Bigger Than Tina” (a song about trying to be as popular as Tina Arena), however, it can only be found on YouTube, so best to stick with a song about masturbation. Here’s to you, The Fauves!

Dappled Cities – “Run With The Wind”

This song is a few years old, however, I regularly go back to it. I think it’s easily one of the best songs put out by an Australian band in the past 5 years. It pops to mind because I had the pleasure of seeing these dudes at the Keep Sydney Open mini-festival on the weekend just passed. I actually remember the day this song came out. I was late to work, and it was streaming exclusively on triple j’s website. So, I plugged my phone into the car stereo and repeatedly streamed it over and over again, trying not to crash on my way into the city. I also LOVE it when a band takes a bit of a break, and the first thing you hear when they come back is an absolute belter. Again, this song did come out a while ago, but it’s just that good and represents the band’s career brilliantly over a four minute period.