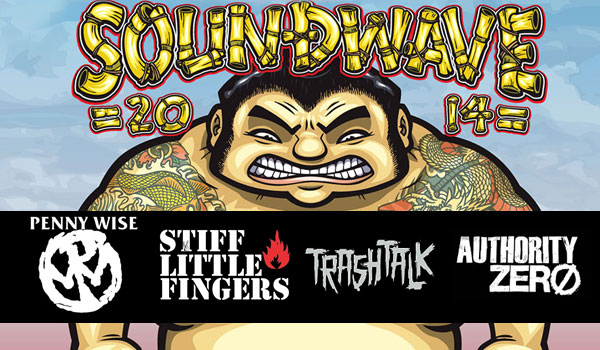 Get ready to watch history being made, as four game-changing international punk rock bands hit our shores for what’s sure to be an unforgettable night.

A thriving, ground-breaking punk rock band for over 25 years, PENNYWISE has seen members come and go but it’s relentless, in-your-face, middle finger in the air, anthem-chanting sound has never wavered one iota. Upon their reunion in 2013 fans across the globe have been treated to some of the greatest shows in the bands storied history. Now Australian fans get their chance to witness this unforgettable night of punk rock in a venue not unlike the ones Pennywise cut their teeth when they first started in 1988….a down and dirty punk rock pub show.

Iconic punk pioneers STIFF LITTLE FINGERS are back with their signature bite and snarl energy, gut-wrenching honesty and political outspokenness. After laying the foundations for the revolutionary movement in 1977 alongside the Clash and Sex Pistols, the band from Northern Ireland has defiantly stood the test of time, continuing to play to both newer fans and original diehards at sold-out shows across the globe. In true punk rock style, SLF compose meaningful, brutally honest lyrics that question authority and society as we know it. After countless tours and nine studio albums (with a tenth on the way), there really is no denying that STIFF LITTLE FINGERS are back, better than ever, and seriously packing a protest punch.

Buckle up, because ferocious Sacramento hardcore punk band TRASH TALK is bringing its show to Australia, and it may just cause a stampede. Being the only non-hip hop act to be signed to controversial American label Odd Future demonstrates how this act continues to push the creative envelope, while at the same time staying true to the original underground punk traditions. Mountainous riffs, pulverizing paces and even some brutal dissonance in the newest album 119, guarantee an epic response when experienced live. Viewed by critics as proudly carrying the torch for the next generation of punk rock bands, TRASH TALK’S latest offering is just like a long awaited, welcomed and powerful kick in the guts.

Rounding out this monster line-up will be none other than Arizona punk rock royalty AUTHORITY ZERO. With four studio albums under their belt, two live acoustic albums, and two EP’s, and the release of their latest album ‘The Tipping Point’, AUTHORITY ZERO are guaranteed to get the skank pit in full swing.