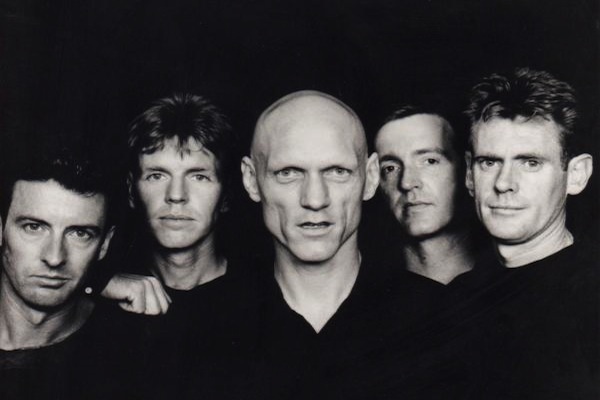 Sony Music is proud to announce Midnight Oil‘s 1990 New York concert, ‘Black Rain Falls‘, will be released for the first time digitally and on DVD on Friday June 20th in support of the opening of the exhibition „The Making Of Midnight Oil‟ at the Manly Art Gallery & Museum on the same day.

On May 30, 1990, Midnight Oil interrupted their North American tour for a “special guerrilla action” outside Exxon Oil headquarters on the crowded Avenue of the Americas in midtown Manhattan. The agitprop event from the back of a flat-bed truck drew more than 10,000 people out of the nearby office buildings and onto the street. The Oils were responding to one of the worst environmental disasters in US history when nearly 11 million gallons of oil were spilled onto the pristine Alaskan coastline by the Exxon Valdez. Twenty five years later the effects of the spill on the landscapes and wildlife of southern Alaska are still being felt.

“There are things we think are so important that they have to be said,” lead singer Peter Garrett told a packed international press conference after the performance, “and the best way we could say it was with song. What happened this morning was just another of the things that this band has tried to do for the last decade or so. We want to take some of the issues that are in the songs back onto the streets where they belong.”

The DVD features all six songs captured live that day: “Progress” (From the 1986 EP, Species Deceases); “Sometimes” and “Dreamworld” (from 1987‟s Diesel And Dust); “Blue Sky Mine” and “River Runs Red” (from Blue Sky Mining, 1990); the apropos tribute to John Lennon, “Instant Karma” and the video clip for Midnight Oil‟s “King Of The Mountain” (also from Blue Sky Mining), plus commentary on each track from the band.

In addition to the „Black Rain Falls‟ release Sony Music is for the first time releasing the physical remastered versions of these 7 classic Midnight Oil albums: Midnight Oil, Head Injuries, Place Without A Postcard, 10,9,8,7,6,5,4,3,2,1 , Red Sails In The Sunset, Diesel And Dust and Blue Sky Mining, as well as the EP‟s Bird Noises and Species Deceases.

As Rob Hirst puts it „The first crowd we ever pulled was on the Northern Beaches – in a long- demolished surf-pub called the Royal Antler Hotel. So it‟s fitting that our first ever exhibition is in Manly, where some of us still live and make music. It‟s a Midnight Oil exhibition, sure. But it‟s also the story of a time when music – loud, fast and original – was all that mattered. And about the bands and the beer-halls and the smoky, sweaty, sticky joy of it all.

The exhibition will showcase rare and iconic items including stage props, instruments, protest banners, hand written lyrics, photographs and posters sourced from public and private collections as well as the band‟s own archives. It will also highlight the band‟s various actions across the years including the original 30 ft wide banner from the „Black Rain Falls‟ concert with the wording Midnight Oil Makes You Dance, Exxon Oil Makes Us Sick‟.

“The Making Of Midnight Oil” will be on show from 20th June until 7th September 2014. Entry is Free.The exhibition is located at the Manly Art Gallery & Museum is at West Esplanade, Manly NSW 2095. The Gallery is open 10am – 5pm Tuesday – Sunday